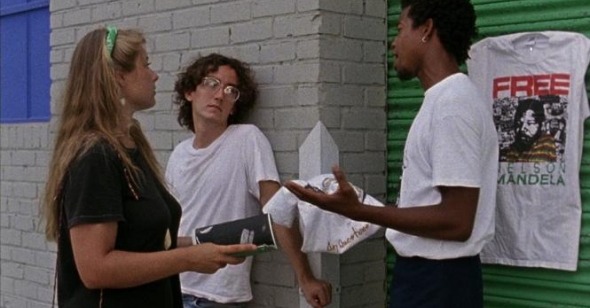 Where Are the Youth Gone Mild
Eric Hynes on Slacker

While the United States and its allies mark the 60th anniversary of D-Day with uncomplicated pride and gratitude, another major anniversary is passing more quietly—it’s been 30 years since Richard Nixon resigned from the presidency in the wake of the Watergate scandal, and nearly 30 years since our nation’s belated, belabored retreat from Vietnam. Watergate and the failure of the antiwar movement still cast long shadows—our current youth culture’s DNA carries more than a trace evidence of attitudes and feelings developed during that time, despite attempts by the current administration to convince us the situation in Iraq is WWII: THE SEQUEL. Though not wholly born of those times, we can credit the late sixties and early Seventies with our vast, matter-of-fact distrust of our political leaders and of the entire political structure, as well as our suspicion that there’s nothing we can do to change or save a system that’s inherently corrupt. We’re too wise to believe that things could get better, and have grown to distrust belief itself; that participation is tantamount to self-delusion, and that keeping our distance from the hypocrisy is the only way to remain clean and true to our ideals. That our nation’s shift farther right is only further proof that it was that way all along, and that activism within the two-party system is and always was futile. We can only sit back and wait for the barbarians to come—a perfect time to revisit Richard Linklater’s Slacker.

Made about halfway between here and Watergate, Slacker is acutely aware of the post-Sixties drift its characters are riding. Also, despite maintaining a critical distance from its subjects, it contributed to another decade of white liberal anomie, its satire subsumed by the winking alterna-angst that pervaded youth culture in the Nineties. Through its assembly line of talking heads, it described a generation of burnouts who seemed too young to be so jaded, but were, in their defense, living in a third consecutive Republican presidency. After its release, there was a blip of optimism when a Democrat won the election, but Clinton’s presidency was a false positive—we were still sloping to the right—and it only seemed to foster more disaffection. Why vote, what difference did it make? By the time the Supreme Court ended the 2000 election, we rolled our eyes and acted as if we’d seen it all before.

My feelings and observations about Slacker are different today than when I first watched it on the little TV/VCR in my dorm. Not that I didn’t appreciate its free-floating, fly-on-the-wall non-narrative style, nor did I mind feeling smart for going to college and getting the copious references to Dostoyevsky, Nietzsche, Scooby Doo, and the Smurfs. But I also distrusted anything that I was supposed to like, especially sixties culture, (perennially popular on American college campuses and a key ingredient in Slacker’s stew), fervently avoided dieting on anything but contemporary music or movies, and had an allergy to hippies. I’ve still got that allergy, but can see the film a bit clearer now, feeling further from its subjects—some of whom were my contemporaries—and closer to its spirit. Finding an appropriate distance from Slacker is essential to acknowledging its achievement, which is due in part to Linklater’s own careful negotiation of distance from his characters and their ideas—which, more often than not, are elaborate arguments for distancing themselves from others.

Linklater found the perfect form for his subject, his script and camera meandering from one lazy lecture to another, the film itself a schizophrenic run-on sentence full of schizophrenic run-on sentences. I admire any work of art that finds the right vessel for its ambitions, even if those ambitions are rather modest. But what seemed modest, small even, about Slacker the first time around, now seems crucial to understanding recent American culture. Conversely, what seemed more ambitious about Linklater’s Waking Life—a bolder, technically astounding, and dizzyingly philosophical retake on Slacker’s monologue-o-rama—looks much smaller after only three years on the shelf. For all their navel-gazing, the characters in Slacker knew their past—they fought with it, often misread it, and seemed limited to only the most recent, claustrophobic past, but what they knew, they knew. Waking Life knows history, too, but only Linklater’s history. Animated, appropriately, to enhance the feeling of liminality that its talkers contemplate, Linklater’s more mature work focuses on metaphysical ideas, hewing close—even while bouncing around the globe and switching speakers and styles—to its central question about the nature of reality. Actors and characters resurface from Linklater’s previous films, and Linklater’s own opening monologue from Slacker is recited practically verbatim. It’s as if he looked back over his work and decided that what made them unique and compelling—and of course unified—were these questions of reality and impermanence. But this does Slacker, at least, a disservice. What I find compelling about Slacker—even though I still find most of its characters intolerable—is not the regurgitated ideas, but the fact that these people have retreated to those ideas. I stop listening to the specifics of their arguments and start hearing a chorus of justifications for tuning in and dropping out. With Waking Life, Linklater seemed to have joined them. He wasn’t the only one (and who better to illustrate the trend?), but some Slacker-like satire could have helped. Still, I loved Waking Life in 2001, but that was when we were all still sliding down the postmodern rabbit hole.

Before I say “we” again, I should specify that I’m talking about the people usually depicted in Linklater’s films, who, I assume, are the same people that see his films: left-leaning, mostly white college graduates in their twenties and thirties (Linklater himself is now in his early forties). I have to admit that upon hearing about new Linklater films, my first response was often revulsion. It does appear that he, more than any other director, got things right about us. He located flashpoints of unified mood and behavior for an otherwise religiously individualistic culture. We were not a people that worried over or even considered “the collective.” Rather, we collectively strove to receive our entitlement. As Slacker morphed from satire to cultural trend, liberal white disaffection hit the mainstream. So did Linklater. Though set in 1976, his second film, Dazed and Confused, looks a lot like 1993, and without a war to protest or a Nixon or Bush to unseat, all we had to worry about was how many brain cells we could live without and whether or not to blow off school. Before Sunrise tracked our ubiquitous tours of Europe (how did we afford our rock & roll lifestyles?) that promised romance and sparklingly fleeting international conversation. School of Rock felt good after years of debating whether or not to actually pursue a career, and it was good to know that my trivial knowledge of progressive rock was useful, let alone compelling, to another generation of (this time multicultural) college-bound nerds. Though somewhat self-congratulatory, School of Rock at least nudges slackers back into society, and without excising their rebelliousness. It’s been a long time since we unironically formed a band and made a lot of noise.

Which is, finally, a long way from the complacency depicted in Slacker. But, as different as they are, Slacker and School of Rock are Linklater’s most political films. While Rock depicted a return to engagement at its most basic level, Slacker depicted a culture born of disengagement that borrowed activist language to argue for irrelevance. One by one, Sixties-era leftist causes are belittled and reconfigured. Rather than fight for workers’ rights, the slacker thinks that workers are stooges, and not working is rebellion. One calls himself an “anti-artist.” Another has “given up not only on my own people, but mankind entirely.” An old tool for political campaigning—the car megaphone—is used for anarchic ramblings. Characters disassociate themselves from others by employing collective designations such as “humans” and “mankind” to claim philosophical distance from the world around them. But along with these perversions of progressive politics, there’s also ample evidence of how radicalism always had its dark side, and how its condescending tendencies foreshadowed our drift into cynicism. Many voices in Slacker, like the forebears that they quote and echo, know the real truth. They may not be talking about The Man, or instructing factory workers—or Russian peasants, for that matter—on what they should want from their lives, but they do know that JFK wasn’t felled by a single bullet, and that nothing the media says is ever true. That some are truly enlightened and we should all strive to be so enlightened. That the political system is a sham, and that subversive messages can be found in children’s cartoons. In the years since Slacker’s release, such sermons still pervade, and their tenor has hardly changed. They still sound self-satisfied, and are still spoken for the benefit of the speaker rather than for the deluded, unschooled masses. We hoard our knowledge, and make it our identity.

What is truth, anyway? What is real? Few things identify us, our education, our media-savviness, our postmodernist bone structure, more than our comfort with these questions. The Matrix felt so right, it was as if we’d half-written it ourselves. And while we fumble about in the dark, laughing at those who think they can see, truth keeps happening. Reality, despite all its complications, really does exist. We often feel entitled to pretend it doesn’t. To pretend it’s all in our heads. But we really do have a history, and change is truly necessary. At the risk of repeating our mistakes or making things worse, where do we go from here? The final sequence in Slacker stunned me—I didn’t remember it from my first viewing. A group of young people are horsing around in a convertible, filming each other with Super-8 cameras. We see what they’re filming, and it’s a jumpy, zany, energetic affair. Suddenly it’s a Richard Lester film, like A Hard Day’s Night or Help!—Sixties culture at its most promising and seductive. While he’d alluded to it all along, Linklater allowed himself this last, quick, direct equation. With a break from the past that is both rebellious and responsible, a young man flings the old camera into the lake, yet its beautiful, blurry, and exciting moving images continue for a few moments longer. Someone must have retrieved the film.