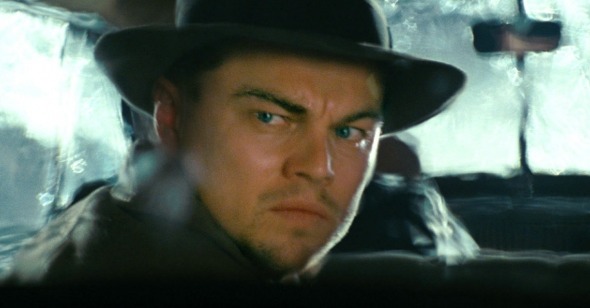 In the Fog
Aliza Ma on Shutter Island

During a three-month visit to the set of Shutter Island in April 2008, Argentinian filmmaker Celina Murga observed Martin Scorsese with his actors, noting in a diary for Cahiers du cinéma that he was shooting in subtly varied angles of close-ups and directing them to look at the camera shaft when delivering monologues. The result of this method is a disquieting theatrical effect—mining what Murga called the “cinematographic power of the look”; Scorsese, she wrote, made the characters seem as if they were “spouting their madness” directly at the audience. Such heightened aesthetic tension dominates Shutter Island, from its tightly schematic maze-like formal design to its surrealist mise-en-scène. Extending the generic constituents of pulp mystery to their extremes, the film is a work of horror that manifests the psychological scars of the postwar 1950s, which give shape to the existential parable of its main character and subject, U.S. Marshal Teddy Daniels (Leonardo DiCaprio).

Based on the novel by Dennis Lehane, Shutter Island is set in 1954 on a remote island near Boston that accommodates the Ashecliffe Hospital for the Criminally Insane. Daniels arrives by boat to the asylum with his new partner, Chuck Aule (Mark Ruffalo), to investigate the disappearance of a patient while also seeking to avenge a pyromaniac who is responsible for the death of his wife. Though he is occasionally interrupted by doctors Cawley (Ben Kingsley) and Naehring (Max von Sydow), who seem to be hiding chilling secrets about the asylum’s operations, and haunted by vivid hallucinations of his past, Daniels’s furtive pursuit through Ashecliffe becomes a ceaseless, bottomless internal psychological journey, which finds a physical analogy in the hospital’s awesome and terrifying architectural edifices.

The first image in Shutter Island is of the boat carrying Daniels and Aule as it wades through an Ugetsu fog. The characters appear out of the mist like fresh Rorschach blots materializing on screen. It recalls a passage from Lehane’s book: “You surfaced without a history, then spent the blinks and yawns reassembling your past, reshuffling the shards […] before fortifying yourself for the present.” Indeed, Daniels is a stranger, not only to Aule and the people at Ashecliffe, but also to himself. In most of Scorsese’s films, such as Mean Streets and Taxi Driver, external environment is imbued with a character’s internal emotional qualities—what David Bordwell calls “a realistic motivation [to convey] expressionist effects”—but with Shutter Island, Scorsese eschews all strategies of realism to convey the state of mind of a character who is completely alienated from himself and his surroundings.

What begins as a boilerplate detective story gradually grows more complex—both structurally and visually. Daniels’s visions of his deceased wife and flashbacks from a Dachau concentration camp where he served as a G.I. encroach upon and become inextricable from his external environment—a persistent hurricane outside seems to invoke, or even summon, these waking nightmares. Meanwhile, the film oscillates between discomfiting close-ups and extreme long shots, with cinematographer Robert Richardson employing radical canted angles and flattening planimetric perspectives to foreshorten and abstract the severe landscape of the island. The film has an increasingly accelerated rhythm, making concrete, diegetic reality seem like gossamer-thin aberration, and bringing forth a psychological portrait that has a liminal quality, a narrative that’s constantly being imagined and reshaped by its subject.

Highly artificial, the mise-en-scène of Shutter Island makes a pageant of 1950s American iconography: the environment inside Ashecliffe is hued in pallid Formica shades and Daniels’s visions are saturated in patina jewel tones. While the amplified aesthetic may seem ahistorical—the film has been criticized for being a garish postmodern pastiche—Scorsese uses these cinematographic properties to dredge up the conspiracy-addled undercurrents in the period (a time when the director would have been an impressionable young teen), to recreate a certain psychological atmosphere rather than fashion physical verisimilitude. At the time of this writing, it is Scorsese’s last feature to be shot entirely on film. Choosing the 2.35:1 aspect ratio (which conjures up memories of 1950s Cinemascope), he uses the frame to exaggerate the interplay between the vertical and the horizontal, compressing the film’s spaces until the screen is suffocated, and escalating the sense of foreboding and claustrophobia.

Set designer Dante Ferretti described Ashecliffe as an “island within an island,” emphasizing the heightened unreality they were trying to achieve, despite having shot on location. An abandoned state hospital and the exteriors of a textile mill in Massachusetts were the skeletons onto which Ferretti draped his exacting designs, modeled in detail and to scale long before filming began. The interiors have the disorienting, labyrinthine layout of an M. C. Escher drawing, while the exteriors—a lighthouse containing the asylum’s most dangerous patients and an ornate, slightly out-of-place cemetery that Ferretti built entirely for the film—recall symbols from noir and Gothic traditions and embody the metaphysical uncertainty of the postwar period. Dr. Cawley’s office is the tucked-away microcosm of this world, with engravings of Dr. Benjamin Rush’s Tranquilizing Chair and passages from William Blake’s The Marriage of Heaven and Hell decorating its walls.

Elemental properties of fog and rain outside and smoke and ash inside add to the dreamlike quality. Shutter Island is a film of vapor: Dr. Cawley’s aura of malice is magnified at moments when his head is enshrouded in the smoke from his pipe; when Aule gets separated from Daniels in the final act, his absence is represented by a single half-smoked, still-burning cigarette left on the cliff. Scorsese represents the breakdown of Daniels’s subjective identity by intermingling all the elements in the frame, as when a fire in the ward wakes Daniels to the extinguishers raining down on his bed, as well as the specter of his wife reaching out to him, aglow with molten ashes—a scene melding the spectral and the carnal. The liminal quality of these images finds its reflection in passages from Gustav Mahler’s “Quartet for Strings and Piano in A Minor” on the soundtrack—a work which, it’s worth noting for its narrative aptness, was never completed and thought to be lost in the war until his widow recovered the notes in 1966.

An unlikely relative of Shutter Island never cited among Scorsese’s many well-documented cinematic allusions is Hiroshi Teshigahara’s 1966 film The Face of Another. Based on a novel by Kobo Abe, the film’s high modernist abstraction is an extended metaphor of postwar existential suffering. Themes of doubling and repetition in Face’s visual motifs—an array of fingerprints, plastic limbs, and roughly hewn calligraphy dominate the opening sequence—and in the narrative structure convey “the tenuousness of identity,” per James Quandt. Telling the story of Okyuama, a self-exiled, disfigured man who undergoes plastic surgery to temporarily change his face, the film employs a brilliant glass maze of a mise-en-scène—designed by metabolic architects Arata Isozaki and Masao Yamazaki—that functions also as a visual analogy of its protagonist’s fragmented identity. An unmoored secondary plot—about a young woman who works as a nurse in an oceanside asylum for patients suffering from war-related trauma—lends a through-the-looking-glass dreamlike quality to the main story. (Though they never converge, Teshigahara uses transitions between the worlds to make it look as though they are spilling into each other). Okuyama’s relationship with his “experimental psychiatrist” doctor, Hira, like that of Daniels and Aule, is an exchange of ego and id, and Okuyama’s betrayal and eventual murder of Hira is his internal psychological struggle manifested as flesh and blood. Teshigahara also chose an anachronistic aspect ratio—an increasingly obsolete square Academy frame—as a cage-like frame for Face’s extreme compositions, amplifying the artificial qualities that convey the subjective and transmutable milieu surrounding Okuyama.

Similarly attuned to the internal horrors that provoke individual responses to historical devastation, Shutter Island sculpts its contours from the psychological and spiritual torment of its main character, creating a theater of cruelty. (After World War II, Antonin Artaud, who suffered violent hallucinations and 51 electroshock treatments, famously evoked the metaphor of a “body without organs” to refer to this ineffable postwar trauma.) In an interview for the film, Scorsese said that, to convey the atmosphere of the postwar decade, he wanted to “try to use the vocabulary of cinema’s past . . . and to change that vocabulary whenever I wanted.” Though this vocabulary is deeply inscribed onto all his films, Shutter Island—compact in concept, visual design, and subject matter—may be the most condensed example of this imperative. The unnerving inside-out quality of Shutter Island’s psychological portrait draws from and builds on Scorsese’s beloved film noir tradition to a point of abstracting the genre, with its exaggerated visual motifs and fragmented subjectivity. Scorsese goes beyond mere cinematic reference: the lighthouse, which appears like a monument of solitude in the isle-scape, seems to directly recall Italian metaphysical painter Giorgio di Chirico’s The Nostalgia of the Infinite; and the strange sense of eerie foreboding inside the asylum wards brings to mind the haunting depictions of isolation and despair in the canvases of Edward Hopper and George Tooker. With its expansive visual palette and thrilling experimental impulse, Shutter Island stands alone in Scorsese’s filmography: a hall of mirrors reflecting an endless horror that is all the more terrifying for not being completely revealed.