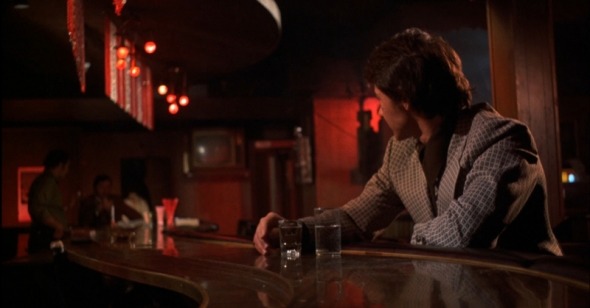 In 1967, upon seeing Martin Scorsese’s debut feature, Who’s That Knocking at My Door, Roger Ebert famously heralded the arrival of a director he felt would prove to be an important new artist. He had remarkable foresight: after all, how many promising filmmakers fail to live up to their potential or, worse, subsequently squander their talent with vapid projects or commercial compromises? Six years later, following sophomore effort Boxcar Bertha—a transitional and, well, compromised exploitation picture for Roger Corman—Scorsese would himself announce his true artistic arrival with Mean Streets. And he would do so pre-credits, with two lines of dialogue that open the film against the vacuum of a blank, black screen: “You don’t make up for your sins in the church. You do it in the streets.” These words, more than any critical decree, effectively laid the soil for a thematic landscape whose topography has since proven surprisingly vast. Stylistic seeds were sown in prior efforts, from the use of rock and R&B songs in Who’s That Knocking to the restless handheld camerawork and erratic editing experiments of both that film and Boxcar Bertha. But it was the instinctive, holistically integrated flourishes of Mean Streets that would construct a working model for much of Scorsese’s future output.

Disarmingly personal, Mean Streets is at once Scorsese’s most autobiographical project and a film of uncomfortable sympathies and character identification. A Warner Brothers production, it exemplifies an era of studio moviemaking in which adult-oriented, idiosyncratic stories could find equally diverse audiences via valiant producers and distributors. Most of Scorsese’s work in the crime genre since (see Goodfellas, Casino, The Departed) has dealt with large and, in some cases, famous underworld organizations, nationwide syndicates worthy of grand narrative arcs with the capacity to support allegorical subtext. Mean Streets, by comparison, is modest in scope, charting the fate of a few young hoods over the course of a handful of nights within a narrow geographic radius. Scorsese’s Manhattan—a seedy, unglamorous haven for junkies and hustlers—is evocative of a bygone but still recognizable borough, one whose racial prejudices, sexual diversity, religious traditions, and political tensions had congealed into a pot of contradictory impulses and indignities that in many respects exists to this day.

Many of these conflicts are personified, only to be promptly internalized, by Charlie (Harvey Keitel), an Italian-American whose belief in camaraderie and cooperation is consistently challenged by both his professional pursuits and personal passions. Unable to reconcile these aspects of his life, Charlie alienates both the uncle he works for, Giovanni (Cesare Danova), and his secret girlfriend, Teresa (Amy Robinson), an epileptic whose condition is largely misunderstood by everyone when not outright chastised—even acknowledging his relationship with her would spell financial as well as familial disaster. The key to Mean Streets’ effectiveness is in how Scorsese shows the professional and personal coming together as a catalyst for violence, inextricable affairs that nonetheless cannot reasonably coexist.

Though it begins with a series of character introductions and ends at a gravely definitive juncture, Mean Streets does not proceed in a traditionally linear manner. Much of the film is made up of asides, moments of consumption, conversation, and offhand masculine conviviality that at first glance appear to have no bearing on the plot. When not hatching small-time scams, running numbers, or attempting to turn hot goods into a quick profit, Charlie and his accomplices are boozing at the local bar (run by their friend Tony, played by David Proval), jousting with metal garbage-can lids, and, in one memorable sequence, after getting stiffed on a payment by a couple of high school kids, taking their paltry earnings to the local movie theater (“How much you get . . . ? Twenty dollars?! Let’s go to the movies!”). Grounding some of these more freewheeling tendencies is the weight of spirituality, typically manifest in moments when Charlie’s self-doubt and guilt lead him back to the comforts of the church. Throughout the film we hear Charlie in voiceover contemplating religious accountability; spoken by both Keitel and, in a pointed bit of authorial self-recrimination, Scorsese himself, these inner monologues are severe meditations on fear and fate and desire. “The pain in hell has two sides: the kind you can touch with your hand, and the kind you can feel in your heart,” Charlie declares, before concluding, “And the worst . . . is the spiritual.” Each character in Mean Streets eventually emerges from the commotion of the outside world with his own unique drama, but it is Charlie’s quiet spiritual and emotional maturation that is most deeply felt, as trial-by-fire gestures (on multiple occasions he literally finds his hand drawn to a flame) suggest an ultimately unfulfilled existence.

Charlie’s conflicted, inquisitive demeanor is contrasted mightily by best friend and quintessential thorn-in-the-side Johnny Boy (Robert De Niro), a reckless, selfishly uninhibited man-child up to his fedora in debt. Prior to Joe Pesci’s turn as Tommy DeVito in Goodfellas, Johnny Boy was Scorsese’s ultimate loose cannon; having no intention of making good on his fiscal obligations, Johnny Boy essentially spends the entirety of the film ducking angry mobster Michael (Richard Romanus) and using Charlie as both scapegoat and go-between. Mean Streets marked De Niro’s first collaboration with Scorsese—a partnership that would last for many years and has long since entered the pantheon of legendary cinematic alliances—and though he wasn’t well known at the time, the actor nonetheless received a star’s entrance, scurrying down the sidewalk as a mailbox unexpectedly explodes behind him. Johnny’s smirk of accomplishment at this is the first sign that neither character nor audience should take this guy’s actions lightly.

But it is to the credit of both De Niro and Scorsese that they are able to render Johnny Boy, despite his overwhelming indecencies, an instantly iconic character, if not an endearing one. Waltzing into the bar in slow motion, bathed in red light, the Rolling Stones’ “Jumpin’ Jack Flash” blaring on the soundtrack, Johnny is easily the coolest guy in the room. “You talk about penance and you send this through the door,” Charlie proclaims to himself as he watches the entrance in near disbelief. Not only has Johnny brought two girls with him—neither of whose names he can remember—he buys everyone drinks on a tab he can’t pay, spins a fantastic yarn about a recent escape from an angry creditor, and dispenses a couple of offhand racial and sexual remarks for good measure. Even as we naturally decry this dubious behavior, Scorsese’s cinema seems to argue that deep down we all wish we could exhibit such devil-may-care composure. It’s a provocative contradiction in entertainment terms that the director has continually challenged his audience to consider, up to, and perhaps most controversially with his most recent film, The Wolf of Wall Street.

The psychological instability of the characters in Mean Streets finds a useful corollary in the frenetic energy of Scorsese’s subtly mounting narrative. Captured with raw immediacy, featuring kinetic camerawork courtesy of cinematographer Kent Wakeford,the seemingly humorous incidents continue to gather consequence as alliances are strained and the terms of the characters’ brotherhood are called into question. Whether working with unadorned, mostly handheldvisuals, as here, or in a more formally precise mode suited to such adaptations as The Last Temptation of Christ or The Age of Innocence, Scorsese ably formulates a compositional dynamism, rendering his films consistently exhilarating even as he continues to explore wildly disparate genres. In Mean Streets, we witness the overwhelming bustle of Little Italy’s annual outdoor Feast of San Gennaro, which Scorsese displays throughout in the style of his neorealist forefathers, and yet despite the hive of activity, it registers as somehow quaintcompared with the tensions festering amid the dimly lit interiors (many of which were actually shot in Los Angeles). Seemingly jovial conversations between friends turn unexpectedly violent, the larger criminal fraternity paradoxically threatened and sustained by such outbursts.

By that measure, the celebrated billiard-hall sequence may very well be Mean Streets in microcosm. A mutually beneficial transaction between associates devolves from business to banter (“I’m a mook?! What’s a mook?”) to full-on brawl—and Scorsese stages it like an awkward fumble between cohorts who have no intention of escalating things toward actual bloodshed. Of course, not everyone is so forgiving, and at the film’s climax, when Johnny Boy finally pushes Michael too far—the situation now beyond anyone’s control, the future of all these intertwined relationships sealed as if by fate—the inherent incongruities of this lifestyle reveal a dark abyss at the heart of the streets that proves impossible for these characters to avoid. In its autobiographical aspect and stylistic intuitiveness, Mean Streets established an artistic autonomy for its director that was immediately felt in his methodology going forward; temperament and narrative perspective may have shifted the following year with Alice Doesn’t Live Here Anymore, but in its aesthetic adventurousness and individualist concerns, Mean Streets leads seamlessly into more tragic tales of warped masculinity such as Taxi Driver and Raging Bull. That Scorsese has remained so preoccupied with such themes, painting such unforgiving subjects and stories in such detailed strokes, proves not only an artistic commitment to the histories of a specific American culture but also an unbreakable, unshakable kinship—the camera his brush, the city his canvas.