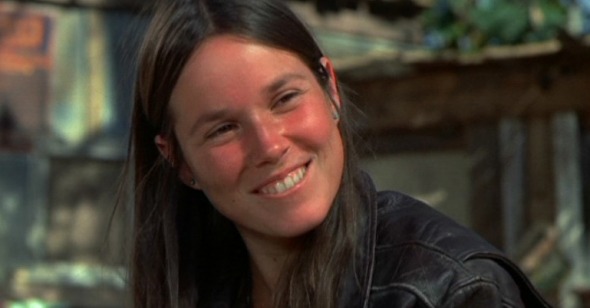 Off the Rails
Kristi Mitsuda on Boxcar Bertha

In between his ur-text debut, 1967’s Who’s That Knocking at My Door, and the breakout of 1973’s Mean Streets, Martin Scorsese made a movie now thought of mostly as a footnote. Despite garnering some critical attention for his first feature, including a rave from Roger Ebert, Scorsese struggled in the period following to establish himself in the industry. He was hired then fired as director of The Honeymoon Killers, taught film classes at alma mater NYU, and assisted in the editing of Woodstock. After the success of that historic documentary, he found more editing work on the similarly themed Medicine Ball Caravan (a.k.a. We Have Come for Your Daughters), precipitating a move from New York to Los Angeles, where other movie brats—including George Lucas, Brian De Palma, and Steven Spielberg—also strove to make their marks.

So when Roger Corman, impressed by Who’s That Knocking, offered him his first commercial directing job on Boxcar Bertha (1972), Scorsese accepted. By the early 1970s, Corman had established his profitable B-movie brand under the auspices of American International Pictures, proving adept at capitalizing on the zeitgeist in sixties counterculture films like The Wild Angels and The Trip, as well as tapping emerging talent (including Peter Bogdanovich and Francis Ford Coppola, whose The Godfather would win the best-picture Oscar for 1972, the year of Bertha’s release). Boxcar Bertha was conceived as a Bonnie and Clyde rip-off and follow-up to AIP’s moneymaking Bloody Mama, which starred Shelley Winters as Ma Barker (and, incidentally, Robert De Niro as one of her brood of boys). But only a thin line connected the two pictures: an aim to feature a female gangster as the lead.

Or so was the plan. Julie Corman, Roger’s producing partner and wife, had discovered Bertha Thompson’s autobiography, Sister of the Road (later revealed to be a fictionalized account based on a composite), and envisioned a movie celebrating a woman living on the outskirts of conventional society. Yet though titled for Bertha and theoretically based on her story, the movie still gets away from her. Within the first few minutes, Scorsese indicates its true subject. The film starts promisingly on an opening shot of a kind rare in the director’s oeuvre: a close-up on a female face, specifically Barbara Hershey’s eyes as they gaze up into the sky (suggestive of the introductory frames of Juliette Lewis in the later Cape Fear), seemingly signifying that the narrative will reflect her perspective. But this is quickly overturned when, a few shots later, Scorsese cuts to Bertha’s bare leg as she absentmindedly hikes up her dress to scratch it; she’s positioned in a shot–reverse shot that places David Carradine, looking on as Big Bill Shelly, squarely in the subject role.

The film follows Bertha as she starts hitching rides on trains across the South during the Depression, her journey triggered by the death of her father after he’s financially pressured into crop-dusting despite a mechanically unsound plane. Bertha’s birth as a freight hopper here is in stark contrast to the one described in the book, in which her mother’s open-minded lifestyle inspires her to set off of her own accord to explore the world. Ultimately, the movie traces Bill’s arc as railroad union activist turned train robber, while Bertha drifts along, trailing after him—whereas in the source material she’s a self-identified hobo, wandering purposely in search of experience.

Early on, Bill and Bertha (Carradine and Hershey were real-life lovers at the time) consummate their relationship in a boxcar in disturbing fashion, as he pushes her onto a hay bale despite her reluctance and soothes her with the words “You’ll get used to it sooner or later,” to her beaming acquiescence—emblematic of Bertha’s brand of passivity. The two eventually hook up with Rake (Barry Primus) and Von (Bernie Casey); soon Bertha shoots a gambler in defense of Rake, before breaking him, Von, and Bill out of jail. After this, the gang embarks on its first robbery. Bertha is ostensibly the film’s driving force, but her narrative continually gives way to Bill’s. When their roads diverge, the camera often abandons her to pursue him: first, when he’s jailed after getting in trouble with union busters; then as he goes to his union hall to donate the money from his first train robbery; and again when he lands back on the chain gang.

Although clearly a Roger Corman production—Bertha features the requisite action and nudity, which the exploitation master reportedly advised the young filmmaker to include every fifteen minutes or so—signs of Scorsese are everywhere. Shot in twenty-four days in Arkansas on a small budget, the movie feels as ramshackle as basic B fare, and lacks the restlessly roving camera that would come to define the director’s work. But there’s the Scorsese cameo, as a brothel client; an attentiveness to the propulsive properties of musical mappings over visuals (in this case he relies heavily on Delta blues); emanations of cinephilia (opening black-and-white iris shots introducing the players; Bertha making a Wizard of Oz reference to a john as she guides him into a bordello bedroom during a stint as a prostitute, “Oh, pay no attention to that man behind the curtain!”); and virtuosic violence in the last shootout scene, with its striking use of dolly shots and jump cuts.

And then there’s the crux of the story, which is Scorsese to its core in its refracted Catholic concerns. The film’s prioritization of Bill is clearer than ever come the finale as he’s graphically crucified to the side of a train by railroad agents. Written by Joyce H. and John William Corrington, the script was left in Scorsese’s hands by Corman to do with as he would—who trusted the director after seeing his extensive storyboards—and in simpatico convergence, the crucifixion denouement was present in the original screenplay. As Bertha runs after the departing train to which Bill’s body is nailed, the director has a perfect opportunity to utilize what would later become a signature shot: a God’s-eye view on the scene.

On-screen, this final sequence’s egregious symbolism seems on the verge of toppling into parody, except that it’s completely sincere. Scorsese sets Bill up as a martyr who sacrifices himself via his unionism for the greater good of the common man; one scene even has the gang taking refuge in a church. But though Bill makes proud proclamations such as “I ain’t no criminal; I’m a union man,” he doesn’t appear to actually do much for the cause. On one early occasion, he rallies his peers, directing them to attack railroad agents looking on, a self-serving diversionary tactic to steal away with Bertha to that boxcar. He later offers petulant self-justifications about his involvement in the train robberies as a way to take down the railroad. Thus, the grandiosely violent conclusion invests him with no small measure of unearned gravitas (not helped by the charisma-challenged Carradine). And the imposition of this angle onto what was once intended to be a feminist-spirited movie hobbles its legibility, placing Bertha in the position of follower, with Hershey enacting a kind of proto–Mary Magdalene performance (she would later reprise the role in earnest in Scorsese’s The Last Temptation of Christ).

Sexism in Scorsese’s work has been much debated in light of The Wolf of Wall Street’s forthright and intentionally excessive depiction of misogyny. Such representations do not, of course, equal endorsement. Nevertheless, one can imagine a spectrum of possibilities an artist can choose to explore or not. Other than Ellen Burstyn as the titular character in Alice Doesn’t Live Here Anymore, and to lesser extents Liza Minnelli’s Francine Evans in New York, New York and Michelle Pfeiffer’s Ellen Olenska in The Age of Innocence, fully realized female characters haven’t figured much in the director’s work (perhaps unsurprising given his professed wrestling with a virgin-whore complex). His career has been built primarily on inquiries into masculinity, and he’s perceptively painted portraits of male insecurity in the face of female sexuality, from Who’s That Knocking to the iconic Raging Bull and beyond. But women in Scorsese’s movies remain for the most part undefined except as extensions of the men, drawn in a flat manner that doesn’t offer a counterpoint to the protagonists’ often narrow worldviews. As a female viewer, watching a Scorsese film can feel akin to attempting conversation with someone who won’t make eye contact with you.

Given the oft-cited influence of the French New Wave on the filmmaker’s work, Eric Rohmer and his “Moral Tales” (the last of which, Love in the Afternoon, came out the same year as Bertha) might serve as a useful comparison. A Catholic like Scorsese, Rohmer in each of the cycle’s six films focuses on a man struggling with a personal philosophical code of conduct in relation to the opposite sex, using the situations as a way to illuminate his protagonists’ hesitancies, narcissisms, and self-delusions. More than just projections of the men in their orbit, though, the women are beguiling beneath their beautiful surfaces; as much as they mystify, they challenge in their complexities and contradictions, generally revealed by way of conversation in the director’s talk-heavy films. Although we’re not positioned to align with them, Rohmer provides his female characters breathing room to become individuated humans—something Scorsese does not often do.

Such is the case with Bertha. Marginalized within her own story, she nevertheless takes up a large amount of screen time, but Scorsese seems at a loss as to what to do with her. And her blankness creates a hole in the film. In the book, she’s articulate and spirited, and has a sense of social justice; she proceeds proactively to feed her wanderlust, her sexual and intellectual appetites. The movie reduces her to a starry-eyed simpleton (“What are these Reds?” she asks at one point of a man’s offhand reference to union strikers), mooning after Bill and not interested in much else. Bill is portrayed as serious, and Bertha as slapstick silly. During a holdup, she takes pleasure in commanding the men at gunpoint to alternately “stand up” or “sit down,” until he chastises her. During another robbery, she can barely keep her dress on, her straps falling off of her shoulders as she takes jewels from a railroad tycoon’s party guests, bragging about the prettier tiara she has at home.

Famously dubbed “a piece of shit” by Scorsese mentor John Cassavetes at the time, Boxcar Bertha today seems to have value largely for the hunting ground it provides auteurists. But the flick would prove fruitful for Scorsese for other reasons; he embraced it as a learning experience and, inspired by Cassavetes’s tough-love pronouncement to focus on something personal, returned to a script he’d tucked away called Season of the Witch. When he’d rewritten it to become Mean Streets, he hired Corman’s Boxcar Bertha crew to shoot it, and thus made his mark in the New Hollywood.