Who’s That Knocking at My Door 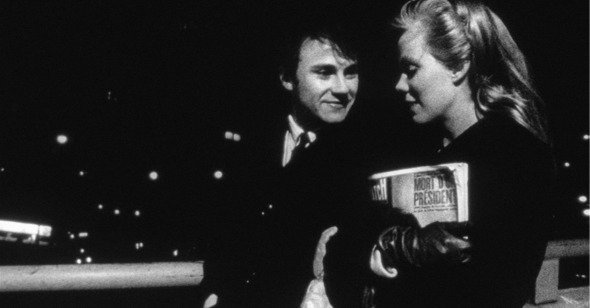 In evaluating certain directors, the committed auteurist must dig determinedly into early works to excavate the tropes, themes, and stylistic tics that lead like bread crumbs back to those canonized, signature films, often discovering clues that aren’t there. Films such as Stanley Kubrick’s Fear and Desire and Alfred Hitchcock’s more rote early movies like The Manxman or Juno and the Paycock prove relatively fruitless sources in these endeavors. But Who’s That Knocking at My Door (1967), Martin Scorsese’s first feature after only a few shorts made during his years at NYU, is assuredly not of this type. Before the opening credits kick in to Mitch Ryder & the Detroit Wheels’ “Jenny Take a Ride,” the director’s mother, Catherine—who’d go on to appear and sometimes cook in half a dozen more of her son’s pictures—has prepared a calzone for a kitchen table full of reverent children, Scorsese has cut to inserts of religious figurines, and J.R. (Harvey Keitel) and some cronies have initiated a backbreaking beatdown on some encroaching Puerto Ricans. With hindsight, it’s quite clear that this is the director of Goodfellas, if not Kundun, Hugo, or any of the numerous other films that fall outside the most superficial, popular understanding of Scorsese.

Knocking, filmed on weekends over the course of three years and subject to reshoots and name changes throughout, was conceived as the beginning of a never-completed trilogy about Scorsese’s coming of age in Little Italy, the third installment of which, Season of the Witch, morphed into Mean Streets, made six years later. Both star Keitel as the director’s Antoine Doinel–like surrogate, and both are concerned with the warping handicap of Italian-Catholic guilt (particularly how it poisons gender relations), the vivid particulars of life in certain New York enclaves, and the time spent macho-bullshitting and belligerently clowning with neighborhood buddies, who resemble lovable wastrels of Fellini’s I vitelloni, a Scorsese touchstone. Knocking’s clear technical shortcomings compared with Mean Streets are attributable to its low budget and scrounging and lengthy gestation. Scorsese’s claim that it’s the “first student film shot in black-and-white 35mm on the East Coast,” though charmingly qualified, is further asterisked by the fact that much of it was shot in 16mm and blown up after a disastrous test screening of a 35mm-only version called Bring on the Dancing Girls. This partially explains the film’s (not unappealing) grab-bag disjointedness, but only Scorsese can answer for the mild repetitiveness and indulgent fervor to wow despite limited means.

Stylistically, Knocking shares with Mean Streets a fondness for the combination of slow-motion tracking shots and counterintuitive, jacked-up-in-the-mix music, either a present-day rock song or an earlier pop standard. Scorsese has said that Kenneth Anger’s rock-heavy avant-garde short Scorpio Rising (1963) gave him the tacit green light to raid his own LP crates, and that he was inspired by the mix of varying music styles and daily street scenes (some of them violent) he’d absorbed just by looking and listening out his window in the old neighborhood. While it’s easy to trace the forebears of some of Scorsese’s visual tactics (the New York naturalism from Kazan’s On the Waterfront and Cassavetes’s Shadows, the quick-skipping “triple cuts” from the Truffaut of Shoot the Piano Player and Jules and Jim), the particular audiovisual juxtapositions in Knocking and Mean Streets are Scorsese’s own, and he’s remained a uniquely virtuosic soundtracker up through The Wolf of Wall Street, with its cues from Elmore James, Naughty by Nature, et al. Iconic scenes like Knocking’s goof-around gun party, set to Ray Barretto’s “El Watusi,” exhilarate with their strange audacity after each viewing.

Critically, Knocking also presents Scorsese, snidely dubbed a “movie brat” along with his post–French New Wave American contemporaries, already in full film-lover mode. Not shy about broadcasting his influences, the director fills the film with direct homages, like the montage of stills from Howard Hawks’s Rio Bravo and stylistic nods to Italian neorealists like Visconti (Rocco and His Brothers) and Rossellini (Rome, Open City), as well as the post-neorealist Bertolucci, whose success at the New York Film Festival with Before the Revolution at age twenty-three fired Scorsese’s competitive creative energies. Also incorporating excitable and shyly articulate takes on topics like John Wayne, Lee Marvin, and the Hollywood western placed into the mouth of J.R./Keitel but clearly ventriloquized by the director, Knocking is the Scorsese film that most invites the brat tag. On the Staten Island Ferry, returning from an errand, J.R. finds himself sitting next to a sylphlike blonde (Zina Bethune), never named, who’s reading an article in the French magazine Paris Match about Wayne. Their awkward ensuing conversation about The Searchers conveys not only Scorsese’s insecure-yet-charming need to insert his movie love into the narrative but also J.R.’s sexual fear and prejudices. J.R. (“That was some picture . . . some picture”) says everyone should like westerns, which can “solve everybody’s problems,” and launches into a discursive plot summary when Bethune’s character, credited only as “The Girl,” can’t recall if she’s seen it. She finally remembers it mostly as about Jeffrey Hunter and Natalie Wood’s characters, an early clue—like her elocution, sophisticated bearing, and the fact that she’s riding the ferry for pleasure—of the differences in taste and class (which temporarily don’t matter in the liminal space of the New York harbor) that will combine with J.R.’s naive religious misogyny to sink their relationship.

Knocking scarcely captured the zeitgeist like an Easy Rider or The Graduate; perhaps it’s because Scorsese made a movie about sexual repression in an age of sexual revolution. He has admitted to having a measure of misogyny instilled by his upbringing, telling Film Comment in 1975, “I grew up in a certain kind of culture: Sicilian, Roman Catholic; women were separate entities; and the Madonna-whore dichotomy encouraged fear of them, distrust, and, because they didn’t seem like real human beings, difficulty in relating to them.” This difficulty defines J.R., whose view of the Girl as “good” is destroyed when she tells him she was once raped; the suspicious and confused J.R. proceeds to visualize the encounter (flashes of which Scorsese returns to a few too many times, scored to distorted doo-wop by the Dubs). While the director clearly sympathizes with his surrogate’s naïveté, he’s just as harshly critical here as he is of all his worst offenders of masculine egotism, from Raging Bull’s Jake LaMotta to Goodfellas’ Henry Hill to The Wolf of Wall Street’s Jordan Belfort, who would inspire all that torturously stupid debate about Scorsese’s “feelings” toward his subject during that film’s theatrical run. After J.R., showing up buzzed at the Girl’s place at six thirty in the morning, “forgives” her for being raped, then immediately calls her a whore when she rebuffs him, it’s impossible to see him as anything other than clueless. Even Knocking’s notorious, mesmerizing Doors-scored nude interlude, inserted at the insistence of the soft-core producer offering the needed financial push, exposes J.R.’s hypocrisy, as it reveals the debauchery he allows himself but forbids his unrealistically sanctified Madonnas. Scorsese jarringly but deliberately sandwiches it in the middle of J.R.’s opining about the differences between “girls” and “broads.”

J.R’s ineptness with the Girl contrasts with his blissful ease with his buddies. As is male adolescents’ tendency irrespective of time and place, J.R. and his crew channel their sexual frustrations into codependent companionship, blustery conquest badinage, and aggressive games and roughhousing. Ray Liotta and Joe Pesci’s vulgar front-seat exchanges in Goodfellas are presaged here in the midst of a petulant drive uptown with Joey (Lennard Kuras), during which J.R. whines that he’d rather go to Greenwich Village and punching bag Sally Gaga (Michael Scala) repeatedly demands the music be turned up. In a later bar scene, as J.R. attempts to recover from the “blow” of the rape revelation, Scorsese lingers on the crew’s fooling around (sticking straws in ears, tossing peanuts) at such length that it becomes almost horrific, their laughter maniacally exaggerated. But Scorsese doesn’t present all these hanging-out episodes for our derision or annoyance—he takes the silliness seriously as a necessary outlet; he knows such apparent cruelty disguises love and tenderness as much as it did for I vitelloni’s friends.

In this urban cocoon of male violence and pride, Bethune moves like a Swedish tourist or visiting alien, a more ethereal cousin to Cybill Shepherd’s Betsy in Taxi Driver. The actress is affecting as the character Scorsese didn’t bother to name. Her on-screen sweetness was no act—she devoted her life to assisting the disabled. (She died tragically in a 2012 hit-and-run as she was helping an injured animal off the road in Griffith Park.) When not serving as a placid soundboard for J.R.’s film musings, the Girl manages some independent wins, like when she coolly disillusions him in her apartment. Her insubstantiality is a natural result of Scorsese’s focus on J.R.’s perspective and of the same unworldliness and naïveté that help make the film vibrantly specific. Its greenness is so revealing and appealing that Knocking cannot merely be dismissed as a warm-up for Mean Streets. It’s now a road map for things to come, but if “Marty” had never become Scorsese, it’d still be some kind of New York classic, a vitalizing, cinematic gut punch.