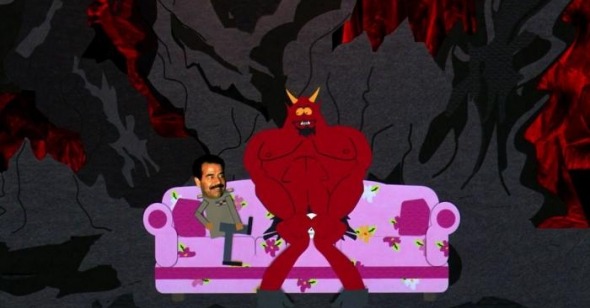 Oh My God! They Reinvented the Musical! You Bastards!
Suzanne Scott on South Park: Bigger, Longer, and Uncut

“Off to the movies we shall go, where we learn everything that we know, ‘cause the movies teach us what our parents don’t have time to say.”

I begin by quoting these lyrics from Monsieurs Stan, Kyle, Kenny, and Cartman to reinforce what most of us already know: cinema, now more than ever, is the preeminent form of collective cultural history. It tells us where we as a society have been, where we are, and ruminates on the potentialities of where we are going. Fittingly, the reflective nature of film also leaves its own mark on society, and the musical is one genre that is routinely trotted out by scholars as just such an example of the communal function of cinema.

Simply put, the Classical Hollywood Musical has come to be recollected and revered as a form of social prozac, born in the depression of the Thirties in an effort to prove a simple theory: throw enough sparkle in the spectators’ eyes, and they’ll forget that they’re waiting in line for bread. While this concept, the curative nature of the cinema, has been exaggerated over the years, the musical as a genre has remained locked in this perpetual state of pep. Musicals were bred to help us escape, to transplant us into a fictive land where singing in the rain didn’t necessarily mean that you were a crazy bum still strung out from your last fix. Ah, the good old days…

At the turn of the 21st century, however, the view on entertainment’s social functions has mutated into something like this: “Don’t blame me for my son Stan, he saw the darn cartoon and now he’s off to join the Klan.” Parental buck-passing? Cinema as congressional whipping boy? You betcha.

Enter, the first realist musical. And it’s animated. So much has been made of Trey Parker and Matt Stone’s penchant for pastiche in their 1999 film South Park: Bigger, Longer, and Uncut, it seems like a waste to rehash the duo’s painstaking patchwork of musical influences, save to note that the score is a loving homage to musical historiography, with one rather grandiose exception: these songs are actually about something more than love proclamations and excuses for putting the performers in outlandish getups. Far from removing the spectator from society, South Park brings society to the spectator, in all its twisted glory. As in every classic musical, our protagonists are boiled down to archetypes (although, the odds of finding the leading lady who breaks her ankle before opening night here are relatively slim): there’s Kyle the Jew, Kenny the Poor Kid, Cartman the Fattie, and Stan…well, Stan’s the Everykid, which is enough of an abnormality in this day and age even if part of his narrative arc is devoted to searching for the (elusive) clitoris.

Taking the down-with-Disney motif one step further, the plot focuses around an (self-reflexivity alert!) R-rated cartoon musical, from which our pint-sized protagonists acquire the foul language they spout henceforth. Indeed, the film functions on so many levels that it becomes easy to overlook its generic roots as little more than a series of tropes employed for an easy laugh at their overt familiarity. But it is the way in which musical iconography is employed and reinvented that is South Park’s true contribution to the genre writ large, and the aftereffects are already beginning to reap Oscars.

“Bombs are flying, people are dying, children are crying, politicians are lying too. Cancer is killing, Texaco’s spilling…the whole world’s gone to hell, but how are you?”

Irony is super, thanks for asking! It goes without saying that South Park is a phenomenon fueled almost entirely by a coy balance of subversion and candor, and nevermore has that meld been on more beautiful display than when its crude primary color cut-outs are set to music. When the lyrics are sunny (probably MVB, or Most Valuable Ballad, honors go to Satan himself, singing “Up There” from hell about the green grass of Earth with more longing than the chick with the fin could muster), the visuals are suitably perverse (Satan ends up aboard the H.M.S. Manhandler?) Vice versa, a swearing rehabilitation session, aesthetically all Busby Berkley choreography and Music Man shilling, casually reminds viewers that you don’t “have to live your life shootin’ up in the trash, homeless on the streets givin’ handjobs for cash.”

It makes one wonder what all of the Chicago hype-machine’s “cynicism is sexy again” fuss was all about; Parker and Stone were peddling a far more progressive version of it some three years prior. What’s that you say? Tabloid media has turned hard news into a twisted form of entertainment? South Park’s local news reporter is a midget in a bikini…sort of gives a new meaning to the term “razzle dazzle.” In a genre where sincerity traditionally reigns supreme, South Park and its more recent spawn (Moulin Rouge et. al.), all are forced to grapple with their audiences’ postmodern expectations, making singing to choreographed routines viable in this world “gone to hell” in which sincerity is tantamount to suicide.

And seemingly, so is everyone else. The most truly revolutionary aspect of South Park’s musical undertaking is its utter removal from a whitewashed, middle-class realm of coddling entertainment while maintaining a narrative firmly planted in a whitewashed, middle-class environment intent on doing precisely that. After all, Kyle’s Mom (the aforementioned bitch in question) starts WWIII over her desire to wash out the mouths of America’s children, all in a quest to return to a time when suburbia was deemed safe, when the precise issues the film is raising remained dormant under a veneer of false perfection. And what, if anything, is the musical if not a celebration of just such a veneer?

It’s also a matter of equal opportunity mocking. Case in point, the one person/class/gender/ethnicity/religion/profession/political affiliation/sexual preference/social institution/etc. that isn’t mercilessly satirized by Parker and Stone is the illustrious Brian Boitano, identity-free figure skater extraordinaire. The fact that someone so astonishingly bland could serve as an all-knowing deity to our young protagonists (albeit with a slight upgrade—as far as I can recall, Mr. Likes To Twirl never beat up Kubla Khan, nor do I bet along with the boys that he could “kick an ass or two”) is commentary enough on our social embrace of comfort and stability, progress be damned.

“It’s not my fault that I’m so evil, it’s society. Society. You see my parents were sometimes abusive and it made a prick of me!”

There’s something to be said for the image of Saddam Hussein breakdancing like a latter-day fascist Donald O’Connor. Not quite sure what that something is, really, but I can say this: Hussein’s presence (or, more fittingly, presentation) is innovative in that it fuses the film firmly to reality, while simultaneously dallying in the surreal (sad but true, there are no confirmed reports that Saddam’s evil ways are a side-effect of nymphomania, nor do we have any proof that Lucifer is his man-bitch or that his favorite phrase is “Hey, guy…”). Certainly, with our 20/20 hindsight, this plot device is slightly more squirm-inducing than it was back in 1999 (remember when Hussein was merely another punchline waiting for Hot Shots: Part Trois?), though the employment of Hussein as justified psychopath is something to explore. The overarching message of the film is, of course, that we need to cease relying on society as the scapegoat and take responsibility for our own actions. In this vein, is Saddam any worse than the parents of South Park that rally to blame Canada for the shortcomings of their children? America, through the eyes of Parker and Stone, is put on glaring display for its own hypocrisy when it comes to shifting blame and playing victim.

“I’m sorry, that movie has warped my fragile little mind…”

The lesser, if not more lasting commentary South Park provides is on the motion picture industry itself. In a move reminiscent of the classic “backstage” musicals, Parker and Stone not only lift up the curtain to allow the audience to see the guts of our beloved genre, they all but vivisect cinema. Targeting everything from the MPAA (“horrific deplorable violence is okay, so long as no one says any dirty words”) to our modern excuse of a star system (Question: would Canada really waste precious bombs on the Baldwin and Arquette clans?), to the sweeping and often neglected impact that the coming of sound had on film.

At first it seems a moot point of discussion, as the average American today has never seen a film made before 1975, let alone a silent one. But, at the risk of overstating South Park’s importance, the film’s subtext is rife with just such a commentary, albeit in the form of our own social prudishness over cussing. In essence, profanity here is serving the same function as the musical number once did in the early days of sound film—it’s jarring, borderline shocking. And, ultimately, with enough repetition, completely mundane.

Kyle, known for his sitcom-style closing platitudes divulging “what he’s learned today,” states at the conclusion of South Park: Bigger, Longer, and Uncut that the film itself is “about more than just fart jokes. It’s about freedom of speech and censorship and…stuff.” South Park, in addition to being one of the first musicals to directly confront “stuff” beyond the stylized conventions of the genre it co-opted, was the first to be critically lauded for legitimizing toilet humor in the name of social scrutiny and by extension reinvigorating a genre flailing in futility. Supa-sweet, indeed.