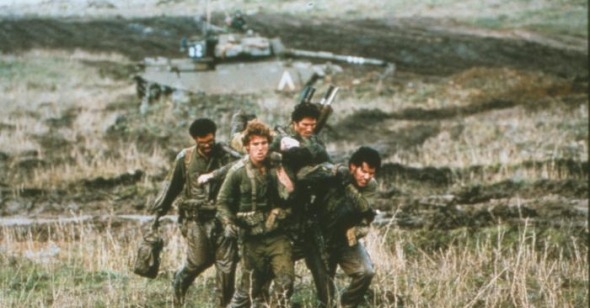 On October 6, 1973, Yom Kippur, the holiest day in the Jewish calendar, Egypt and Syria coordinated a surprise attack against Israel. At least nine Arab states, the equivalent of the total forces of NATO in Europe, were mobilized on the Israeli borders, and actively aided the Egyptian-Syrian war effort. On the Golan Heights, approximately 180 Israeli tanks faced an onslaught of 1,400 Syrian tanks, while along the Suez Canal, fewer than 500 Israeli defenders were attacked by 80,000 Egyptians. Caught by surprise, Israel suffered such severe losses in human life and equipment, that for the first few days of the attack the Zionist vision for this 25-year-old modern state seemed like an unrealistic dream. A near disaster, and maybe the Israeli military’s all-time greatest oversight, the Yom Kippur War has rooted itself as an inconsolable trauma in the collective Israeli consciousness, a wake-up call in the midst of the euphoric aftermath of the 1967 Six-Day War victory.

Amos Gitai’s Kippur (2000) remains cinema’s singular attempt to deal directly with this nightmarish point in Israeli history. It opens with a symmetrical and stable shot of an empty street in Tel Aviv, where we see Weinraub (Liron Levo) walking calmly in the quiet afternoon of Yom Kippur, 1973. As an Israeli viewer, I know this fragile serenity is merely the calm before the storm; a hideous siren will soon mark the beginning of the attacks and a moment of historical crisis. For now, soft tones of clarinet are heard from the soundtrack, and colorful paints are splashed on a white canvas. A man and a woman’s bodies (Weinraub and his girlfriend) are writhing in a smeared palette of artist’s paints. Slowly making love, they cover themselves with red, green, blue and white colors, as if integrating the Israeli and the Arab nations’ flags in an implied argument for peace. What can easily be read as a philosophical contemplation about the incongruousness between war and life, destructiveness and creativity, is perhaps more than just an obvious metaphor. It is, I believe, Gitai’s way of declaring right from the outset that his film belongs within the modernist tradition of the Sixties and Seventies, when Israeli cinema was facing a crisis in its inability to align itself completely with contemporaneous film movements. Gitai’s decision to turn to the abstract in a film which is mostly extremely realistic comes off as less a Terence Malick–like pontification than a statement about the difficulties in creating satisfying filmic representations of the Yom Kippur War, or of any other war. It is that moment of white before the first splash of color appears that becomes cinema’s irreducible zero point, the blank screen, and marks the artificiality of all images on it.

Kippur is not a typical Gitai film. Traditionally considered the cinematic “ambassador” of Israel’s history and conflicts—telling the stories of its patriarchal ultra-orthodox society in Kadosh (1999), or the first immigration before the creation of the state in Kedma (2002)—Gitai makes movies mostly for a non-Israeli audience. But since Kippur acknowledges that trying to recreate what happened that day is much too ambitious a task, it opens with almost no context, without trying to address any political questions. With no propagandistic axes to grind, Gitai sets out to convey what he experienced first-hand in that war as her served on an air-force rescue squad, and immediately throws us into the chaos. Weinraub rushes off to his car to pick up his pal Ruso (Tomer Ruso), and they both drive north to report to their unit. While Ruso is a highly motivated soldier excited about being part of a war which he feels can easily be won (the common Israeli hubris of the time), the complicated Weinraub is more distraught and skeptical. He preaches about anti-capitalism and Marcuse, even if Ruso is not really listening. “Forget Marcuse,” he dismisses Weinraub, “drive the car, there’s a war going on!” On their way to the Syrian border, their car gets stuck in a traffic jam. Gitai’s wonderful cinematographer, Renato Berta (who is responsible for the extraordinary camerawork in all of Gitai’s recent films), shoots their efforts to circumvent it in an extended traveling shot that immediately recalls Godard’s Weekend. And if indeed “A traveling shot is a moral statement,” as Godard once said, then Gitai’s use of the long take is not an unnecessary mannerism but a choice deeply wedded to his attitude toward his material. For him, telling a war story is not about creating heroic mythical characters or glorifying combat. The traffic jam scene is simply a prelude to the continuous confusion and fear captured throughout Kippur, where there is no triumph in war, only exhausting procedures accompanied by panic and horror.

The two soldiers eventually discover that their unit has already departed, and meet Dr. Klauzner (Uri Ran Klauzner), whose car has broken down. They take him back to his base, and in the midst of this mayhem join a helicopter unit responsible for rescuing wounded soldiers and shot-down pilots. In the scenes that follow, Gitai utilizes a handheld camera to create a gritty, visceral feel; it jitters and swirls, capturing the inexperienced military trying to rescue the wounded under fire. The film’s strongest scene choreographs the rescue of a wounded soldier in the Golan Hieghts as a piercing dance of despair that lasts eight painful minutes. The camera lingers on the soldiers as they keep tumbling back down from fatigue, dropping the wounded from the stretcher. The more they try, the more they cover themselves with mud and become an inextricable part of the horrific tableau—sullied like the sheets from the first scene in the film. In the battle scenes that follow, the perspective shifts from objective imagery to chaotic point-of-view shots, encouraging the viewer to accept what the soldiers perceive as truth.

This relentless attention given to the war’s sheer horror is the movie’s main merit, but therein lies its greatest shortcoming. Though uncompromising in its realism, Kippur is at the same time overly abstract. By providing us with almost no information about the war’s causes and depriving us of sufficient context, Gitai allows his film to represent all conflicts. As the fates of his characters are intertwined and all are victims, not heroes, the Yom Kippur War he depicts could be almost any other war today. The fact that Weinraub and Ruso joined an air force rescue unit and not, say, an armor unit, is more than just a biographical fact. It’s a moral decision that helps Gitai transcend conventions of the war genre. By not showing the enemy at all (the closest the movie comes to depicting the enemy is when Ruso mentions a newspaper photograph of a Syrian prisoner), he avoids representing it in a one-dimensional manner. Absence in Kippur also means acknowledgment.

One night, Weinraub wakes up Ruso to tell him about a nightmare he had, a helicopter crash in which he was burned alive. Anticipating what is about to happen next (the rescue team’s helicopter will be forced to make a crash landing), the dream doubles as a visual reflection of these real-life events, thus questioning the credibility of retelling them. Though Kippur was generated as a personal attempt to reconstruct the director’s own battlefield experiences, it is, at the same time, a continuous, barely conscious hallucination. Depicting war as hellish chaos without taking any overt political stance, Gitai not only makes a powerful argument for peace, he also stresses film’s affinity to irrational thought and dream. Questioning the medium’s ability to represent war in a non-arbitrary manner, Kippur seeks to celebrate the subjective truth and the ways it can be captured onscreen. Sometimes, it seems, even cinema falls short when it seeks to recreate a nightmare.