The Battle of Algiers 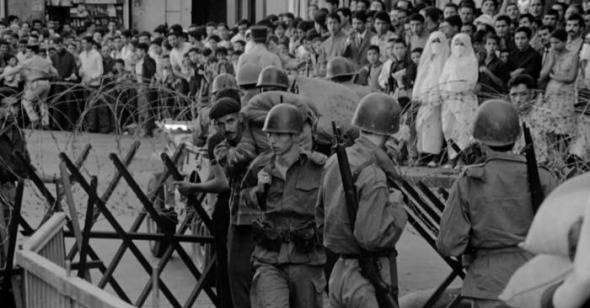 At Arm's Length
Saul Austerlitz on The Battle of Algiers

The history of the war movie is a history of clichés. The diverse yet cohesive unit, the valiant enemy, tough but warmhearted officers—these archetypes have moved beyond hoary to downright trite. Even the war films that do not make use of these stereotypes are, for the most part, possessed of an inherent conservatism. Between the violence and danger the films’ characters find themselves in, and the safety and restraint of the methods of filmmaking, lies the fundamental contradiction found in the great majority of war films. Gillo Pontecorvo’s The Battle of Algiers (1966) features none of these characteristics; it is that rarest of things, a truly dangerous war film. However, it is not the you-are-there danger of the Saving Private Ryan variety, although that is present as well; what still frightens about The Battle of Algiers (and makes it so astonishingly relevant today) is its penetrating insight into the psychology and sociology of battle. Most crucially, the type of war depicted in The Battle of Algiers is one that is nightmarishly familiar to our world circa 2003—the war of (and on) terrorism.

Just why is The Battle of Algiers dangerous? Danger is a word tossed around with impudence by detractors of certain disturbing films, but The Battle of Algiers is explosive for its didactic capabilities. Upon its release, the film was studied closely by the Black Panthers as a training manual for violent uprising against a colonial overlord. Similarly, the Israeli government banned the film until 1975 for fear that the nascent Palestine Liberation Organization would use it as an inspiration for attacks on Israelis. Pontecorvo’s Battle is a guidebook for how to build a secret organization (in this case the Algerian independence movement FLN) from the pyramid structure that allows the system to avoid collapse when any member is captured, to the most efficient means of striking at civilian targets. Pontecorvo greatly details the methods of indoctrination into these groups. In order for a new member to join, he is given a test. He is told of a certain individual, a time and place, and instructed to kill him. The instrument of death will be provided at the necessary moment. For this first run, the gun is not loaded, to ensure loyalty. The network implants a large number of sleeper agents, free of past suspicious activitiy, giving the authorities no reason to keep an eye on them until only after they’ve received their cue to strike. In addition to assassinations, the uprising is dependent on random (yet symbolically important) bombings of sites like airports, cafes, and discotheques. In order to carry the contraband through the checkpoints positioned throughout the city, the movement relies on women using powers of flirtation to smuggle bombs and weaponry into the European quarter of the city.

Sound familiar? Though reminiscent of current global terrorism, from the destruction of the World Trade Center, to bus bombings in Israel, to paramilitary suicide attacks during the war in Iraq, this is not a film to warm the heart of Donald Rumsfeld. The Battle of Algiers is profoundly sympathetic to the Algerian cause, and is structured to push its viewers toward empathy for the downtrodden victims of colonial oppression before the first act of violence is perpetrated. The film opens with a shivering, unshaven, miserable-looking Algerian man in French custody. He has just broken under the strain of torture, and revealed some crucial information—the whereabouts of Ali, the last of the FLN central command. Once Ali is captured, the French authorities believe, the back of the FLN will be broken. Adding indignity to physical injury, the captive is forced to dress in a French military uniform for the incipient raid, to avoid detection. The film’s title flashes onscreen over a shot of French soldiers swarming the impoverished quarter of Algiers, the Casbah. The soldiers surrounding Ali’s hiding place, Pontecorvo presents beatific close-ups of him and his associates. The image goes blurry, spinning us four years backward to 1954.

If the nature of a 20th century action-war film is to thrill audiences with heroic risk and the imminent fear of death, all within a framework of utter, unimpeachable safety, then The Battle of Algiers is not a war film. Its entirety exists to contradict the opening statement, that “Not one foot of documentary or newsreel film” was used in its construction. Deliberately, Pontecorvo makes it all look like on-the-fly newsreel footage, with his elaborate use of blurry images and out-of-focus shots. The overall effect is of a team of cameras deployed throughout the city, doing their best to capture an evolving, rapidly unfolding story. This is enhanced by the constant worry, ingeniously created by the film, that events are escalating into a violence uncontrollable even by the filmmakers. The Battle of Algiers violates its audience’s trust, overwhelming the supposedly omniscient, omnipotent forces of the filmmakers; its uncontained anger seems about to burst the boundaries of the screen, to fulfill the unspoken threat of scores of horror films by attacking the audience itself, safely complacent in its cocoon of spectatorship.

In a way, has the implicit nightmare come true? One now watches The Battle of Algiers, and it is hard to see as anything but a prophecy. Pontecorvo made his film in the light of the anti-colonialist backlash of the Sixties, and this ethos permeates every frame. The film strives to place the FLN’s violence in its appropriate context of French oppression, colonialism, and torture. However, approximately 18 months after the events of September 11, 2001, the film’s most disturbing and upsetting scenes now revolve around the three simultaneous bombings in Algiers’s European district. The FLN decides to bomb the Air France terminal, a café and discotheque in the heart of the city, each during its most crowded hour. The chief of the FLN brings the bombs, concealed in shopping bags, to three women, whose job it is to smuggle them out of the Casbah. In a shot that seems from the point of view of a surveillance camera, two of the three women are seen flirting with the soldiers in order to pass through a French checkpoint (a previous scene established that women were deemed off-limits for searches by the French). A rumbling, train-like noise growls throughout this scene and follows the first woman into the café. Her gaze travels around the crowded establishment, taking in the middle-aged gentleman sitting next to her, laughing teenagers, and a toddler licking an ice cream cone. Similarly, the second woman enters a discotheque, where she dances (poorly) to the Spanish pop song, and looks at the smiling, merry teenagers. The older third woman takes her package to the Air France terminal, and the same sequence of shots returns, sparking the realization that every person we have just been shown is about to be killed. While The Battle of Algiers is sympathetic to the FLN’s cause, Pontecorvo cannot help but show the humanity of some of the FLN’s victims, killed in the name of a future freedom.

Regardless of one’s political sympathies (and it would be difficult to watch without “rooting” for the Algerians), the nature of these scenes appears to have fundamentally shifted. When I first saw The Battle of Algiers more than five years ago, I found the bombing scenes disturbing, but kinetic, and well justified by the film’s escalating cycle of violence. The brutal torture sequences, depicting French soldiers burning Algerians with torches and electro-shocking their earlobes, and French Colonel Mathieu’s stray comment that he would use bombs if he were the leader of the FLN (reminiscent of former Israeli Prime Minister Ehud Barak’s comments during the 1999 election), balanced the two sides’ efforts, with the struggle for autonomy tipping my sympathies over to the Algerians. Upon returning to the film, I was haunted by the image, seen briefly only twice, of that soon-dead child and his ice cream cone. How could any cause, however right-minded and true, demand the death of this innocent in the name of future good? What amount of freedom from dread could be worth the death of a child? This unnamed child has been recast by recent global events as the star of The Battle of Algiers, and while the film is still a piercing study of uprising, and an indictment of the colonial system, the child lingers, and his memory aches.