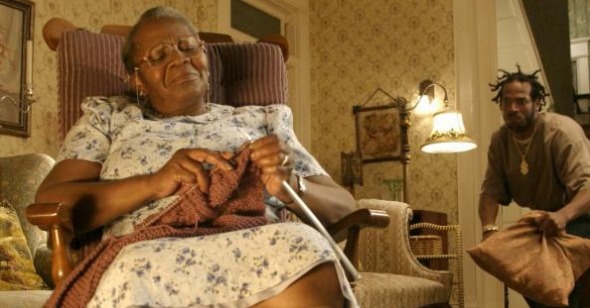 Bob and Weave
Michael Joshua Rowin on The Ladykillers

Irony, as we all learned from Reality Bites, is when “the actual meaning is the complete opposite from the literal meaning.” But what if the actual meaning isn’t so actual? What if instead it is frustratingly oblique, and not easily interpreted or understood? How, then, do we gauge the category, quality, and purpose of the intended irony?

For twenty-seven years Joel and Ethan Coen have posed this conundrum to mainstream audiences. For all the importance attached to their names and for all the plaudits and awards they continually receive, the question still remains like a nagging doubt: are they sincere, and are we supposed to take them seriously?

This question has been less troubling in recent years due to the enormous success of two of their more earnest efforts, No Country for Old Men and True Grit. But the befuddlement and discomfort that in many corners greeted Burn After Reading and A Serious Man—the more typically dark and strange Coen products sandwiched between them—suggests that the brothers’ challenge will not be taken off the table anytime soon. Their track record says as much: if Shakespeare had his “problem plays”—defined by their wild tonal shifts and ambiguous morals—the Coens have made a virtual career of such artistic grey areas, always delivering them with an irony simultaneously goofy and acidic.

Rated the lowest of all Coen films on Rotten Tomatoes, and generally spoken of with embarrassment by fans who see it as the nadir of their career, the 2004 version of The Ladykillers—a loose remake of the 1955 British comedy—makes the best case by which to come to terms with the siblings’ thick, often impenetrable, ironic humor. On the surface this would appear ridiculous. The Ladykillers is if anything immeasurably broad, its comedic highlights taking the form of Tom Hanks’s unctuous parody of a Southern dandy, a repeated irritable bowel syndrome gag, and the frequent sight of an elderly black widow chastising and walloping a quintet of hapless criminals.

But one major element stands conspicuously out. Basking in spiritual righteousness while divine intervention helps smite the bumbling thieves plotting to kill her, the abovementioned widow, one Marva Munson (Irma P. Hall), continually sings the praises of and eventually donates the gang’s stolen money to Bob Jones University. Bob Jones is, of course, the intensely Christian South Carolina institution with an infamous legacy of racial exclusion and segregation.

What makes this bit of irony so inimitably Coen in tone and perspective is that there is never so much as a wink at the audience to draw attention to it. Had you never heard of Bob Jones University and its ignoble history you could be forgiven for not picking up on the absurdity of Marva’s ostensible act of good will. In fact, if taken at face value The Ladykillers would warrant distinction as the Coens’ most morally simplistic film: the God-fearing, church-going Marva comes out on top over the duplicitous, pretentious G.H. Dorr (Hanks) and his assembled roster of violent and bickering cons. The film’s visual symbolism buttresses the battle: Dorr and Co. end up corpses on a garbage island, the final destination Marva’s preacher at one point compares to that of the Israelites who worshipped the golden calf. Marva, meanwhile, walks on sunshine as she vindicates the Lord. Her last scene transitions into a gospel rave-up of “Let the Light from the Lighthouse Shine On Me”: all is made right in the world, and no more need be said.

Yet there’s much more going on in the finer details of The Ladykillers, and these small but significant clues speak to a greater subtlety that illuminates the puzzling Bob Jones reference. Because why would the Coens make their outwardly beatific protagonist an ignoramus or hypocrite at heart? One reason might be that the Coens have something to say about race in The Ladykillers. Watching the film again for the first time in seven years, I was surprised to find it strewn with references to the civil rights movement, racial politics, and contemporary issues within African-American culture. The first scene after the opening credits, for instance, has Marva walk into her small Mississippi town’s police headquarters to complain about a neighbor’s blasting of “hippity-hop music.” She hates its crass lyrics, especially its use of the N-word, but her dislike of rap is about more than just personal taste. “2000 years after Jesus! 30 years after Martin Luther King! The age of Montel!” she exclaims with exasperation.

One product of the “age of Montel” that Marva bemoans is Gawain MacSam (Marlon Wayans), a lewd, gun-toting young African-American janitor—the inside man at the casino—who butts heads with another Dorr team member, arrogant and inept explosives expert Garth Pancake (J.K. Simmons). Garth attempts to bury the hatchet by telling Gawain of his experience as a Freedom Rider in the Civil Rights Era. Not only does Gawain not know who the Freedom Riders were, but he refuses Garth’s olive branch by claiming he doesn’t vote, and so the Freedom Riders’ work doesn’t matter anyway. There is significant irony in Gawain’s response. When fired from his job for sexually harassing a customer, Gawain initially plays the race card, threatening to sue his white boss for racial discrimination. On one hand Gawain doesn’t care a wit about African-American history and takes for granted his rights that were won after such a long and painful struggle; on the other he uses his African-American heritage only as means to deflect personal responsibility.

Gawain represents everything Marva decries about the current state of the African-American community, and fittingly knocks him around on a couple of occasions for spouting “hippity-hop language” and associating with a group of thieves. The two major black characters of The Ladykillers thus appear to stand on opposite sides of a moral and ethical divide. (They are even more closely connected by a flashback showing an elementary school-aged Gawain cowering before his short-tempered mother, of whom Marva reminds him). But how much better is Marva than Gawain, with her monthly contributions and enormous donation to Bob Jones?

In the end, it turns out, the Manichean battle between Dorr and Marva is a red herring; The Ladykillers offers no moral absolutes. If disrespect, violence, and self-hatred are plaguing African-American youth, the Coens are saying, an older generation is equally at fault for remaining ignorant, hypocritical, and self-righteous under the sway of an inoculating and simplistic Christianity. This may seem an odd conclusion to draw based on the film’s ostensibly sunny depiction of church life—in fact, it may seem odd to draw any serious conclusions about a film with characters named Gawain MacSam and Garth Pancake—but once again, the brothers drop clues. With fire-and-brimstone wrath, the preacher of Marva’s church takes great relish in denouncing the forces of modern corruption, just before leading his congregation in humble, loving praise of God—a clear Coen joke about the two-facedness of established religion. Marva’s own understanding of the spiritual life can be seen as blinkered, uninspired, or even degraded. She has little knowledge of the wider world beyond her devotion (she doesn’t know what PhDs or shofars are) and often indulges in vainglory: “As long as everybody knows,” is her final line of dialogue, expressing the earthly wish to be duly recognized for her beneficence. The donation to Bob Jones is the culmination of her spiritual blindness and hubris.

Why did the Coens make these ironies so difficult to tease out? Upon further review of The Ladykillers, I’m not so sure they did. Yes, the film’s ironies get overshadowed by caricature and slapstick, but I wonder whether viewers refused to see them because of what they “actually” meant—which basically amounts to the satiric insights of a couple of Jewish guys on the contradictions and straits of African-American life in the 21st century. This willful avoidance might also have had something to do with the nature of the irony itself. I remember seeing The Ladykillers in 2004 and being put off by the Bob Jones reference because I felt the Coens were acting like wise-asses, thumbing their noses at their audience by pulling the rug out from the moral underpinnings of the entire film. Considering the many reviews I’ve read of The Ladykillers that mention the Bob Jones joke as a typical Coen Brothers curveball and yet never follow up on its possible deeper implications, I suspect that many people felt and still feel the same way.

And this is why—more than its sophomoric humor, more than its superficially simplistic contest between good and evil, more than its having “butchered a classic”— The Ladykillers is considered the Coen Brothers’ worst film: because it is secretly one of their most challenging. It is a Trojan horse, bringing in provocative questions about race, religion, and cultural representation under the guise of a silly Looney Tunes homage. It is what the Coens do best. But lately, the more they play it straight the more they are revered. This is predictable given the unadventurous tastes of mainstream film audiences—True Grit did almost eight times the box office as the far superior A Serious Man—but it’s also disappointing since the less the Coens play it straight the more they are capable of creating a uniquely multilayered cinema: irreverent yet understated, dark yet whimsical, moral yet anarchic. And in the case of The Ladykillers, deceivingly insightful.