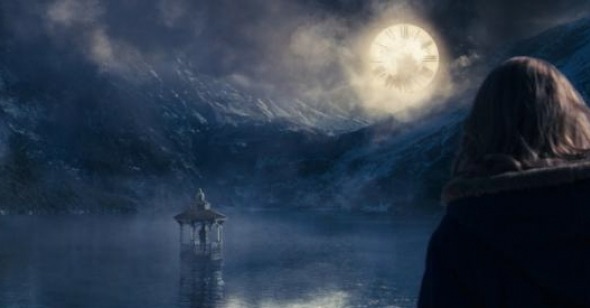 A Tools’ Errand
David Ehrlich on The Lovely Bones

Legend has it that the morning after he first saw the original King Kong, a young Peter Jackson bought a Super 8 camera, in front of which he could fidget his toy monsters. At this year’s San Diego Comic-Con, Jackson told Steven Spielberg and an audience of 6,500 dedicated fans that upon seeing Jurassic Park he immediately went out and bought a computer. It was Jackson’s first interaction with the sort of technology that would eventually compel him to adapt The Lovely Bones, a movie that so woefully misappropriates the cutting edge of digital wizardry that it’s likely to inspire young filmmakers to buy a lamp and learn shadow puppets.

Peter Jackson is certainly a gifted filmmaker of rare ambition, possessing a vision both extraordinary and generous. His unyielding belief in the gifts and potential which contemporary filmmakers are afforded by digital technology seems to confirm André Bazin’s declaration that “film is an idealistic phenomenon.” Bazin’s claim anticipated his theory that the cinema was pioneered by inventors rather than artists, men who saw the cinema as a potential means through which to capture reality as opposed to a tool for more fanciful expression. Jackson arrived on the scene some 40 years after Bazin’s death and has never assumed quite so technical an approach to his craft, but The Lovely Bones suggests that he unwittingly shares the quixotic zeal of those who first pioneered and misappropriated the medium. Yet for Jackson, reality is no longer the goal—not because he’s recognized the futility of trying to capture it, but rather because he’s convinced he should be aiming much higher.

Jackson’s phenomenal success with the Lord of the Rings trilogy and the extent to which he was able to imbue King Kong with a scope and physicality beyond the means of its previous incarnations seems to have convinced him that the cinema can now make visible anything he can imagine. This photo-real flicker of 1s and 0s seems to have become his guiding light. Since being endowed with the mega-budgets required to manifest the full sweep of his imagination, Jackson has approached every story as if encumbered by the burden of proof, a mentality where his imagination was so restlessly devoted to realizing itself that nothing was left to that of his audience. And yet somewhere along the way he seems to have become too enamored of the cinema’s imagined potential to properly exploit its readily available gifts. His approach has worked well for stories predicated upon their visuals, sagas that relied on plot and only flirted with abstraction, but when it came to adapting The Lovely Bones—a widely beloved Alice Sebold novel more interested in the geography of grief and healing than any mystical kingdoms, more rooted in the psyche than the imagination—Jackson’s insistently literal approach resulted in both the worst film of his career and a fundamental misuse of his beloved medium.

Perhaps the astonishing creative failure of The Lovely Bones is easier to understand and contextualize if you’re willing to consider Peter Jackson’s colossal King Kong remake less as a blockbuster than a $200 million self-portrait. While it may have been the beast from Skull Island in which a young Peter Jackson once saw his future, it was the indefatigable showman Carl Denham in whom Jackson might come to see himself. Ostensibly a loving tribute to the Merian C. Cooper film that first kindled his passion for the cinema, Jackson’s Kong devours the RKO classic, transmuting the monster movie into the appropriately inflated story of a man driven by a primitive urge to deliver new images to the bumbling masses. On Skull Island, Denham and his camera stumble upon the story of a lifetime, a place lost in time populated by creatures whose mere existence might shake the foundation of the civilized world. And yet, the footage of this incredible find only satisfies Dunham until he realizes that he can axe the film and instead present Kong—Skull Island’s most remarkable resident—directly to his audience. Denham forfeits artistry for brute force, and loses control of his spectacle as the beast rampages through the streets of New York.

Denham disastrously undervalues the power of imagination at the expense of what the eye can see—as a filmmaker he was merely a hunter, wrangling images only until he could find more dangerous game. He believed that the eye could compensate for the imagination rather than allow it to be freed, and Jackson in turn forgot that his protagonist was originally conceived as a warning to other filmmakers, and not a paragon of proper entertainment (to that end, Jack Black delivers Denham’s famous final remark that “‘Twas beauty killed the beast” as more of an epiphany than a eulogy). Having charted Skull Island and traversed the entirety of Middle Earth, Jackson must have felt at a loss as to what he might be able to create for his audience that they could never see for themselves. He was looking for a collectively imagined kingdom that he could visually chart and define, a place we all wanted to see, but could never reach by our own devices. He found it in heaven.

The Lovely Bones is the story of a teenage girl named Susie Salmon (“like the fish!”) who is murdered by a neighbor in an idyllic Pennsylvanian suburb circa 1973. The twist of Sebold’s novel is that it flips the script of mourning, allowing young Susie (Saoirse Ronan) to narrate the network of grief her death incites, observing from limbo how the world reassembles itself in her absence. Susie watches her parents struggle to unite a fractured family. She watches as the boy with whom she almost shared her first kiss finds new love. She watches as her mustache-twirling killer—Stanley Tucci as Mr. Harvey, a local man who’s only a smidgen more cartoonishly evil than Dr. Claw—eludes justice while leering at the Salmon household from behind his living-room window.

Jackson’s insistence upon seeing is evident almost immediately in his film version, as a brief prologue in which Susie’s Father (Mark Wahlberg) gives her a snow-globe (establishing and immediately belaboring the motif of deceptively idyllic traps eventually epitomized by Susie’s limbo) abruptly gives way to a vignette set thirteen years earlier in which Susie is conceived, as if her existence would be a mystery if we weren’t present to witness its genesis.

Following her death, Susie’s spirit is relegated to the “In Between,” a gorgeous, shifting realm that warps traditional concepts of beauty in the Robert Frost mold (verdant hills, periwinkle sunsets) to create an ostensibly perfect world of infinite geographical possibilities. Explored via a garish, shambling haze of lingering, self-infatuated imagery, the In Between is the afterlife as screensaver. Susie shares this endlessly malleable place with an insufferable young girl who calls herself Holly Golightly, and the two of them are delighted by the attractions of their private paradise. At the same time, Susie watches glimpses of the people she left behind, narrating her parents’ generically fracturing marriage, her younger sister’s first kiss, or—most frequently—the sinister Mr. Harvey licking his lips and practically begging the Scooby Gang to unmask him.

And yet, because Jackson is more invested in the act of seeing than he is in the various perspectives of his characters, the relationship between the two planes of being is obscured beyond all significance. We see them as Jackson does, so locked in his gaze that we’re denied a view as to how these two worlds reflect one another. He bleeds them together via real-world imagery colliding with its hyper-literal CG counterpart, as if aspiring to some sort of proto-dialectical montage. Susie, for example, eventually comes to recognize that a world can’t be perfect if you’re trapped inside of it. To be stuck in the In Between, unable to detach from the people she loved (and they her), is for Susie to exist as a ship in a glass bottle, an idea Jackson illustrates by showing the In Between overrun by, um, giant ships in glass bottles (meant to parallel Susie’s father destroying his collection of the crafts). Much of the film’s running time is devoted to this game of showing how the objects from Susie’s life take shape in her afterlife, but the syntheses of Jackson’s visuals are never greater than the sum of their parts—it’s just a series of matches. Rather than shine light upon his characters, Jackson’s imagery hammers them into nothingness.

Jackson’s prevailing impulse to show his audience every detail extends far beyond the realm of the In Between—even in the film’s earthbound portions, seeing is championed as the ultimate gift. The meticulously constructed dollhouse that Mr. Harvey maintains in his living room, its very existence sufficiently odious, is explored room by tiny room with fiber-optic cameras—if only Susie’s father and the detective with whom he attempted to solve her murder were graced with the same vision, the mystery would be as open and shut as it is for the viewer.

Stanley Tucci—so over the top he makes Nicolas Cage look like Olivier Gourmet—is never even given the opportunity to overcome the physical absurdity of his role, as Jackson buries the actor in an assortment of visual aids that range from a lentil-filled fat suit to a set of false teeth that altered Tucci’s jawline. Jackson is so reliant upon the eye of his viewer that he doesn’t trust them to intuit or feel. Susie will later comment from the In Between that her “murderer took comfort in the thought that people needed to move on,” a potentially interesting note regarding how evil is perpetuated by forgetting—yet every time we see Mr. Harvey he’s lurking in his parked car or behind a living-room window, a suburban monster in plain sight. Jackson is unable to step away from his beloved horror elements long enough to make anything in this film even remotely opaque; Mr. Harvey couldn’t be any more conspicuous if he moved into Susie’s abandoned bedroom.

The act of seeing isn’t only Susie’s means of connecting with the living but also the living’s means of connecting with her. An aspiring wildlife photographer, Susie leaves behind a box of undeveloped film that her father eventually finds and decides to develop at a rate of one per month, convinced that seeing the world through his daughter’s eyes is the best available means of keeping her close. It’s a critical element that Jackson imports from Sebold’s novel, but introduces in his film only to drive a wedge between Susie’s grieving parents. Her photos are shown to us for a flash, but we spend a lot of time watching Susie frolic through wheat fields in the In Between, hushed voiceover guiding us through her every thought.

And yet, despite Jackson’s unyielding refusal to leave anything to the imagination (including Mr. Harvey’s perfectly phony swan dive demise), the film’s most pivotal moment—Susie’s murder—is omitted entirely. Moreover, the adaptation refuses to acknowledge Susie’s rape, which Sebold authored both as a way of illustrating the ugliness of the world from which her heroine is spirited away, and also as an emphatically cathartic nod to her own tragic experience as a child. Instead, Jackson offers Susie’s recently disembodied spirit sprinting through the streets near her home in slow motion. This is a story in which the killer should be the least important character, and yet only during his defining act is Jackson capable of leaving him alone. Omitting certain details might be a matter of decency or the result of commercial interests, but it plays as if Jackson—much like Carl Denham—doesn’t care that the star of his show is dead so much as he delights in the spectacle he can wrest from it.