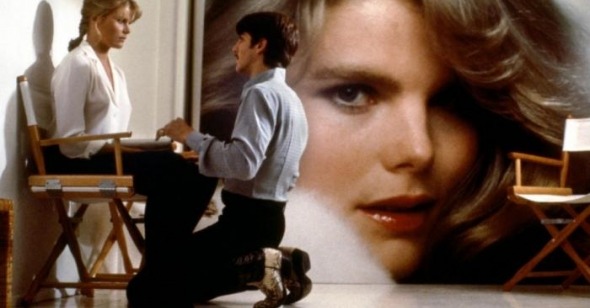 In Sweet Charity and Cabaret, Bob Fosse’s heroines live to fight—and sing—another day: to live, in the words of Shirley MacLaine’s indomitable taxi dancer, “hopefully ever after.” In 1983’s Star 80, Dorothy Stratten (Mariel Hemingway) exits this world naked and face down in a pool of her own blood, killed by her estranged husband, Paul Snider (Eric Roberts), in the midst of their latest attempted reconciliation. The last moments of Fosse’s last film (he died in 1987) feel like a logical endpoint in the career of an artist who regarded show business with a wary eye; after a bloody, distanced tableaux of two people destroyed by their starry-eyed aspirations, was there really anything left to say?

The brutality of the film’s conclusion is not strictly an artistic choice, of course. Star 80 is famously based on a true story—more specially, on Teresa Carpenter's award-winning Village Voice article “Death of a Playmate,” which fleshed out a story made familiar by the headlines: nightclub promoter kills his famous, Hugh Hefner-approved girlfriend—and then himself—in a fit of sick, desperate jealousy. Parker’s piece sketched portraits of Snider as a hustling sociopath and Stratten as a nice, naive Canadian girl who became a victim of both her own nascent celebrity and her apparently bottomless capacity for forgiveness.

This material had already been covered in the 1981 TV movie Death of a Centerfold when Fosse got to it; Star 80 was intended not as a pile-on but as a more artistic treatment that would get beyond the facts and into the psychology of the participants. This was Fosse’s first mistake—not the approach, but the idea that he was the man for the job. His legacy will be as the man who dragged Broadway choreography high kicking and screaming into the late twentieth century, replacing the coy, suggestive movements of “classic” stage musicals with a kind of proto bump and grind. This gleefully sleazy attitude was not without ambivalence, which is maybe why he made Lenny (a movie about an artist who did what he wanted without fear of reprisal and didn’t live to enjoy it) and definitely why he made All That Jazz (an autobiographical exercise that saw Fellini’s 8 1/2 and raised it several grueling open-heart surgery scenes).

All That Jazz is laced with disgust—for filmmaking, for show business, the whole rotten, decadent thing, but it’s also suffused with joy. Its tacky excesses—like Jessica Lange as a beatific Angel of Death figure—feel like an outgrowth of an artist’s actual sensibility. All That Jazz reaches out; Star 80 is cut off from the things that made him a preternaturally assured director despite his lack of formal training (remember that he beat Francis Ford Coppola for the best director Academy Award the year of The Godfather). Fosse’s exuberance, his sense of showmanship, his love of performers—these things aren’t absent in Star 80, but they’re inverted so that strengths become weaknesses. The film is desultory, employing aggressive editing not for exhilaration but in the service of sensory assault. It entraps its actors rather than letting them achieve liftoff. Cabaret and All That Jazz have urgency; Star 80 feels like a movie Fosse stopped wanting to make almost immediately after he rolled camera.

Me, I wanted to stop watching the film (both times I’ve seen it) during the opening sequence—not because Fosse’s staccato juxtapositions of Stratton’s Playboy spreads (painstakingly recreated with Hemingway) and Snider’s sweaty, blood-smeared post-murder rage are disturbing, but rather because they’re so obvious: eros and thanatos, laid out for your consideration. Starting at the end may be an attempt to defuse the material’s TV-movie-of-the-week potential—to show that he’s not just making Death of a Centerfold—but it’s actually much more prurient this way. By coyly skirting around the actual money shots and then cutting back to the beginning of the story, Fosse predicates his film on a sense of anticipatory dread. The result is that the characters become little more than doomed symbols.

Which is exactly how he uses them. Very lazily in the case of Hemingway’s Stratton, who is never allowed even permitted a sly or savvy look—she’s a sacrificial lamb, and Hemingway’s suppression of her natural intelligence as an actress is yet another of the film’s self-defeating elements. Fosse is more aggressive in the way he deploys Eric Roberts—too aggressive, actually. Roberts’s would-be Brandoisms got a lot of praise when the film came out (he was the only thing most people liked), but this isn’t true Method madness, just a junkshop collection of physical effects: flashing eyes, oily hair, dirty mustachio, that coiled, powerful torso. Instead of letting Snider’s dangerous self-delusion emerge through his interactions with other people, Fosse zeroes in on it in isolation—we see him working out to the point of exhaustion in his cluttered Vancouver apartment, pulling faces in the mirror and basically acting like a guy who never got over Taxi Driver. Or maybe that was Fosse. Either way, he’s such a pent-up cartoon that we can't understand what Stratton sees in him, and even if that inexplicable attraction is the film’s subject—as well as a very observable real-world phenomenon—it’s not dramatically compelling. Sitting there with foreknowledge of the real-life story and cued by the “arresting” opening, we’re just waiting for things to go south, which they do in upsetting, methodical fashion, exacerbated by the faux-documentary interviews with some of the peripheral characters, which imply that maybe Fosse double-billed Taxi Driver with Reds.

It’s not the grimness that does the film in, but the paucity of insight: everything is completely on the nose. When Stratton calls Snider from the Playboy Mansion to talk about how elegant and refined it is, he’s hunkered down in one of his strip clubs, and the gyrating onstage action fills in the oblivious gaps in her account. Paul Verhoeven got further inside his (ridiculous) characters’ (ridiculous) desires in Showgirls, which was simultaneously satirical and dead-serious in examining objectification of women and the commoditization of sexuality. (If ever a film understood that life is a cabaret, old chum, it’s that one). In Star 80, though, there’s a strident, chiding attitude, as if the master choreographer behind The Pajama Game’s “Steam Heat” and Cabaret’s “Two Ladies” was now completely repelled by tawdriness—a revulsion that swallowed up not only his gift for sensual spectacle but also his entire creative identity. Star 80 is an artist’s attempt at self-negation.