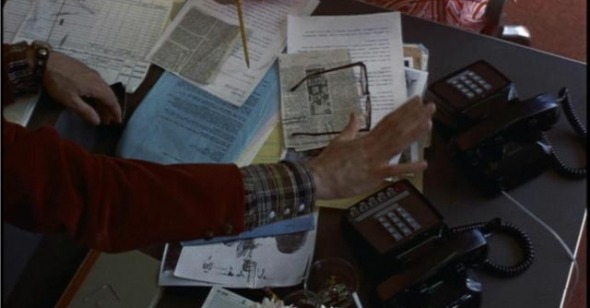 All This Stuff
Brad Westcott on Taxi Driver

All my life needed was a sense of someplace to go. I don’t believe that one should devote his life to morbid self-attention. I believe that someone should become a person like other people.

I first saw her at Palantine Campaign Headquarters at 63rd and Broadway. She was searing a white dress. She appeared like an angel. Out of this filthy mass, she is alone. They…cannot…touch…her…

Travis Bickle has found his purpose in life. Smitten, for a while he can only watch from afar. Having parked his yellow checkered cab outside the Palantine Campaign headquarters, he peers through the dank Manhattan drizzle and the reflective barrier of two glass office-doors, fixated on said purpose. Betsy.

Inside, inane office flirtation is halted by this outward sense of purpose.

That taxi driver’s been staring at us.

Sometime later (how long, a week?), Travis takes the next step. Wearing a silly maroon corduroy sports coat, he strides single-mindedly through the office doors on 63rd and Broadway, bee-lining it for Betsy. Betsy is seated, seemingly pinned behind her desk by Travis, yet her expression and body language register more amusement and interest than discomfort. Travis wants to volunteer, he says, but it’s clear he doesn’t. They both know his true interest is Betsy, and before long the pretense falls by the wayside.

Would you like to come have some coffee and pie with me?

As Travis speaks the preceding words, they’re accompanied by a single shot in Martin Scorsese’s landmark 1976 film, Taxi Driver, which never fails to render me awestruck. From a high angle framing Betsy’s desk, the camera drifts slowly to the right, following Travis’s arm as it makes a somewhat baroque sweeping gesture across the desktop. At the end of the flourish, Travis’s hand is outstretched, fingers splayed, as if for a moment possessing and controlling “All this stuff” in Betsy’s life.

To the viewer, the sense that this shot might be anything out of the ordinary is barely evident, almost a nagging afterthought. The shot is just long enough to allow us at some point to register that it is in fact slightly “over-cranked” (shot in slo-mo)—arguably it’s Betsy’s fingers, lethargically drumming her pencil on the desk, which provide the clearest indication of time wound down—yet short enough to let us return easily to the normal pace of the scene without skipping a beat.

Of all the individual shots one might single out as worthy of mention in Taxi Driver, this is certainly not among the most celebrated. What about the famous overhead ceiling shot surveying the carnage of the climactic bloodbath? Or that strangely “unmotivated” camera move tracking off of Travis to look down the hallway as he pleads with Betsy from a payphone? These shots, apart from having by now been discussed thoroughly elsewhere, are indeed moments one might leave a viewing of Taxi Driver consciously pondering. It’s the both the seeming insignificance of our shot and the complexity of what it suggests in its scant three seconds which I find so impressive upon returning to the film again and again.

To get at what makes this shot so curious, it’s almost easier to talk about what it isn’t than what it is. The camera is relatively high off of Travis’s right shoulder as his arm sweeps across Betsy’s desk. Yet we are not quite in a bird’s eye position, looking straight down, as is often used to show a “detail” or “insert” shot—as used to show Travis, alone in his apartment, meticulously laying out the tools with which he constructs one of his lethal devices, or the quick smack of cold steel pistol on the diner counter-top between Pumpkin and Honey Bunny in Pulp Fiction, or any of Wes Anderson’s inserts marking his characters’ incessant love of things and the precision of their arrangement. Our shot is not quite the same as these, yet somehow of a piece, a slight aside conveying detail, and in the process just subtly suggesting an authorial presence.

Yet whose vantage point is this exactly? Scorsese’s? Travis’s? We are certainly not seeing literally from Travis’s point of view, as we are clearly positioned just behind him. Scorsese, the ‘author,’ has little reason from a narrative perspective to focus our attention so intensely on such a throwaway gesture. The surreality of the shot, expressed primarily through it’s slower speed and the oddly flamboyant arm gesture, tips us off somehow that we are sharing some part of Travis’s consciousness. Scorsese’s choice to eschew the classical POV shot here, while still attempting to represent Travis’s perceptions, produces a momentary disruption in how we are used to processing classical film grammar—a blurring of the line between authorial vision and character subjectivity he would continue to toy with by allowing both Henry Hill (Goodfellas) and Ace Rothstein (Casino) to walk into their own POV shots.

The resolution to the ‘problem’ of this shot—to the extent that such exists or that we need a resolution at all—is for me the suggestion that we are seeing Travis see himself. This moment for him is both the kind he’s dreamed about beforehand and the kind he will relive afterward. Confronting the object of his affection, he’s offering himself up, magnanimously, as Betsy’s savior: her escape route away from “all this stuff” which seems to have imprisoned her, but which Travis is able to dismiss as mere trivia with one grandiose sweep of his arm. He sees his shining moment unfold as if in a dream, as if for those scant seconds he had in fact died and gone to heaven, viewing himself during his ascent as in those out of body experience stories.

Our shot is subtly audacious—a contradiction in terms befitting a film so dependent upon the concept of contradiction itself. At every turn Taxi Driver seems to ask us to reconcile the seemingly irreconcilable, to square the appeal of DeNiro’s undeniable charisma with the actions of a sociopath. Robert Kolker has likened Travis to the terrifying offspring of Ethan Edwards and Norman Bates—a figure still tragically encoded with the mythos of moral certainty and decisive action, flailing impotently in a modern world as fractured as the masculine identity, as compromised and gone-to-seed as the Manhattan of the Seventies. Robin Wood goes so far as to see both The Searchers and Taxi Driver as unsuccessful, though interesting—“incoherent texts” unable to choose a side among their competing contradictory impulses.

For me, it’s these fractures and paradoxes themselves which make Taxi Driver both wondrously unfulfilling and infinitely watchable. We aren’t supposed to be able to reconcile Travis Bickle. Like the Cahiers group’s famous critique of Ford’s Young Mr. Lincoln, Travis Bickle is an impossibility, a Frankenstein’s monster bearing the cracks and fissures of too many incompatible demands. As such he’s an exceedingly modernist creation, as much an icon for post-industrial angst as Edvard Munch’s figure on the bridge.

It’s currently fashionable in art cinema to view your characters exclusively from without. In the work of the Dardenne brothers, the camera watches just ahead or behind the protagonists, trained on their every reaction, always more interested in what they register than what they see. Like a behavioral study, we spend time with them as opposed to braving a glimpse into their subjectivity. Philosophically this tact seems to compliment a very post-modern suspicion, suggesting the futility of representation itself. Though this trend has revealed a seemingly new set of dynamics, and certainly invigorated world cinema as of late, in some respects it is simply a return to cinema verité.

In this light there’s something refreshing in returning to Scorsese’s oeuvre. Scorsese’s camera will incessantly probe, track, pan, and drift in an unabashed quest to replicate and share with us what his characters feel. Yet it’s the fact that he utilizes expressionism of this order as one tool among many which keeps his films so inviting and invigorating through the years. Again, it seems to be the conflict of contradictions in which he’s interested; like his beloved French New Wave, Scorsese is a self-taught student of the totality of cinematic style. Fascinated by the stew resultant from combining the gritty naturalism of Travis’s milieu with a very Hitchcockian strategy of subjectivity, he is not afraid to force these apparent contradictions to find reconciliation in the minds of his audience, and his work has aged all the better for it.