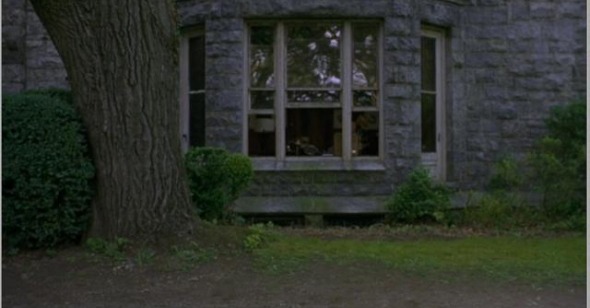 In 1998, Gus Van Sant made what is still (more or less) universally regarded as a misstep, the (more or less) shot-for-shot remake of Hitchcock’s Psycho. It was, however, a necessary step, an expiatory act which, genuflecting before the sanctity of the shot, shredded the director’s on-high communion with the film. It’s this disavowal of authorship, this minimizing of originality’s worth, which must be acknowledged if one is to accept certain elements of Van Sant’s subsequent “Death Trilogy”: wholesale transplantation of sequence-shots from Béla Tarr’s oeuvre into Gerry; re-appropriation of Alan Clarke’s title, subject matter, and stylistic treatment in Elephant; and re-creation of iconic Kurt Cobain photographs in Last Days.

Seen in a pessimistic light, this non-proprietary attitude is cold, sharklike postmodernism, treating all of cinema as an assortment of shots, each one a potential sample for reuse. Or viewed with a bit of optimism, it could represent an affirmation of the world in front of the camera, a faith that the uniqueness of the captured event will create a new piece of cinema. This shot is a new shot simply because this man has never before walked down this road. And so on. In either case, whether the director lays claim or not, it’s an idea that leads naturally to treating the crystalline purity of the shot as paramount.

In Last Days, a not-really-veiled fictional account of Kurt Cobain’s end times in an ailing country castle, Van Sant’s implicit concerns with creative ownership and the figure of the artist are finally met explicitly by the film’s subject: visionary, hermetic, drug-numbed alternative musician Blake (Michael Pitt). At the center of the film (literally, straddling the 48-minute mark in a 96-minute movie) is a five-minute shot, perfectly self-contained and perfectly simple: Blake makes music alone in his room.

It begins as an arpeggio, three or four notes of a power chord spaced out raggedly over a couple of seconds. An inarticulate piece of sound, it has no internal rhythm until, thanks to the technological intervention of a loop pedal, it begins repeating. Pattern is imposed on seeming chaos by virtue of simply framing it—selecting a parcel of time and repeating it—and Blake moves on to the next pattern. This too is parceled and repeated (much as the framing of an event makes it into a shot; riffs and shots are both segment-elements to be fetishized). We’re observing the creation of riffs sui generis, and as they pile up, creating a tonal and rhythmic context for one another, the intensity and effect increases exponentially. We view all this, it bears mentioning, from outside…

But we will leave this man alone in his room for a while longer, because this shot of musical activity, the window frame within the film frame placing it at a further level of remove, recalls an earlier one: a long-held static shot of a TV playing the music video for Boyz II Men’s “On Bended Knee.” Watching the video almost in its entirety, framed by the TV screen, makes you yearn for the real emotion of yearning to which its sounds and images can only insipidly allude. “Can somebody tell me how to get things back the way they used to be?”: in the context of Last Days this is not a reference to lovelorn heartbreak but a lament for images and sounds having lost their way, for creativity having been divorced from meaning.

Last Days pays very little lip service to romantic heartbreak, but it does contain a litany of allusions to the problem of replicas replacing originals, of roots being severed: an American impostor impersonating Chinese magician Chung Wing Su; a replica of Stonehenge built by an American for a Romanian Princess; the London Bridge brought West by an oil tycoon; and most categorically, a pair of religious canvassers asserts that humanity, having lost purity, can no longer talk to God. The implied stance is that a sense of sublimity or transcendence in artworks is worn away as history progresses, as the maze of references and appropriations becomes longer and more complex. Even the phrase “On Bended Knee” has a lineage; Last Days uses a “Venus In Furs” sing-along to trace it back a small way, as far as the Velvet Underground (“down on your bended knee / taste the whip of love not given lightly”)… but its original meaning, the way things used to be, is now lost, though some remnant may remain in the altar-like podium on which the TV rests. It’s now only a phrase to be repeated or sampled variously in an attempt to evoke something, anything, in the service of S&M or R&B.

If Last Days is a vision of a collective creative cul-de-sac, the music-room shot of Blake’s guitar-loop creative outpouring is the terminus—to appropriate a phrase from David Foster Wallace, “some kind of line’s end’s end.” Even Boyz II Men had modulations, climactic key shifts reaching ever upward, changing the melody. Blake in his room has only accumulation, no history or context, and he can’t change the key because it’s locked in. His improvisation is riveting because it’s nothing but present tense, a series of hermetically and emotionally “pure” (though technically sloppy) nows layered on each other to the point of eventual overload. The pattern does not hold, and Blake’s shift to the drum kit, a futilely aggressive attempt to restore order, is soon abandoned for destruction. This offers a new perspective on old-fashioned guitar smashing: not youthful exuberance but desperation at having locked oneself alone in a room with one’s own looping noise.

The music room houses the collision of two visions of creativity: the fetishizing of the present-tense unit (shot or riff) above originality or ownership and the Romantic Artist as Godhead. And the latter is still going, under its own considerable momentum, but so much so that it’s rushed past the end of the line. It’s easy, of course, to construct a fiction of lost people and surround them with a labyrinth of contemporary culture, like placing the gun in a corpse’s hand. It’s at least as easy to read movies in this way, and I don’t want to do that, because I don’t think Van Sant has taken this easy way out (though his seeming nostalgia for some transcendent “way things used to be” comes close).

The music room shot in particular is something quite else—and if I have not said much about the shot’s contribution to this meaning (indeed, I haven’t even yet mentioned that it’s a reverse tracking shot, starting close to the window and pulling slowly away from the house), it’s because the mechanics of the shot, meticulous and gorgeous in time and space though they are, have less to contribute than does the fact of the shot. The shot is not about camera movement or light, really, but about clear-eyed capturing of the event before it—or at least the completely believable illusion of such, which in film is as close as we can come. The event is (or at least was) real, and any response we have to it is a real response to a real thing.

Of mechanics, however, this much can be said: as Blake pulls the plug, the camera comes to rest (sealing the shot as a parcel, a self-contained unit) farther from the music room than it began, seeing more outside the room than in. It includes in its purview a wider scope than Blake himself can encompass, and we can see that he’s just a guy with oppressively amazing noise in a room that has a whole other world around the outside of it.