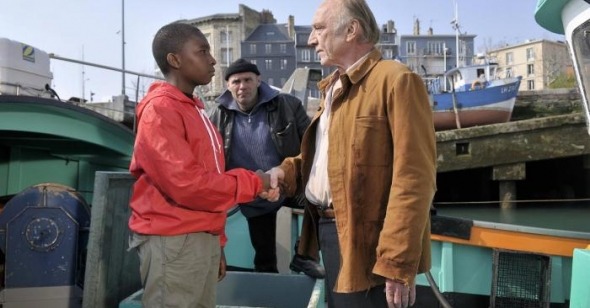 “The color film can be a great aesthetic experience—when it has been freed from the embrace of naturalism. Only then will the colors have the chance of expressing the inexpressible, i.e., of expressing that which can only be perceived.”—Carl Dreyer, Film in Review, 1955

“The continued commercial dominance of color is an asphyxiation of the intimacy of black and white cinema.” —Satyajit Ray, interviewed by Harry M Geduld, 1956

The opening sequence of Aki Kaurismäki's Le Havre, set in a railway station, presents each of its characters in turn (two key protagonists and two walk-ons), standing in front of circus posters. Because this motif is never used or referred to again in the film, one might be tempted to ascribe it to a typical Kaurismäkian indulgence, an oddity, a piece of coloring (to use that phrase in a metaphorical and dismissive sense). Yet it not only evokes with a striking economy and immediacy a sense of time (the past—for Le Havre is a film set in the present, but decorated and performed as if in the past) and place (what the French call la province, i.e. not Paris) but also quite aptly describes the tonal register of the film: simple, unfashionable entertainment, with a palpable sadness behind the grease-painted smile.

Le Havre may well be, like the majority of film-nut Kaurismäki's work, a comically deadpan treatment of a particular type of cinema (having previously essayed road movies, rockumentaries, and film noir, this time he takes on the golden age of French cinema), but there is nothing glib or flippant about his formal decision-making. This is particularly the case in Le Havre when it comes to color. The protagonist, Marcel, played by André Wilms, is framed in the center of the first shot, wearing a camel-colored suede jacket, a working man’s item—in this case, the uniform of a shoe-shine man. This coat, which as the night draws in takes on a burnished quality like wet sand at sunset, is but the most resonant and satisfyingly symbolic shade in a film whose color compositions are, from beginning to end, consistently disarming.

Le Havre, a giant fishing hub on the north coast of France, separated from England by the Channel, is presented as a town of dark, unforgiving blues—cold sea, wet streets, vast shipping containers, intimidating border police uniforms. On this bleak, mottled canvas Kaurismäki and his production designer Wouter Zoon place tiny, brightly lit, and brilliant reds (an onion, a blood-red carnation, a thickly lacquered stripe on the side of a bus, a copy of the Code Civil, the leather jacket of the remarkable rocker—and real life Le Havre native—‘Little Bob’) and conspicuous yellows (an ashtray, a piece of camembert, a street-cleaner's hi-viz tabard, and Marcel’s wife’s favorite dress, whose yellow carries an emotional weight of its own). In so doing, they paint life onto this forbidding terrain. These little beacons of color shine out of the bleakness in the same way as the characters in Le Havre, seemingly inhabiting an idealized past, stand out from the reality of modern France, which is briefly glimpsed on a snatch of real TV news footage Kaurismäki allows himself. This is now a country in which seekers of asylum are “a problem” to be dealt with by incarceration or repatriation, when for many decades rich countries like France wore their proud record on immigration and asylum as a badge of honor, not just a postcolonial yoke. The film dramatizes a collective attempt to peaceably push this reality back, and does so by pitting a deliberately romanticized community of characters against it.

Marcel’s home is a perfect replica of a 1960s ground floor flat, right down to the period box of “Paic” washing-up liquid. Though spartan, the bare interior walls are of a richer, more decorative dark blue than the world outside (words like nickel and cobalt might come to mind were this an exercise in branding house paints), but the polished green of their Formica table and a small, solitary but perfectly vased bouquet—a tiny burst of color and light—showcase the pride that Marcel’s wife Arletty takes in decorating their frugal lives.

The camel-colored coat Marcel wears is also the color of his wooden shine-box, and of his dog, Laika. Though simple and damaged, and worn over tattered trousers and boots, it nevertheless makes him look striking; it gives him dignity and even a certain style. The opening reel of the film will show him humiliated, treated like a tramp, told to move along by police, even called a terrorist by a shoe-store owner, yet he returns to Arletty at the end of the day with head high and a twinkling eye, bearing money and bread. Marcel’s coat is, incidentally, also the color of his freshly cooked baguette’s golden crust. (Even the humble baguette, symbol of French quotidian life, is associated with the past—the barkeeper Claire admonishes her daughter Yvette, “Fancy opening a boulangerie in these times.”)

About a third of the way through Le Havre, after delivering Arletty to hospital, Marcel stops by the dock and lights up a cigarette as the evening sun briefly settles on his jacket, reddening its complexion. Already a symbol of his nobility and style, this brief evocation of a lonesome cowboy in the Arizona desert suddenly gives Marcel the air of a traditional western movie hero in a brown suede coat—perhaps Alan Ladd in Shane or John Wayne in The Alamo. He has become the brave adventurer who will risk everything he has for a young Ghanaian boy he has only just met. From this point forward, the camel coat itself has taken on another dimension. Marcel refuses to distance himself from injustice and mobilizes his friends to help his cause, even at the expense of leaving his wife (whom he reveres) in the cancer ward unattended. In one sense, Marcel (in his embodiment of a leftist, communitarian response—his surname is Marx, after all) may be more Gary Cooper than John Wayne, but it is still fitting that an act of this kind be associated with a pointedly artificial, movie-star heroism. Kaurismäki’s notorious taste for pastiche is softened here into a more refined symbolism, in the service of a profound and moving story.

He may have named his production company after Godard’s Alphaville, but Kaurismäki’s film could not be a clearer homage to the type of filmmaking that many feel the New Wave unjustly threw out with the bathwater. In this regard, Le Havre contains subversively skewed casting (New Wave poster boy Jean-Pierre Léaud is the villain; Pierre Étaix, Tati-acolyte and silent master, is the good doctor), yet the film remains a passionate and universal story of solidarity, in a world where solidarity is in very short supply. When Marcel lies to the police, he does so explaining, quietly but insolently: “I am doing my duty—I love society.”

After years of delighting (or not) in his kookiness, it might be time to recognise Kaurismäki for the exceptional classical filmmaker that he is. His approach to color in Le Havre—not just in the composition but also in the deep symbolism and evocation of each detail—corresponds rather satisfyingly (rebelliously, even) to Carl Dreyer’s theory of color filmmaking, expounded in 1955 in the magazine Film in Review, which seems never to have gained any real traction. For Dreyer, writing as an artist of monochrome, oblivious to the technological advances that would eventually permit the creation of a color film as intimate, liberated, and naturalistic as, say, The Tree of Life, the advent of color cinema had been an artistic catastrophe, though not irretrievable. He felt that the secret to artistic success in the new medium was to use the smallest possible number of colors, and to use them in conjunction with black and white: “Black and white are too little used in color films, they have been forgotten in the childish rapture over the many bright colors in the paint box.” By choosing as an aesthetic jump-off point the intimate humanist black-and-white cinema of a Pagnol or a Carné (hence the use of the names “Marcel” and “Arletty”) Kaurismäki has achieved almost exactly what Dreyer prescribed—only substituting dark blue for black. And by using colors so boldly and figuratively to represent life, he shines a warm spotlight on his beloved characters and illuminates their cause.