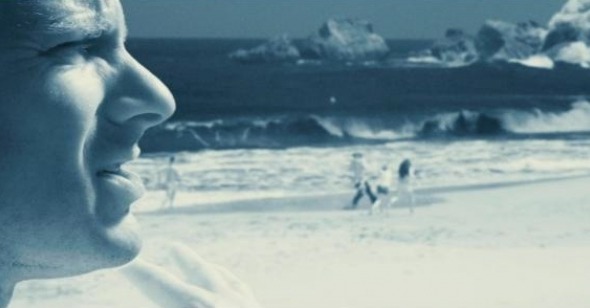 A Touch of Gray
Adam Nayman on A Perfect Getaway

The cinematography in David Twohy’s 2009 A Perfect Getaway is utterly lush until suddenly it isn’t. The match cut that marks this shift—when Mark Plummer’s complex color palette is suddenly desaturated—denotes a significant moment of formal and narrative rupture. It’s the moment that this fleet and remarkably agile thriller stops on a dime. Since the statute of limitations on spoiler alerts for films that nobody saw is two-and-a-half years, it’s okay to reveal the nature of the switcheroo: that Hawaiian-honeymooners Cliff (Steve Zahn) and Cydney (Milla Jovovich) are not meek city mice dodging a serial killer but wandering mad dog murderers in mid-predation. We see them in blanched-out, slyly edited flashbacks as they shed their previous identities (which seems to be their M.O.) and adopt the new ones that we’ve come to know. It’s like a self-contained origin story after the fact.

There is a lot to say how absolutely expertly this revelation is managed on a number of levels: about the perspectival sleight-of-hand, about Zahn and Jovovich’s flat-out great performances, and about the extent to which A Perfect Getaway is a film about the slipperiness of spectator identification. (“You gotta dance with the one that brung ya,” goes a throwaway line in the prologue, the sound of a gauntlet being dropped.) But the importance of the visual gamesmanship shouldn’t be understated, especially since it’s the first time in Twohy’s checkered career that the talented but erratic writer-director has fully realized his attempts to significantly color-code his experiments in genre filmmaking.

That ambition is evident in the title of Twohy’s 2000 breakthrough Pitch Black, a movie made under sign of Alien. It’s a grimy, lived-in vision of the semi-distant future, with outer space overrun by cargo ships; its characters look down in the mouth and seldom smile. Its distinguishing gimmick is that it eventually touches down on a planet subject to month-long eclipses where voracious, light-averse beasties congregate to dine: in space, nobody can hear you scream, or see a damned thing. What makes Pitch Black entertaining—and what possibly accounts for it becoming a minor hit despite its B-minus B-movie pedigree—is how skillfully Twohy and cinematographer David Eggby (who shot the original Mad Max) mine the contrast between their setting’s sun-scorched daytimes and the impenetrable nightscapes. The color scheme in Pitch Black ranges from outrageously flared and hyperbolic—lots of harsh yellows and oranges—to barely gradated grey monochrome, with lots of shots of total darkness punctuated only by the glowing of antihero Riddick’s (Vin Diesel) enhanced eyes.

Twohy took a lot of flack for Pitch Black’s sequel, 2003’s The Chronicles of Riddick, and much of it was deserved: the film is overbearing and ungainly where its predecessor was lithe and spry, ditching Alien as a reference point and progressing as a kind of interstellar Robert E. Howard pastiche. But once again, Twohy and his cinematographer—former Ridley and Tony Scott collaborator Hugh Johnson—expressed a desire to play with light and shade. Riddick’s one undeniably awesome set piece is a fight on the surface of a planet (the poetically named Crematoria) experiencing a hellacious sunrise where the temperature goes from zero to seven hundred degrees. The characters’ imperative to avoid sunlight at all costs is a clever flip of Pitch Black’s carnivorous-darkness setup and gives Twohy an opportunity to stage a sequence where something as simple as rapidly receding shadows can become a locus for suspense and excitement.

In Pitch Black and Riddick, Twohy was trying to work in a neo-epic register. By contrast, A Perfect Getaway is more intimate. There are only four major characters (six, if you count the buff props played by Chris Hemsworth and Marley Shelton). And it’s entirely earthbound: the idea for the script came to Twohy while he was vacationing in Hawaii himself. At first, he seems to be on his best studio-hand behavior, too. The early sections, which introduce Cliff and Cydney as deliriously happy young just-marrieds in search of scenic adventure, are no more than workmanlike, but that’s because Twohy really is doing work: dropping the visual, verbal, and aural clues (“red snappers” in the words of one character) that put his story’s big secret in plain sight for anybody who’s paying attention. I’m not going to write about narrative in A Perfect Getaway here, but I will say that anybody who thinks the film is retrospectively a “cheat” should watch it again; there isn’t a single shot or line of dialogue that violates the continuity of the story, and there are more great little gags foreshadowing the true nature of events than one could reasonably be expected to catch on a first screening.

A true genre filmmaker, Twohy doesn’t look to ladle sociological meaning over the top of his material, but it oozes through anyway. The revelation that Cliff and Cydney, who flaunt their PDAs as conspicuously as their material wealth (“our wedding haul!” crows Jovovich while paying for supplies with a wad of cash) are not feckless yuppies but heartless monsters has a certain zinger quality to it. It reframes the aspirational nature of their lifestyle as a sociopathic pursuit, with the joke being that living for a couple of days as J.Crew-catalogue stooges is enough to drive even the staunchest thrill-killers crazy. The insidious brilliance of Twohy’s structure is that it forces us to identify with two characters who are only nominally sympathetic and subtly obnoxious, then keeps prodding us with hints that that the other couple they meet on the island—Niko (Timothy Olyphant) and Gina (Kiele Sanchez)—are the ones we should really be rooting for even as their status as secondary characters makes them suspicious. A Perfect Getaway is at its weakest when Twohy pays lip service to these gambits by having the characters talk about screenwriting itself, but it all pays off beautifully. Upon the confirmation of Cliffy and Cydney’s unsuitability as heroes, Niko and Gina’s eccentricities—his fetching alpha-male arrogance and PTSD tendencies; her aw-shucks country-girl skill with serrated knives—become heroic qualities. When the film ends with these auxiliary figures front and center and triumphant, we don’t feel had so much as happily vindicated.

This is where the color-switch comes in: it’s the key to unlocking A Perfect Getaway. Essentially a short film in and of itself, this nine-minute segment (longer in the director’s cut) recontextualizes the first hour of the film while setting things up for the extended chase-sequence climax (another great thing about A Perfect Getaway is that it uses its twist to move the story along rather than provide a “gotcha” ending). Cutting from Cliff in an underground ocean cave firing at pistol at Niko to Cliff a few days earlier offing some unlucky soul in a waterfront lot, Twohy unveils the character’s true identity. The shift is heightened immeasurably by the presentation. The glossy grey-scale cinematography gives Zahn (and Jovovich) a ghoulish bearing—their eyes become burning black holes—and, more importantly, gives the section its own firm, unbroken aesthetic continuity. Everything we see through this drained, washed-out filter is the material that exceeds the previous jurisdiction of the filmmaking, a kind of “shadow story” that’s rendered hyper-real as a result of its stylized presentation. What’s crucial is that the array of grays in this sequence had previously been absent in the film’s color spectrum. The effect, however subliminal, is of intrusion—pale, unnatural shades clash with the verdant natural textures of the Hawaiian backdrop.

It’s telling that everything after the color-flip in A Perfect Getaway begins to resemble Twohy’s previous filmmaking: the shot lengths shorten, the editing pattern accelerates, and he starts playing with slow motion and split-screens. This would seem like ostentatious overcompensation if the story wasn’t so entertainingly cranked up at that point—Niko’s “rebirth” as a sort of bionic superhero is both a tribute to Peter Jackson’s Brain Dead and another nifty payoff of previously established character information—and if we hadn’t already been primed for this sort of visual escalation by those flashy flashbacks. It’s really all so elegant: Twohy reverses his characters’ positions—and the audiences’ way of relating to each pair—and in the same instant embraces his own true, painstakingly sublimated nature as a recklessly unashamed visual stylist. Form and content, molten and melted into one. If that’s not the only definition of great moviemaking, it’s one that I think holds up fine.