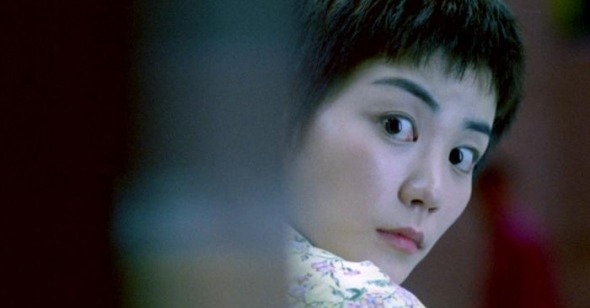 “Is there anything in this world that doesn’t expire?” wonders Takeshi Kaneshiro’s lovelorn cop, known only by his number, 223, in Wong Kar-wai’s grimily splendid 1994 film Chungking Express. Considered the quintessential Wong film until In the Mood for Love sidled into our lives six years later, Chungking Express would seem to be a film with its own expiration date, just like the cans of Del Monte pineapples and sardines that become its strange obscure objects of desire. Yet even though Chungking’s moment (the now hazy cinematic nineties, when it genuinely seemed like everyone wanted to see something that was a little out of the ordinary) has come and gone, there still is nothing quite like this vibrant portrait of one pocket of Hong Kong three years before the entire region was subsumed into China. Its vitality in 2013 is a testament to the nonaggressive inventiveness that marks all of Wong’s cinema.

A main reason for the continued freshness of his films is that they never seem entirely settled; even a perfectly polished tchotchke like In the Mood for Love was, famously, just one version of many alternates Wong could have made from the footage—a seemingly meticulous whole constructed out of spare parts. 2046 is perhaps even more exhilarating in its refusal to assume a sense of completion—it rejects time and space and resolution in equal measure. In retrospect, then, the looseness of Chungking Express comes across as less calculated than it might have considering it was once co-opted as part of the post–Pulp Fiction boom, as Quentin Tarantino brought it to American audiences via his Rolling Thunder company. There’s no strict design to the film: one gets the sense that there could have been an infinite number of other versions of Chungking Express—with just a slight turn, the camera may have alighted on a different lonely soul and begun an entirely new story.

Thankfully, the characters Wong kept in his orbit are enchanting, and wholly worthy of the slowed frame-rate effect Wong and cinematographer Christopher Doyle employed in some scenes, which gives them the sense of gorgeous clarity within a hectic, blurred world. For instance, in many shots in the film’s dizzier first section, boy-band-beautiful pop star Takeshi Kaneshiro and veteran Taiwanese actress Brigitte Lin are brightly vivid while everyone around them in the Chungking Mansions shopping bazaar appear as flashes and light streaking by. The film’s rather diffuse initial forty-five minutes—which parallel 223’s puppy-love heartsickness with the unnamed, blonde-wigged gangster’s drug running and give them only one sequence together—are often recalled as mere extended prelude to the adorable romance it segues into. Yet there’s much to attach oneself to in the rush of images that both buoy and confound these characters. Both Kaneshiro and Lin make for remote figures: his obsessive behavior and her criminal nature are purposefully alienating. We are not brought any closer to 223 by his devouring of endless cans of expired pineapple, enacted as some odd penance for his failed relationship with an ex-girlfriend we never see; she, meanwhile, never takes off her sunglasses, blocking our empathetic connection to her, and seems invested in a strange revenge narrative to which we are barley made privy. Each has his or her own cathartic moment—he reaches an emotional epiphany as he sprints around a racetrack in the pouring rain on his 25th birthday (Kaneshiro was actually nineteen at the time); she coldly dispatches the American bartender who turns out to have been her prey—but neither brings us any closer to them.

Perhaps this is why the second part of the film comes as such a relief. Singer-songwriter Faye Wong’s pixie-ish character, Faye, a new hire at Midnight Express, the take-out joint frequented by 223, doesn’t say much, but the manifestation of her obsessive behavior is at least palpably movie-cute. And it’s hard to blame her hastily made decision to begin stalking cop 663, as he’s played by Tony Leung, who’s given a breathtaking introduction, set to what will become Faye’s anthem, the Mamas and the Papas’ “California Dreamin’”: in full uniform, he walks directly up to the fast-food counter and right into the camera lens—for one moment, the lower half of his face falls out of the screen, and his swoon-inducing eyes take over the frame. Leung’s casual, can’t-be-bothered sexiness befits his character’s initial disinterest in Faye, who counters him with nervous energy, darting around Midnight Express like a hummingbird looking for a place to land. In fact, the similarly lanky Takeshi Kaneshiro and Faye Wong would have made a better pair visually, yet it was not meant to be: when the restaurant manager tries to play matchmaker between them, 223 thinks he’s trying to set him up with a new male employee (we never see Kaneshiro again). The remainder of the film, like any good romantic comedy, tries to convince us that these two opposites—a stoic law enforcer and a goofy rule-breaker—are made for each other.

And we believe it, even after this proto-Amèlie regularly breaks into his apartment while he’s on his beat, surreptitiously cleaning and mischievously switching items, most memorably replacing an oversized stuffed polar bear for an even more grandiose Garfield doll. Throughout it all, Wong Kar-wai keeps his film from devolving into terminal cuteness by enveloping his love interests in truly idiosyncratic cinematic flourishes. For example, there’s a remarkable sequence set entirely to Dinah Washington’s “What a Difference a Day Makes” in which Leung, before his character finally sets his sights on Faye, seduces a stewardess with a toy plane, which the camera follows with a sensuous mobility as he flies it around his tiny apartment; in outline the scene is a lark, a chance for Doyle to get intimate with an object in a dauntingly small space, yet it also conveys much about the characters’ desire for freedom and flight, and our tendencies to create small-scale adventures in our claustrophobic worlds. Faye’s adventure is getting into 663’s mind and physical space, albeit without him knowing; thus her break-ins and marathon cleanings (set to the actress’s Cantonese cover of the Cranberries’ “Dreams,” an omnipresent song in the nineties that here becomes the character’s own unspoken personal expression) have a seriously erotic energy to them.

As such moments make clear, Chungking Express overall has the feel and rhythm of pop music—but in its sense of constant self-creation it’s more like a karaoke performance than a refined studio recording. Made over the course of three months during a break in the filming of Wong Kar-wai’s grand martial arts movie Ashes of Time, it’s a fantastically restless film, a rummaging through of techniques and scenarios that just might jell into an affecting tale of twinned romantic longings. (You can imagine the filmmakers crossing their fingers behind the scenes and in the editing room.) It’s a rare film that is kinetically designed to come at you from all angles, only to ultimately tell a rather simple love story; like Jules and Jim or Punch-Drunk Love, it’s a romance that makes no sense as anything other than cinema. These are people identified by the visual and aural details of their lives, their objects, their music: when, at one point, Faye turns off “California Dreamin’” at 663’s request, she suddenly seems naked. It’s less a reflection of real-world anxieties than an expression of those anxieties—about love, heartache, loneliness—refracted through the glistening, sparkling things that make us want to continue staring at those big, beautiful movie screens.