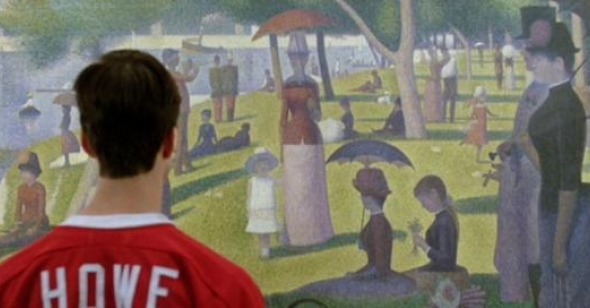 Be Kind, Rewind
Eric Hynes on Ferris Bueller’s Day Off

Home viewing formats rise and fall, then either linger or disappear. The DVD is now on top, but challengers approach. Yet no format will soon have the transformative effect that VCRs had on film culture. Not because it introduced home viewing to the public—movies were screened privately from the beginning, and commonly since the advent of television. What the VCR novelized for film culture was the possibility of ownership. For the first time films could be collected like records, stamps, or bubble gum cards. Beyond a pastime, a passion, a destination, or a favorite, films were now possessions. Displays were made, furniture was fashioned, and the films one owned became a material extension of self—a visible, quantifiable proof of one’s taste and commitment.

For teenagers, ever the most ardent demographic, this meant the obsessive collecting—through purchasing (rare) or duping (rampant)—of book-shaped plastic or slip-box cardboard gussied tapes. Their cravings (and consumer potential) were met by a discernible wave of teen-oriented films. Though some of the Eighties-era teen produce borrowed from mildly titillating, cynically pandering beach-blanket boomer-era diversions, another strain, the most celebrated of which were written and directed by a precocious throwback named John Hughes, had more in common with classic melodramas and screwball comedies. Uncommonly good at speaking to teens’ twin needs for both pathos and silliness, Hughes’s films gave rise to a passionate culture of participatory (and possessive) viewing. Made to speak to, the films became the new language of generation VCR, expressed in line recitations, gestural references, and viral self-identification. Some girls saw themselves embodied by Molly Ringwald (and repaid the compliment by adopting Molly’s sense of vintage fashion); others disappeared into XXL sweatshirts and stoked their inner Ally Sheedy.

For those too young to crave cool detachment, it was a glorious time. For those who were not, the entertainment was fraught. For those in the former category who “matured” past teen-oriented anything, the whole catalog was hastily abandoned as juvenilia. Which leaves us—mostly white middle-class 25-40 year-olds—in possession of an encyclopedic knowledge of several films made twenty years ago that we rarely speak of unless we’re drunk on alcohol or irony. The films may still be good (ensuing schools of kids have prized them as much as we did), but objectivity is nigh impossible. The films are artifacts, both personally and historically, and we still possess them as rightfully as we dismiss them. If we’re to reckon with them, it should involve wading through what became of our sensibilities. For what does it mean to know best, and to have once loved most, a film that you struggle to even categorize as film?

John Hughes movies don’t lose anything on the small screen. That may sound like a backhanded compliment, but only because cinephiles tend to place greater value on the pictorial (or, tellingly territorial: “cinematic”) qualities of film over the meat and potatoes—and eminently televisible aspects—of story and character. Hughes’s art depends on the quality of the writing, full stop. When his writing is good, as in Sixteen Candles, The Breakfast Club, and Ferris Bueller’s Day Off , his films are as funny, exhilarating, and remain as timeless as anything from the post-silent, pre-television heyday of Preston Sturges and Ernst Lubitsch. Those writer-auteurs could emphasize what they wished, make use of the camera without making spectacle, entertain without busily bombasting against irrelevancy, spin a good yarn, talk clever and pratfall with precision, and leave room for the stars to shine. (The same extended to critics, as I can’t imagine another time when James Agee could champion, as he did, Charlie Chaplin’s Monsieur Verdoux—all coded, jokes-caught-in-the-throat dialogue, with major action transpiring off-screen and far from its flat, stage-like interiors—as the height of cinematic achievement.) Hughes didn’t operate during that era, and didn’t receive that level of respect or critical praise, but from the mid Eighties to the early Nineties, he was very, very successful at reaching his target audience of young adults, college students, and post-grads. That these were precisely the years of the home video boom, and that his audience was the generation that fueled and presided over that boom, was absolutely crucial to his success. The John Hughes generation didn’t care a whit about aspect ratios or screen size. They cared about laughing and about feeling smart while laughing, and they cared about relating. Home video and cable television only made it easier to connect, to own the connection and revisit it at will.

Yet even the VCR generation learned to value big screen over little screen pleasures. True, everyone enjoys both, but like coupling versus masturbation, few would voice the reverse preference. Furthermore, maybe it’s the same impulse that categorizes certain works—as we might categorize the onanistic—as “guilty pleasures”: movies that we privately, bashfully adore but sense are not objectively good—either because we fell for them when we were young, with taste unrefined, or because they don’t conform to our mature sense of what makes movies (or sex) good (or cinematic). Now, I’m not going to speak against maturity, or refined taste, or on behalf of badness for badness’ sake. But the distinction, and the high-low arrangement, is as contrived and defensive as film splits past (silent vs, sound, b&w vs, color, cinema vs. television, art vs. entertainment, serious vs. camp, film vs. video, film vs. digital, and on and on). Looking back, we’ve incorporated far more than we’ve replaced, and have consistently expanded our threshold for what we’re willing to see, how, and when. The cinematic vs. uncinematic dichotomy is perhaps the most territorial and destructive, as it attempts to draw a line through the art itself, self-defining by purportedly distinguishing (read: visual) characteristics only, and by a slippery sense of “what it does best,” rather than accepting as its greatest, unparalleled strength its capacity for encompassing and co-opting all other art forms. Zero-sum equations are nigh perverse when you accept that film has sustained itself through countless, rolling additions (while reserving the stimulating right—not cinematic imperative—of subtraction). Beware of the Blob: film in form—if not necessarily format—will sustain itself.

I, like thousands, perhaps millions of people roughly my age, have seen Ferris Bueller’s Day Off several dozen times. The numbers may no longer matter, but I once wore it and its identifying implications proudly. I watched because it felt right. Because it pleased me and still excited me, even though it lacked newness or surprise, and even though I knew that others watched it too. I miss that unself-consciousness, or rather the conscious pleasure of enjoying what others also enjoyed. Not that I enjoyed Bueller primarily because others did, but I was willing to share. I could try to piece how or why, like so many others, I was willing to do so, but I think it’s more revealing to look at how Hughes’s film bulls-eyed our capacity for such universality, even amidst our emerging self-consciousness and taste for exclusivity.

A teen movie, a road movie, a buddy movie, a star vehicle, a comedy, a valentine to a city—Ferris Bueller’s Day Off covers a lot of ground for an ostensibly teen-market-driven film. Its secret is a focused, impeccably plotted script. Taking place roughly during the daylight hours of a single spring day, there’s a premise, a voyage, a conflict, and a resolution. It sturdily features a main character, two supporting characters, a villain, and a supporting villain turned savior. That much of the film is scored to the sub-linguistic belchings of a band named Yellow never compromises its smooth shape and irresistible tempo. Which is not to say that Hughes doesn’t enjoy tweaking the familiar—indeed he does so at most every turn. It’s that he knows enough to install familiar form regardless of the fickle demands of contemporary quirk. This adherence to classic structure actually allows for the strangeness to thrive. The film’s communal/personal appeal starts here, the familiar bones onto which odd flesh is gathered.

Script duly credited, it’s nevertheless hard to imagine the film working successfully with anyone other than Matthew Broderick as the titular protagonist. Asked to be challenging, off-putting, spoiled yet irresistible, likable, and worth rooting for, Broderick somehow is so, never seeming the colossal dick he deserves to be. It’s crucial to what Hughes has in store for us, but no less remarkable that Broderick pulls it off. The right actor at the right age with the right chops at the right time, Broderick as Ferris was partly how I thought of myself—the dynamic me that never or rarely came out—but mostly he was everything (and I mean everything) that I wished I was: funny, sexy, popular, confident, undaunted, rebelliously entitled, loved. His marauding, resentful sister Jeanie could have been me, but for once she’s not. Identifying with Ferris was a joyous, fleeting privilege.

Just as fleeting was my distance from Ferris’s best friend, Cameron (the underappreciated, frame-cleaving Alan Ruck). For once, the nerdy, depressed, and alienated character isn’t our teen hero but a gently mocked stick-in-the-mud. Like jealous sister Jeanie (Jennifer Grey, all cartoonish smolder and full-nasal defiance), Cameron is a more suitable teen stand-in, but Hughes grants a temporary suspension of identification—permission to laugh at one’s awkward self without having to dwell on the mirror.

Wisely, Hughes never shows Ferris or Cameron in school—their outsize embodiments would have clashed badly with the ordinariness of high school. But it’s also impossible to imagine Ferris or Cameron (or Mia Sara’s Sloan Peterson, weak link in perpetuity) doing anything but what the film shows. These are characters not meant to exist in our world, but to exist fully, distinctly on screen. They don’t belong in our space—we watch, re-watch, recite catch phrases, go on Chicago bus tours—in order to enter theirs. Hughes put a triune approximation of suburban youth behind the wheel of an impossibly sweet car and took it for one improbably glorious ride. A single day can’t possibly contain the Sears Tower, Chez Luis, Wrigley Field, the Art Institute, a downtown parade, the lakeshore, and a swimming pool (though the real-world locations and traversable distances between them present a pleasing, though unsolvable, logistical challenge). The suspension of disbelief is slight, but important, as the film wouldn’t work as a real-world-set fantasy if time and space matched with actual experience. The wish-resistant fact that one can’t realize such a day is Ferris Bueller’s bittersweet subtext. What’s wanted is always just a bit more than can be had. Rather than punish his viewers for wanting more, Hughes gives it—albeit within the confines of his gently refracted world, where a vested dilettante can stop a German national parade by lip-synching to Wayne Newton, and a well-placed trampoline can save the day.

As the film’s day closes, there’s an acknowledgement from Ferris—the high point of his direct address monologues—of time passing. He talks of going off to college, of altered friendships and distance. Of rash decisions and failed relationships. Though he’s trying to sound wise and prescient, he doesn’t really know what he’s talking about. But for the first time, after several dozen replays, I can honestly say that I do.

Until this consideration, I had never seen the film in widescreen (and have yet to see it on the big screen). For what it’s worth, Hughes did have a way with deadpan wide shots and punctuating close-ups, and his accelerating cuts effectively sell beauty and pathos as often as they sell jokes. Good to know. But mostly the film remained what it’s always been to me—a favorite room, ever familiar and strange, whose dimensions I know by heart but still enjoy retracing. Whether or not it takes me another decade to rewatch, Bueller will stand tall and guiltless in my permanent collection. On both VHS and DVD.