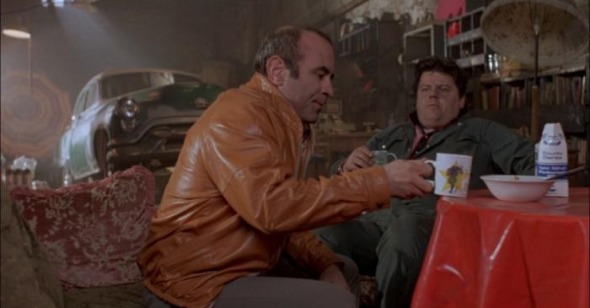 It seems fitting that Neil Jordan, a novelist before coming to film, should give so many of his movies titles from another form—popular song: In Dreams, Mona Lisa, Breakfast on Pluto, The Crying Game. Relying on wholehearted sentiment and well-worn convention, the best pop songs repeat other songs (and themselves) more than a little but make the listener feel the emotion anew each time. They tell stories and sketch out characters and relationships with the direct appeal of one voice, and Mona Lisa is no different. And what Neil Jordan’s own Mona Lisa does is to put faces to those voices and give a perspective to the complex modulations on gender and genre that power songs of romance and their time-tested archetypes of lover and beloved.

In Jay Livingston and Ray Evans’s “Mona Lisa” Nat King Cole sings as an observer wondering about a daunting woman’s past and imputing to her the mystery of the ambiguous da Vinci icon. That sets the scene for Jordan’s film: the durable fallacy of feminine mystery, a fellow’s projected fantasies obscuring the reality of a woman’s native thoughts and feelings. Bob Hoskins plays the guy, George, a working-class bloke just out of prison after eight years. Cathy Tyson is his honored lady, Simone, a prostitute for whom he acts as chauffeur and alibi at the hotels where she meets upscale clients.

Mona Lisa’s story, and its strength, lies in how this relationship develops, but that’s easier said than actually described, because Jordan’s skill lies in taking simple templates and letting loose the forces of genre, class, and gender that shape character, feeling, need. As George falls in love with Simone, and as she involves him in her own secret love, the story becomes tightly interlaced with a series of inevitabilities, self-explanations, and misunderstandings.

Jordan has spoken of the “layers of realism” in Mona Lisa and more generally the possibilities he saw as a novelist in cinema’s “simplicity of narrative.” The texture of Mona Lisa comes from the romantic and crime tropes folded into one another. They are legion: George’s love for an inaccessible woman; his attempt to help Simone save a friend from a life of drug-addled prostitution; Simone’s own My Fair Lady work-up on him. George’s unwitting quest for her girlfriend leads to a typical voyage into the criminal underground—or deeper into it, the dirty underbelly he doesn’t yet know, which (in the English crime tradition of Get Carter) means the world of abusive sex fantasy, prostitution, and porn.

The movie helps us recognize the stories that George gets into. He insists to his friend Thomas (Robbie Coltrane) that Simone is a lady, not a tramp, and once he asks her if she knows the story of the frog and the prince. Thomas is himself a kind of Eighties pomo cliché, the outsider commentator, complete with simulacrum playthings (spaghetti sculptures, Virgin Mary lamps). Their banter about mystery novels focuses on the blind twists of storytelling, analyzing the devices that seem to lead his story one way, then another.

But the clichés of storytelling also have a way of reflecting or even replacing social conventions, and this is a comfort to George. His fantasy of waiting upon a lady frees him from the contradictions that socializing with a prostitute poses for him. It’s a way of dignifying his attraction, dressing it up in class-conscious clothing, because a prostitute would otherwise be one person definitely below him, a working-class criminal. Thomas jibes George over the obvious insecurity: “I thought she was a lady.”

Simone’s race poses another problem, though not one he seems to mention. When we first see George, released from prison and headed back to his old neighborhood and wife, he is shocked to find that, seven years on, there’s now a significant black population. The complexion of London may have changed, but his routine racism hasn’t; only those he vilified are before him in person as perhaps they never actually were before. Calling Simone a lady, in that oldest of fairytales with him as a suitor, is a comforting way of going back in time even earlier, to a more familiar world that he understood and where he had a purpose.

Again and again Simone leads George down a hookers’ alley on a bridge, a carnivalesque parade of come-ons from unseen figures vying with sudden appearances and, once, an eruption into violence. Yet Simone’s own sexuality feels hemmed in: she wears a huge overcoat with a boxy 80’s cut that renders her shapeless, and Cathy Tyson is pretty but boyishly lanky and plays her with an languid detachment. Tall and short, they make a instantly visually odd couple. Hoskins’s own so-called “bullet-headed” body has earned him countless roles as the second fiddle, or the guy who’s tough but never quite makes it (in any sense of the words). (How close to his heart the role is might be suggested by the odd moment in the Mona Lisa commentary when Hoskins talks of seeing gorgeous, mismatched women in Hollywood and thinking “the bloke for you is a little fellow who’ll take care of you.”)

Jordan’s master stroke is to place George’s denial and then discovery of Simone’s sexuality in an atmosphere of constant fear of class exposure. The dangers of revealing the wrong class to the wrong person obsess George, Simone, and even George’s old boss, Mortwell (Michael Caine). George doesn’t want his friend Thomas thinking he’s associating with a common whore, while Simone frantically hushes George, loud in Cockney accent and clothes, in her snooty hotels. When he bursts in on her once, the john sputters that she had claimed she was high-class. Mortwell, too, hustles George away, out of a cocktail party where he’s trying to strike up a business relationship with none other than one of Simone’s wealthy clients.

George thinks he is saving Simone’s old, assumingly underage friend from the streets, when he is actually reuniting lovers. Simone was circumspect and persuasive, and only George’s misunderstanding allows him to do what he wouldn’t do otherwise. In her history as abused prostitute and sexual and racial minority, a threat of violence simmers around the secrecy. It is as if George is a vulnerability, as an ambivalent heart in an intolerant society at large. When George does “explode,” in his macabre star-spectacled forced date with Simone on the Brighton boardwalk, there is a lover’s jealousy and feelings of betrayal, anger, confusion, but not (yet?) a categorical hatred.

What Jordan does next leaves one to wonder—and I wondered—about the problem of representing versus replicating marginalized status, about whether the ending is a cop out or a brilliant dramatization of impossible reconciliation. Before George and Simone can actually come to terms with each other’s doubts and deceptions, Jordan launches one last thriller-movie chase scene with Simone’s former, psychotic pimp (the whole thing reflected in the funhouse mirror of a simultaneous dwarf reenactment). Also according to thriller conventions, the ultimate baddie, Mortwell, has predicted everything and awaits them back at the hotel room.

There follows the cathartic shootout, reminiscent of Taxi Driver especially after the into-the-underworld narrative. But what really is George’s thunderstruck realization, which Jordan unusually, melodramatically signals in a circling zoom? The end of the entire movie is intentionally storybook, George retreating to his unconventional makeshift family with Thomas and his daughter. George’s last view of Simone is a shot of her face half turned away. Is it her right to withdraw, to retain an emotional center, the culmination of her resisting George’s incursions into her privacy? Or is it also a certain barrier that never quite allows access to her sexuality? Mona Lisa may yet be dreaming a new mystique.