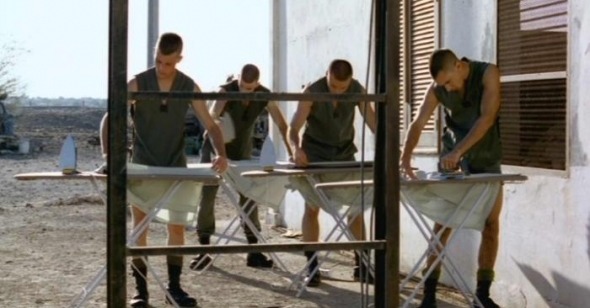 As Claire Denis embarked on making Beau travail, there was a certain amount of resistance to her idea of transplanting Herman Melville’s Billy Budd to the French Foreign Legion in Djibouti. According to Denis, rumors had spread among the Legion that this esoteric French auteur was getting ready to make “an anti-French army film, then a porn film about Legionnaires and young Ethiopian girls, and then a film about homosexuality in the Legion.” When it was finally released, critics hailed it as her breakthrough, but a few critics, including Kent Jones and Jonathan Rosenbaum, dismissed the focus on the film’s homoeroticism as reductive, even though the many scenes of half-naked men performing one ritual after another in unison, and Denis’s own assertions in interviews about the homosexual panic she experienced among the Legion while shooting, seemed to encourage such a reading. So where exactly does Beau travail stand as a queer text? The “So what?” response from Jones in Film Comment, for example, bespoke a fatigue brought on by prior decades of literary criticism in which the excavation of same-sex desire from works that were not openly gay-themed had become a cliché and a dead end. While Billy Budd had been at the center of this upsurge in gay literary studies, by the end of the ’90s when Beau travail premiered, the question seemed to be: what does it profit us to rehearse the same old critical methods—which were fashioned to address closeted texts written in closeted times—in our engagement with a film whose homoerotic content is so self-evident that it needs no parsing to be recognized?

Beau travail is undoubtedly homoerotic, and its screen translation of Billy Budd—a text that bears the vision of Melville and has spawned the operatic reworking of Benjamin Britten and E. M. Forster, all three of whom were famously (or at least arguably) homosexual men—suggests that Denis’s sensuously embodied cinema necessarily outs the story from under its encoded origins, for the simple reason that her camera cannot help but indulge its lingering eye. Homoeroticism in this case involves both the insular world of men that provides the film’s subject and the curious onlooker who lays out these images for our pleasure and contemplation. On one level Beau travail is homoerotic because of the fetishistic gaze of its heterosexual female auteur, whose presence is all the more acutely felt for its interference in an all-male lineage of preceding authors. It’s easy to see how a more conventional or commercially minded artist might have used Billy Budd as springboard for the kind of erotic gay melodrama that gets off on sexual repression.

But while images of shirtless beefcakes branded the film in its stateside publicity for the gay male audience, things are not so clear-cut when it comes to the exact nature of the desire floating around among the men onscreen. Denis dissipates desire into the atmosphere, so that it is only ever as definable to us as it is to the compulsorily heterosexual Legionnaires. At the same time, she treats the potentiality for male-male desire as a given, and even endows it with mythic weight, much in the same way she assumes that Billy Budd’s tale of innocence, repression, and violence has the familiarity of a Bible story. In Melville's novella Denis has located one of the more lucid narratives of her career, and despite her proven knack for obfuscation, it remains relatively easy to follow (certainly when compared to a mind-boggler like L’Intrus) for those who know the central struggle in the original story. In fact, for Denis fans who have fallen under the spell of her rapturous sense of film style only to be frustrated by her obscure plots, this adaptation of a well-known classic offers the refreshing opportunity to set aside our concerns about what is actually happening from moment to moment in the film, especially since it is structured around the epistemological dilemma of an unreliable narrator recalling his memories in voiceover.

Nowhere else in Denis’s oeuvre does our surrender to the pure pleasures of sound and image allow us to completely abandon our urge for coherence and comprehensibility, since her manipulation of that urge is so often intended to induce a certain frustrating level of defamiliarization in us. As in L’Intrus, distinctions between the lived, dreamed, and remembered moment are blurred, but one of the qualities that makes Beau travail arguably her most popular film is the way it roots her unearthly, almost hieratic voice in the flesh and blood of human existence. With the cave paintings of soldiers that appear in the film’s first shot, Denis positions the Legionnaires in the canon of ancient mythic figures and her film in that rarefied field of cinema in which artistic idiosyncrasy takes on an air of mystical authority. The Legionnaires’ internal battles, performed on the level of glance and gesture, come to feel so elemental when combined with Billy Budd that a leap into abstraction seems like the only natural response to the material.

Beau travail’s emotional core may be difficult to decipher from its cold art-cinema veneer, but few films in recent memory have so poetically dramatized the poignancy of the male body. The handsome Grégoire Colin, as the too-perfect new recruit Sentain, embodies immaculate, youthful beauty as a symbol of moral purity. His foil is Chief Master Sergeant Galoup (played by Leos Carax regular Denis Lavant), whose pock-marked face and awkward posture make him look as if he has been gnawed away his entire life by repression. In a number of scenes the camera identifies with Lavant’s gaze, observing the Legionnaires as they frolic on the beach, and too embittered to reenter their carefree world. His implied lust for them is exorcised through a jealous predation on their innocence, and Sentain provides the ultimate challenge to him, blurring the boundaries between his desire and envy. Finally, as the equivalent of the novella’s Captain Vere, Michel Subor reigns over the proceedings with a godlike imperiousness. But by naming the character Bruno Forestier, after Subor’s role in Le Petit soldat, Denis prompts us to compare the actor’s flabby body as he approaches old age with our memory of his younger, leaner self. This subtle allusion operates as a rare, heartbreaking acknowledgment that the bodies floating across the screen are tactile, mortal things, burdened with the weight of their own histories.

Denis does not move the story along with cause-and-effect progression, instead capturing its essence through the tension of one static mood juxtaposed against another. There are two main settings in the film, and like almost all the characters, they preserve an air of mystery and unknowability. There is the Djibouti we experience in the exteriors—a collision of dreary grays and deep marine blues, calm water and rocky terrain, whose monumentality is complemented by the strictly choreographed movements of soldiers in their training sessions. Then there is the world of the disco, where African women writhe to music while throwing come-ons at their own reflections in a wall-sized mirror, and sometimes pair off with lustful Legionnaires. Both these realms are depersonalized and disorienting. The exteriors are so expansive and uniformly desolate that we never get a sense of their limits, while the interiors are so packed with bodies and shrouded in darkness that they become as anonymous as the encounters they facilitate. Almost nothing in the story—not even all the pent-up desire, resentment, and betrayal—comes through to disrupt either of these closed-off environments. Like Sentain (or Billy Budd) himself, the film’s spaces are blank and inviolate, operating as golden principles against which man’s capacity for corruption is measured. As in Melville’s poem “Gold in the Mountain,” which reportedly gave Denis much of her inspiration for the tone of the film, the material world is one of unimaginable riches, to which men can only respond with a nagging greed and dissatisfaction.

Critic Rob White has noted that the Legionnaires’ training exercises, despite once being preparations for violence, are now a choreography “evacuated” of meaning in a postcolonial world. The lifestyle of the Legion becomes a kind of art for art’s sake, an aesthetic vision of manhood whose only aim is the religious maintenance of its own dying traditions. The impossibility of the Legion’s homosocial utopia—one whose ideal is to be closed off from feeling and meaning—is reflected in the alienated perspective from which Denis observes these landscapes. Developed out of a commission for French television, Beau travail set out to explore the concept of foreignness, and it does so by constantly placing each character and setting in the position of being “othered.” For a film that naturally risks making reductive contrasts between two different cultures, Beau travail thankfully never gets comfortable in one normative perspective.

As immersed as it is in the Legionnaires’ lifestyle, the film periodically steps back to frame their precisely choreographed behaviors through the eyes of African women, who seem to view the men’s training sessions as an exotic, silly game. But since the film never fully identifies with these women by attempting to penetrate their psychology or political sentiments, Denis draws yet another circle that simultaneously separates the two onscreen communities from each other, the director from her subjects, and the audience from any particular character. The film poeticizes the way in which any encounter with foreignness, especially within the kind of strictly delineated relationship that colonialism enforced, creates an instability of identity on both sides. Alterity is built into the very fabric of Beau travail, and not only because these cultural differences provide a constant source of tension but also because the film establishes a hall-of-mirrors intertexuality with the works it makes itself “other” to—perhaps most powerfully with its use of Britten’s opera, which provides a few moments of booming, hyper-masculine intensity during the most elaborately choreographed of the training sessions, as if to both reinforce and mock the Legion’s pride in its mythic identity. The soundtrack, which features only a handful of musical interludes, is one of startling contrasts: along with the direct reference to Britten, there is a downbeat Neil Young song wafts through one scene, and a pair of flamboyant club anthems that bookend the film. The viewer feels set adrift in this landscape where global aesthetic and pop-culture references freely collide, even as he is made acutely aware of the constricting circumstances that govern the way the characters relate to each other and to their surroundings.

Perhaps the film’s central achievement as a work of adaptation is how it complicates the Manichean worldview behind Melville’s opposition of pure Billy Budd and evil Claggart. Of course, in true Denis fashion, she doesn’t accomplish this by humanizing Galoup in a sentimental way, or by making him sympathetic. As the film winds to a close, and the camera vigilantly observes in close-up a throbbing vein on Galoup’s arm as he presumably prepares for suicide, we realize we have become acquainted with his sorrow and regret on a profound level—without even being conscious of it. For Denis, a character’s emotional life presents itself on the surface of the body—not necessarily in tears or facial expressions, but in its very form, in the details that make it an aesthetic object. Galoup’s humanity is confirmed not through a profession of guilt, but in a new take on the highly regimented movements he has performed his entire career in the Legion: a furious, solitary breakdance that allows him to finally let loose. It’s yet another startling reversal in a film based on many—not least of all the fact that Denis used a book sprung from an author’s late-career feelings of failure and disappointment to carve her own way into the film pantheon.