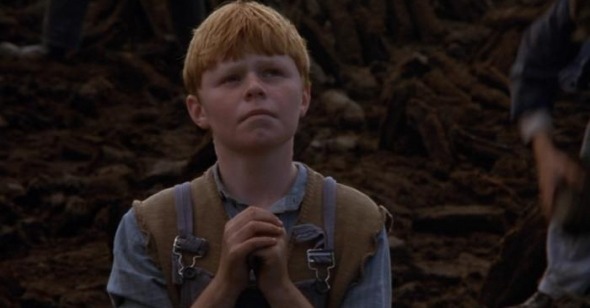 Things would always work out better for Neil Jordan’s protagonists if they’d simply step in line. Dress right. Act right. Dream right. Talk right. Do what’s right ­ that is, what’s normal ­ and accept what’s given. But his are characters that can’t breathe and conform at the same time. They’d just as soon die before doing or becoming the expected. And since the world rarely accommodates them, death seems inevitable. Another director, such as fellow chronicler of nonconformism Milos Forman, would more readily sacrifice his characters for their/his cause, making daffy misunderstood Christs of counter-culture crazies. Not Jordan. His characters don’t operate within the terms of tragedy, and they don’t front well for causes other than their own survival. There are exceptions, but usually Jordan goes out of his way to keep his characters, while not always happy and healthy, alive and sure as hell kicking.

Like so many other Jordan protagonists, The Butcher Boy’s red-headed tweener, Francie Brady (the virtuoso-upon-arrival Eamonn Owens), is a card-carrying deviant. Overgrown and incoherent, he talks too loud and often to himself, losing himself in elaborate fantasies before thrashing back to reality, and acts a little too lovingly ­ gets a little too violently protective ­ of his diminutive blood brother Joe Purcell (Alan Boyle). He’s bent, but even more so than he appears. It’s a matter of limits, and as it turns out, Francie knows none. There’s beating to one’s own drummer, and then there’s Francie’s arrhythmic misanthropy, twisting music into noise and fun into destruction like a malicious non-muppet cousin to Jim Henson’s “Animal.” Bullying other kids, wrecking property, Francie respects no law, authority, or moral code other than a vague pecks-bad-boy/Dennis the Menace/Tom Sawyer up-against-the-world ethos. He’s got his reasons ­ oh, does he have his reasons ­ but he’s also a mean little shit.

A character adapted by Jordan and Patrick McCabe from McCabe’s 1994 novel, Francie Brady poses a stiff challenge to Jordan’s big-hearted tolerance, being at once a strangely sympathetic child and, no two ways about, a homicidal sociopath. Jordan’s answer is to affirm both realities, chronicling Francie’s own victimhood while gazing unflinchingly at his beastliness. Rather than tread carefully, Jordan leaps and skips the moral tightrope with flair, offering an ambiguously buoyant visual language that’s as engrossing and repulsive as his protagonist. And since The Butcher Boy is told entirely from Francie’s point of view (Stephen Rea provides Francie’s voice over.), it’s a perfectly warped illustration of a man-child’s troubled mind, ­bleak and surreal, wishfully fantastical and willfully baroque.

Francie’s madness ­ as well as the indignities piled upon him ­ builds over time, so that his (and our) idea of what’s acceptable behavior slides back and forth on an already uneven line. When does an abused child’s “acting out” become unacceptable? When should self-sheltered childhood start incorporating the realities of a more expansive (though oftentimes just as exclusive) adulthood? When does crafty self-preservation lead to dangerous vindictiveness, and when does Tom & Jerry-style comeuppance become murder? The Butcher Boy poses these questions continuously, but even a viewer utterly unseduced by Francie’s defiant voice would be hard-pressed to spot any answers. Though Jordan does ratchet up Francie’s distress in the preceding scenes, even at the moment of his ultimate transgression I don’t believe that he’s really up to it; I still hope that he’ll rise above and defy the odds. Not that he’d live happily ever after or make a rousing success of himself, but I want his uniqueness to prevail in a defiantly Jordan-esque way. Perhaps I still believe in Francie up until that point because Jordan does too: He shoots Francie’s grisly murder of Mrs. Nugent with the stunned blankness of disillusionment.

Though born to a washed-up, alcoholic father (crucially, Stephen Rea again) and mentally unstable mother (Aisling O’Sullivan), Francie Brady’s lot is only worse by degrees than that of his neighbors. In a stiflingly small and insular Irish town populated by carousing drunks and lonely gossips, the Bradys are the community’s unwelcome id, the ugly prevailing truth they’d rather keep hidden. Though Ma can be driven to the funny farm or voluntarily hung from the kitchen ceiling, and Da can be mocked or overlooked in his perpetually drunken slumber, Francie refuses to be ignored. He’ll do whatever it takes, take on whatever opportunistic persona ­ be it bully, saint or victim ­ just to be reckoned with. The more people try to stifle or hide from Francie, the louder, wilder, and more invasive he gets. Eager to escape from the nightmare at home, Francie at first daydreams with Joe Purcell, hanging from trees and playing cowboys and Indians by the river, and the town is merely an extension of their fantasy world. But as reality encroaches on the fantasy ­ and as Joe gradually moves into more socially acceptable pursuits ­ Francie expands his terrain to incorporate the whole of the town, guiltlessly prying open locked doors and shattering personal space. Somewhere along the way, Mrs. Nugent (Fiona Shaw), the prim and easily appalled mother of nerdy, bespectacled Phillip (Andrew Fullerton), becomes Francie’s chief rival, the embodiment of everything he both hates (conformity, order, righteousness) and desires (familial protection, advocacy, attention). Though we see Mrs. Nugent through Francie’s cartoon-embellishing eyes, and the rivalry is clearly of Francie’s own making, it’s also apparent that Francie embodies Mrs. Nugent’s own fears and hang-ups. Francie feels a pig in Mrs. Nugent’s presence, and fights his insecurity and her judgment by becoming one.

Francie’s socially unacceptable behavior towards Mrs. Nugent gets him expelled from town, the ultimate offense being a deliriously conceived inner monologue that culminates in Francie defecating in the neatly maintained Nugent living room. Frat-house funny though it may be ­ and life-affirmingly satisfying for Francie to witness the horror-stricken expression on Mrs. Nugent’s face ­ the incident is clearly the crying out of a boy in need of rehabilitation. Too bad no one inside the town or out really gives a toss about Francie, not unless he can be employed for personal gain or pleasure. Francie quickly learns to oblige for the sake of his own gain and pleasure, whether it’s acting the reformed Christian child, the crafty and able-bodied drinking buddy, or the hard-working young man. A perverse symbiosis develops between society and psychotic child, with indulgence taking turns with wry opportunism, giving The Butcher Boy an episodic, subjectively satiric Huckleberry Finn feel that grows more and more queasy with every scene.

There’s a heightened sense of Society’s hypocrisy in The Butcher Boy, and if anything’s overplayed in Francie Brady’s favor, it’s this. He’s society’s virus, a mutation that merely mirrors the hosts’ own tendencies, feeding and feeding until everything proves diseased, and then there is death, random and unjust but hardly surprising. Francie’s own lunacy is echoed by the town’s (and by extension the whole Western world’s) Kennedy-era fear of the atomic bomb, a fear based on real possibility but rather absurd in small town, World War II-neutral Ireland. I find Jordan and McCabe’s schematic roll-call of society’s parasitic malfeasance (similarly deployed in their recent collaboration, Breakfast on Pluto) troubling, coupled as it is with Francie’s crafty and inspiring can-do resiliency such that it threatens to place his actions, even considering his eventual act of murder, on the same moral plane as those who mean or intend harm more than they actually do harm, a moral equivalency that, though appealing to my Christian breeding, just doesn’t hold up. Of course, Jordan and McCabe slither free of participating in any such equivalency since the POV remains consistently Francie’s, his tit-for-tat behavior having its own built-in justification for everything he does. It’s this very tangle, this double-back on biases and judgments, that makes The Butcher Boy so stubbornly ambitious, so frustratingly unforgettable, so atonally grand. Though frequently broached, debates over nature versus nurture, individual versus society, right versus wrong, good versus evil, don’t often get this blisteringly compacted, or approached from this disorienting a perspective.

For though we see Francie get the grift from a corrupt, predatorial society, we also see Francie feeding off the good intentions of the big-hearted and optimistic. An uttered phrase like, “the soul of a child is the purest of all” isn’t highlighted to shame society for Francie’s ruination but sounds rather feebly naive in the face of Francie’s bestial malice. Dear Joe Purcell tries to save Francie, exercising his own power as Francie’s favorite human by insisting on restraint and threatening flight, but self-preservation and maturity eventually kick in, and you can’t blame him for distancing himself as Francie’s love grows desperate and totalizingly dangerous. In one of his daydreams, he imagines the town obliterated by an atom bomb, making, “me and Joe the last left in the universe.” And when Francie conjures the Virgin Mother, (Sinead O’Connor, brilliantly cast), you get the sense that he’s putting a load over on her too. She talks as he wishes her to talk, soft and sweetly reprimanding, sentences peppered with “for fuck’s sake.” His Virgin Mother is convinced that he’s just misguided, and otherwise inherently good. In the film’s brief coda, when Francie emerges from institutional life as a red-headed ringer for his father (Stephen Rea again), even Jordan seems ready to soften towards his monster, imbuing the scene with melancholic affection.

Francie is neither the devil incarnate nor a pure-hearted child of God, and the townspeople, for all their hypocrisy and cowardice, know it. After humoring one of Francie’s incoherent rambles, a townswoman says to her dumbfounded companions, “What chance did he ever have the poor creature?” It’s this simultaneous pity and infantilizing shruggery, shared by everyone from his distractedly self-destructive parents to Joe, the townspeople, the clergy, and the oddly admiring law enforcers, that makes them impotent and incapable of helping Francie. They all seem to know it too, passively letting him run ragged until events, or his own momentum, finally make him stop. Whether or not Francie’s inherently good or evil, and sorting out what made him kill Mrs. Nugent, aren’t really as crucial as the easily discernible fact that, though a strident misfit, Francie just wants a place to call home. He doesn’t care if it’s a treehouse with Joe, a cot in a boarding school dorm, a seat in a car out of town, or a world entirely of his own making. After his father dies, drunk to death on the couch, Francie comes closest to getting there. He dons his mother’s apron and house dress and keeps things in order, shooing away flies from the corpse and filling the space with his own unimpeded dialogue, promises and assurances of hermetic peace, tranquility, and triumph. Finally, by denying the natural course of things, channeling his deceased mother and enjoying for once the company of his suddenly unabusive father, Francie is happy in his domain. It doesn’t quite earn him the ultimate, “Francie Brady is not a bad bastard anymore diploma,” but for once he makes perfect sense.