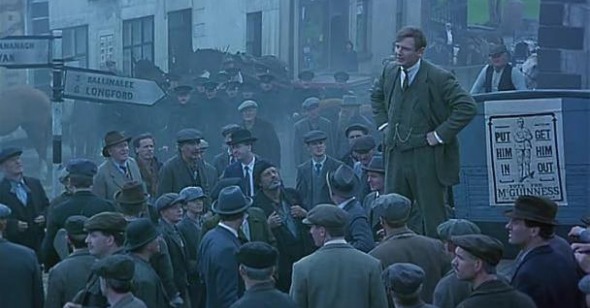 Attempting to dramatize Ireland’s struggle for independence without confronting religion is like trying to explain the history of the American South without alluding to race. And yet, in Michael Collins, that’s exactly what Neil Jordan does; and it’s the single most important factor in understanding why a project with such promise resulted in a film of such emptiness.

On paper, it had looked as though the film couldn’t fail. The director and the star were Irish (Jordan from the South, Neeson from the North), and both were passionately committed to the story. Most of Jordan’s previous films ( The Company of Wolves, Interview with the Vampire, The Crying Game ) had received both critical and public approval. In addition Neeson, after the successes of Schindler’s List and Rob Roy , had become a highly bankable and respected leading man. Most important of all—at least as far as audiences were concerned—Collins’s life was a cinematic dream, merging elements of persecution, patriotism, politics and faith into a tale of stirring romanticism. Yet Michael Collins thundered onto our screens so thoroughly decontextualized—emasculated, in fact—that the motivations of its key players remained distractingly murky. And it was this cowardice, which taints the film from beginning to end, that ultimately proved to be Jordan’s undoing.

The film opens bang in the middle of the so-called Easter Rebellion of 1916, where Collins and his secret army of Irish Volunteers engaged in a bloody battle with British government forces. As the story unfolds, we’re told that the Irish Volunteers are fighting to free Ireland from British oppression; and it’s here Jordan commits his greatest sin of omission. Whether for reasons of economy, sensitivity, or a simple inability to elucidate an admittedly complex backstory, he neglects to explain that Collins’s Volunteers were opposing an Irish Protestant army from the North, which had been raised to fight a Home Rule bill that the British Liberal Government was on the verge of passing. In other words, Collins’s army was raised, not to fight Britain, but to fight Protestant Belfast in support of Britain’s impending legislation.

But in order to explain the Northern opposition to Home Rule, Jordan would have been forced to explain the Northern Protestants’ fear of Southern Irish Catholicism—that, to the North, Home Rule meant Rome Rule. This is not a small thing, as it forms the basis for the conflicts which endure to this day. And as a result of Jordan’s decision to exclude religion from the equation, many later developments in the story are cloudy and unnecessarily confusing. So we watch as British forces massacre innocent football fans and brutalize serving girls, and Collins and his band retaliate by bombing the homes and offices of government officials. But none of these atrocities serve to connect the film to the audience—they’re simply violence in a vacuum. Since we’re never permitted to see the real roots of the conflict, the film has a two-dimensional quality which makes it difficult to care about either the characters or the outcome.

Nevertheless Neeson, with his pensive prizefighter face, gives Collins such haggard intensity and glowering conviction we desperately want to believe in him and his cause. But, as written by Jordan, he’s a one-note freedom fighter, and even Neeson is unable to make him much more than a rhetoric-spouting rebel. The addition of Julia Roberts as charming-but-wispy love interest Kitty Kiernan is an obvious device to humanize her poetic paramour; and the intercutting of his death with the scene in which she buys her wedding dress is a ham-fisted attempt to underscore the tragedy of a story which, properly written, would have elicited audience ache without any need of prompting.

That story is a filmmaker’s dream. Born in a stone cottage in the late 1800s, in the middle of one of the longest famines in European history, the young Michael Collins saw his countrymen starve and the British avert their eyes. Ireland at that time was already embroiled in a centuries-old civil conflict dating back to James I, who had dispossessed Northern Irish Catholic landowners and given their lands to Scots Presbyterians loyal to the Crown. Growing up in a climate of hatred, not only for the British but for the Protestant descendants of the Presbyterian usurpers, profoundly shaped the destinies of Collins and the other founders of what came to be known as the Irish Republican Army. Yet nowhere does Jordan make this clear. And by failing to personalize Collins’s childhood struggles with hunger and religious bigotry—a good screenwriter could have done it in a single scene—Jordan misses a golden opportunity to show the source of his drive and commitment. The result is a leader who is almost an immaculate conception, a guerilla genius so much of the moment that we can scarcely imagine him outliving the length of the film itself.

By choosing obfuscation over clarity, Jordan has given us coolness where there should be heat and shallowness where there should be depth. Only one character manages to transcend this flaw: Irish President Eamon de Valera. Superbly played by Alan Rickman, de Valera is the most interesting and complex character in the movie. With a minimum of screen time—most of it in British prisons—and very little dialogue, Rickman draws a man who is both practical political strategist and implacable patriot. Always at his best in roles which allow him to remain still and focused, Rickman combines his uniquely deliberate line readings with an air of detached superiority to suggest an ominous depth of purpose only hinted at in the script.

Jordan reportedly spent 13 years researching this film, and to suggest that he has taken the low road is not to deny the complexities and contradictions of Irish history, nor to suggest that he is under any obligation to inform or enlighten. But he is under an obligation to present a cohesive, clear narrative and characters whose actions are more than random movement. Fear of upsetting American believers of either stripe—or, even worse, wildly underestimating his audience’s intelligence—is no excuse for shirking the critical issue that would have given his film its backbone.

As the Irish writer Edna O’Brien points out in her captivating book, Mother Ireland , one of the defining features of her homeland is that it “has always been God-ridden.” Jordan’s decision to ignore that fact might have made his film less controversial and more palatable to the powers-that-be at Geffen Pictures, but it has also produced a film which feels soulless instead of gut-wrenching, bland instead of inspired. With Michael Collins, Jordan has casually drained the blood from one of the bloodiest periods in Irish history. He should be ashamed.