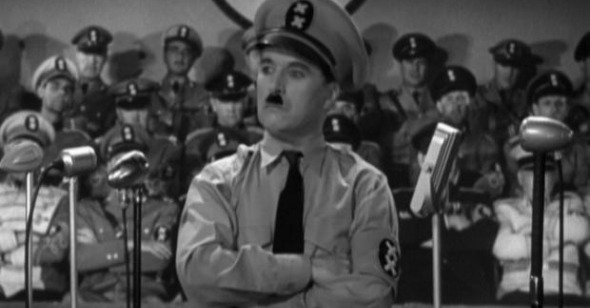 If I dutifully labeled Charles Chaplin’s The Great Dictator a “classic film satire,” most people would nod their heads in agreement. Overlong? Maybe. Not quite as tight or as funny as Chaplin’s best films? Certainly. Still, a “classic film satire?” Undoubtedly. But what does that mean, really? I can remember my freshman high-school English class, in which my classmates and I all struggled with that unwieldy term—“classic”—and agreed that it had something to do with timelessness. Satire, though, relies more than any other generic form precisely on its timeliness. A great satire, like its audience, is always of its time. In that same high-school English class, we read the most seminal of all satires, Gulliver’s Travels, and concluded that we didn’t give a good goddamn how much Swift loved those horses, we just wanted him to stop bugging us about it. It’s not a fault of the book; it’s just that Gulliver’s Travels lampoons people and attitudes sealed in a past far removed from the moment in which I encountered it. So what makes a satire enduring, classic, or canonical? More to the point, it may well be that the things that made The Great Dictator effective satire in 1940 are different from the things that make it classic filmmaking for someone encountering it for the first time today.

History casts an impossibly large shadow on The Great Dictator; it’s fair to say that the specter of death looms over the proceedings from the very beginning. As the opening intertitle clarifies, the film takes place in a “period between two wars—an interim during which insanity cut loose, liberty took a nose dive, and humanity was kicked around somewhat.” Against this thinly veiled backdrop, writer-director Chaplin plays diametrically opposed dual roles: a Jewish amnesiac barber and the Tomanian dictator Adenoid Hynkel. The barber is a war hero, a befuddled and endearing variation on the Little Tramp who wanders out of a hospital some 20 years after the war. He confusedly returns to his barbershop in the ghetto and strikes up a tender relationship with a girl named Hannah (Paulette Goddard). Meanwhile, Hynkel plots the invasion of Osterlich and the ascension of an Aryan master race. Since Chaplin actually wrote the script before the invasion of Poland, the images of the ghetto, the mention of concentration camps, and the aspirations to global domination reveal both an understandable naïvete and a remarkable prescience. The Great Dictator may well be the first Holocaust film in cinematic history, but it remains unaware of that fact.

Chaplin’s blissful ignorance doesn’t extend to contemporary audiences, though. For any of this humor to work, it’s necessary to approach the film with a bit of the amnesia that dogs Chaplin’s barber, to pretend as though there were a way to laugh at the rise of Hitler and the Third Reich. And to be honest, the introduction of Hynkel is an inspired comic set-piece: Chaplin delivers a furious oratory in a guttural and unintelligible foreign tongue as a woman translates faithfully in voiceover. Hynkel’s speech becomes so forceful, the microphone literally shrinks from him; the dictator shrieks endlessly without any translation, until the voiceover explains simply that he’s come to the topic of “the Jewish people.” It’s a great gag, brilliantly conceived and executed, but in the harsh light of history, not very funny. Though I strongly believe that traumatic events on the scale of the Holocaust should never serve as the object of a joke, I laughed. Hynkel’s dance with an inflatable globe, his insistence that “brunettes are worse than the Jews,” and his power struggles with Napaloni (Jack Oakie), dictator of Bacteria, all display the sharp wit, timing, and physicality that made Chaplin a comic genius. Chaplin had no idea that his film would someday play as a humorous send-up of genocide. Even having that perspective, I found myself responding to these satiric riffs on Hitler, Nazism, and anti-Semitism.

Each time we encounter a classic film for the first time, we need to decide whether to evaluate the film on its terms or ours. Where history erodes many great satires by stripping them of their relevance and context, it poses an altogether different problem for The Great Dictator. History has provided a new context that makes the humor seem wildly inappropriate. That’s not to say that filmmakers haven’t tried their hand at post-Holocaust Holocaust humor. But when Roberto Benigni used the Holocaust as a comic backdrop, critics could and did call him on it. Do the same standards apply to our contemporary experience of watching The Great Dictator? Should I, as a filmgoer, feel the same guilt for laughing at Chaplin that I do for laughing during Life Is Beautiful? In academic parlance, these are all questions of historiography, and in this specific instance, they’re ethical questions as well. But there’s no need to get so esoteric—we all ask and somehow, often inconsistently, answer these sorts of questions for ourselves every time we watch a classic (there’s that word again!) film. After all, all films are a product of their time, and every single audience always exists in a specific moment.

The easiest workaround to this dilemma is to bracket content altogether. I could easily write a review of The Great Dictator on formal and generic terms: It features fine comic acting and dazzling set pieces organized around a loose, meandering narrative. The romantic subplot gets too little attention; the satirical framework occasionally feels heavy-handed. Though The Great Dictator was Chaplin’s first feature-length talkie, it works best when it behaves like a silent film.

But what does that sort of analysis really accomplish? For the scholar or the filmmaker, the formal properties of The Great Dictator, like those of, say, Birth of a Nation or Olympia, are worth considering on their own terms. There’s no use writing about The Great Dictator here without talking about what it means to me, intellectually and emotionally, watching it today. As audience members, we respond to movies from a place that is wholly individual but completely unavoidable—a time in history, a place in the world, a moment in our own lives. However much satire relies on a certain amount of timeliness, I can’t help judging The Great Dictator without consciously or subconsciously invoking my own (personal and historical) baggage.

Thankfully, it would be wrong to imply that time has been purely unkind to the film. That specter of death, as much as it complicates the humor, gives the movie a deeply affecting pathos. In one scene, Hannah wonders, “Wouldn’t it be wonderful if they stopped hating us…if we didn’t have to leave and go to another country? Wouldn’t it be wonderful if they let us live and be happy again?” To my contemporary ears, the plea sounds achingly, foolishly optimistic; it singes the film in a bitter tragic irony.

That pathos extends to the film’s final scene. In a turnaround of mistaken identity, the barber takes Hynkel’s place, giving Chaplin the opportunity to close things with a lengthy, passionate monologue calling for peace and understanding. “Let us fight to free the world!” he insists. He goes on to assert that “we think too much and feel too little.” It’s a sentiment worth considering as we ponder this issue of what makes a classic. As filmmaking, this final monologue feels slightly clumsy, didactic, even digressive; it certainly dulls the film’s effectiveness as satire. But still, 65 years after The Great Dictator’s release, its closing scene moved me to tears.