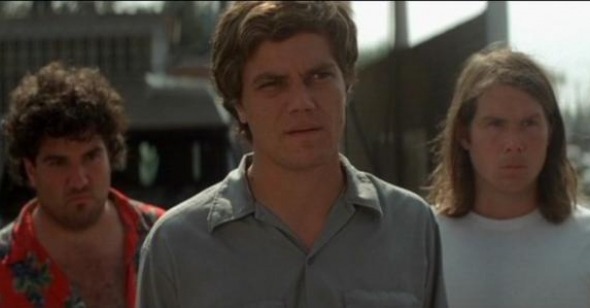 “It’s all that okra that she eats,” says ’night, Mother’s matriarch, Thelma Cates (Anne Bancroft), to her daughter, Jessie (Sissy Spacek), to explain why the older woman’s closest friend, an eccentric named Agnes, is the way she is. “You can’t just willy-nilly eat okra two meals a day and expect to get away with it. Made her crazy!” This is later revealed as a white lie—Thelma is trying to hide the fact that Agnes doesn’t come around because she’s simply spooked by Jessie (and her cold hands)—but what matters here is that it momentarily passes for truth: Okra is a staple in the town where Jessie and Thelma live, and local superstition suggests that the vegetable has the ability to disrupt normal behavior.

The surest safeguard against this form of derangement? Everything in moderation. ’night, Mother, a 1986 Universal Pictures release directed by Tom Moore, who also helmed the Broadway production of the Pulitzer Prize–winning play by Marsha Norman, is an earnest work that traffics in such truisms. It takes place almost entirely in one house in the space of one night—the night on which Jessie plans to end her life with Daddy’s pistol. She gives Mother verbal notice as the clock ticks away (in her first on-screen action, Jessie even synchronizes the house’s timepieces, all collected on the kitchen counter), touching off the wildly emotional one-on-one that makes up most of the film. Jessie tells her mother that she’s simply tired of life. Divorced, estranged from her son, and lacking hobbies, Jessie no longer derives any pleasure from anything, and doesn’t see the point in keeping on. Jessie muses that if she “really liked rice pudding or cornflakes for breakfast or something”—again with the regional delicacies—she could soldier on, but she doesn’t, and so she can’t.

The precise geographical setting of ’night, Mother is never expressly stated, and, aside from plaintive bookends that show the exterior of the peaceful but shuttered Cates house, there are few glimpses of the surrounding landscape. Moore’s attempts to make the play more cinematic appear to consist of a few shots that stray into the driveway and the front yard and a number of off-puttingly fluid dolly shots that describe the space of the house (the director of photography is Stephen M. Katz) as Jessie goes about various chores. But from the two principals’ thick drawls, Jessie’s down-home adherence to the bylaws of good housekeeping, talk of family rivalries and ne’er-do-well children, and the record of what’s in the pantry (hard candy, mostly)—not to mention that homespun okra wisdom—we can assume this movie’s coordinates are somewhere quite deep in the American South. (The playwright Norman hails from Kentucky.)

So there is some suggestion of the world immediately outside the Cates’s unassuming but well-appointed home—those carefully parceled-out views of the home’s exterior; Agnes and Jessie’s brother, Dawson, are spied in the driveway—but the domicile largely exists apart from its surroundings, if not outside of time. The two-hander is largely isolated from broader social concerns. There is a heavy emphasis on food in creating a sense of place, and even food is presented here less as something consumed socially, among friends, than something prepared and enjoyed in the privacy of the home. For its part, the Cates house is mostly an exceptionally private space—a repository for mementoes so unique and precious that Jessie sees fit to repackage some of these forgotten treasures as her parting gift to her mother—which Jessie puts in immaculate order before taking her exit.

Representations of the kind of closed-off, practically sanctified domestic space seen in ’night, Mother have largely been absent from recent independent films that might be termed “regionalist.” Rural South and Midwest–set films like George Washington, Ballast, and Winter’s Bone have focused primarily on marginalized elements of society, often depicting the lower classes as inhabiting houses whose contents spill out into the surrounding yards; there is no time or means for organized, systematic housekeeping such as Jessie’s, merely a take-what-we-can-get scavenging for items that might down the line be useful (and an opportunity for apparently artless art direction)—mangled bicycles, broken-down appliances, repurposed furniture. In these films, it’s sometimes hard to determine what’s private and what’s public: They take place largely in ramshackle compounds littered with detritus, and neighbors come and go, traversing indeterminate property lines. A defining quality of regionalist cinema today seems to be a partial erasure of the subdivisional boundaries within any given geographical domain, removing what might be perceived as barriers between people and place.

Nowhere is this particular type of liminal day-to-day existence more painstakingly sketched out than in Jeff Nichols’s Shotgun Stories, which was produced by David Gordon Green. The film follows three close-knit adult brothers, the cruel indifference of their father quite brilliantly conveyed by the sliding scale of their given names: Son, Boy, and Kid. Son (Michael Shannon) occupies a house with his wife, Annie (Glenda Pannell), and their child, Carter (Cole Hendrixson), but at the beginning of the film she has left on account of his gambling. (Her absence is first conveyed by empty drawers, also an important signal of Jessie’s impending absence in ’night, Mother.) Son invites Kid (Barlow Jacobs), who lives in a tent on the lawn outside the family home, to join him inside while she’s gone. Boy (Douglas Ligon), a basketball coach more mild-mannered than his brothers and fond of trivia (“I think [Charles] Barkley did a voice in Fievel Goes West”), inhabits his van down by the river, constantly rigging up ludicrous leisure contraptions (at one point he drinks a makeshift margarita from a blender while kicking back on a Styrofoam-cooler footrest). “Don’t it get hot in here?” Son asks Boy, referring to the van. Boy hauls out an air-conditioning unit he attempted to run through the cigarette lighter, shorting out his stereo in the process. “Hey, if I come out to the house later, can I use the VCR?” Kid says to Son. “If you bring some Doritos,” Son responds.

Despite this self-conscious pileup of brand names and outmoded technologies, Shotgun Stories is the rare recent regionalist film to acknowledge an alternative to this hardscrabble way of life, the depiction of which too often becomes an end in itself in films like Winter’s Bone, which privileges atmosphere and authenticity over all else. The central conflict of Shotgun Stories ignites when Son, Boy, and Kid’s mostly estranged mother shows up to inform them tersely of their father’s death and his upcoming funeral (Son: “You going?” Mom: “No.”). Their father had some sort of spiritual rebirth, and then a second family, with four more sons, all of them tagged with respectable first names (Cleaman Jr., Mark, Stephen, and John). They’re all out front and center at the funeral. At the end of the ceremony, Son, dressed in a white undershirt and jeans, gets up to say a few words. His father’s second wife assents. “Just because you stop drinking, call yourself Christian, get a new life, start a new family, that doesn’t make you a different man,” says Son, channeling years of bitterness, and ultimately inciting a war between the two Hayes clans. It escalates slowly but surely, with deadly consequences.

The interior of the other Hayes house, which we only glimpse once (most of the conversations among the other Hayes brothers occur around a shiny new John Deere tractor), more closely resembles that of the Cates’s in ’night, Mother. During that one moment, we see the matriarch in bed, and Cleaman Jr. (Michael Abbott Jr.) covering the window with the ornate drapes before moving to the bedside to give her a pill and a glass of water. This is a realm of comparative privilege, and it’s neatly self-contained, able to be effectively sealed off from the outside world at a moment’s notice (’night, Mother opens by showing us various exterior angles of a house with all its immaculately white shutters closed). In one very brief scene, the stakes of the central dispute are heightened—these are two different ways of life brutally colliding. Judging from what we see of his house, Son’s most prized possession appears to be an electric coffeemaker.

’night, Mother and Shotgun Stories confront death on intimate scales, and for all their different concerns (the former is essentially a women’s picture; the latter deals with masculine notions of standing your ground), both are domestic tragedies preoccupied with housekeeping, or a lack thereof. In Shotgun Stories, the landscape serves not only as a staging ground for the central skirmish, but almost as a participant in it: Kid and Boy scatter their stuff around and well beyond the yard of Son’s house, as if it were prepared to take root in the ground; the glimpses of both Hayes families’ properties give their blood feud a crucial dimension of class conflict; and the film’s moments of physical confrontations largely occur out in the open, in broad daylight. Violence seems latent not only in the bloodlines of the characters but also in the landscape itself.

’night, Mother’s one instance of violence, on the other hand, occurs safely behind closed doors. The well-kept, comfortably divided interior space serves to make the movie’s pitch-black themes more palatable—assuring the viewer that everything in the Cates home, at least, has its right place. (Jessie’s lack of interest in local-favorite dishes also situates her as an exception, an outlier in her native South—in other words, this type of hopelessness doesn’t necessarily come with the territory.) Jessie’s suicide plan seems well reasoned, its each aspect carefully weighed, a logical extension of her orderly system of housekeeping, rather than an impulse formed in resistance to it, or from some external disturbance or sense of not belonging. Life, according to ’night, Mother, is full of disappointments, yes, but also little pleasures, and the tragedy of the film is not so much that Jessie kills herself—this seems more or less a foregone conclusion, no matter how intensely Thelma protests—but that she has lost sight of the consolations of the home (marshmallows afloat in hot chocolate, a kitchen-table heart-to-heart), the one little corner of the world we make entirely our own.