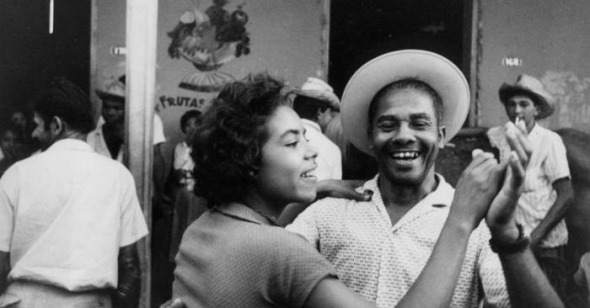 Staying In is a Reverse Shot series that focuses on films our writers have viewed at home through all forms of digital distribution, from cable on demand to downloads to instant streaming. With Staying In, we hope to expand our ideas on film watching and criticism by getting out of our comfort zone—the theater.

How do our brains work when we’re watching movies online? I ask because I feel a distinct difference between viewing a film on my 37-inch television, at a relative remove from where I’m relaxingly slumped on my couch, and staring at it on my 13-inch laptop, upright in my desk chair (if I’m supine I find I’m angling oddly to see it correctly). Yet my concern has little to do with the comfort factor. When I’m on a computer, I must admit I have a hard time focusing. Historically, concentrating has not been an issue for me in terms of viewing: familial lore has it that when I was taken to see my first movie, at the unholy age of two, I sat straight-backed, eyes wide, and immobile for the entirety of Disney’s Cinderella—this from a hyperactive kid with destructive tendencies (you should have seen my mother’s record collection). Save the occasional laundry movie (The Devil Wears Prada, stellar) or a commercial-interrupted broadcast, movies often force me into cocoonlike states; but thus far, watching movies on my MacBook has made me antsy. Maybe it’s the natural response to being in front of a computer, but I’m compelled to reach out and “see what else is on,” which in this case is not to be selected from a variety of other channels but rather from the entire internet landscape. Even the thought of it makes me jittery: with so many choices at my fingertips, how do I know I’ve made the right one?

Chalk it up to individual emotional makeup perhaps. But a godsend for me, and I imagine for many other cinephiles with newfound, technological-based attention deficit disorder, is the proliferation of once hard-to-find classic shorts online. My thinking will clearly evolve (just as I have gone from Luddite to reluctant embracer of new media), but for now I still prefer to view feature films on televisions, at a safe eye-protecting distance, while short films are just the ticket for the casual movie watcher-slash-web surfer. And with such sites as Mubi.com able to curate historically important short works and stream them with crystalline, high-quality images, it’s hard to resist the lure of the nugget-sized movie. After getting home from work but before dinnertime, I found myself scanning Mubi’s options—while I decided I will soon try to watch such home video–unavailable and rarely screened works as Lions Love and the original The Housemaid, I settled on a few selections perfect for my short attention span: early British filmmakers Cecil Hepworth and Percy Stow’s ten-minute 1903 Alice in Wonderland; French animator Émile Cohl’s two-minute 1908 Phantasmagorie; and the epic pièce-de-resistance, Agnès Varda’s half-hour 1963 documentary Salut les cubains. The first two were exactly what they promised to be, curios made magical especially for the fact that they are extant, and are being projected at me through my computer in 2011, with all their wavering, scratched, early cinematic charm. The third is worth discussing more in full not by virtue of its relative lengthiness, but because of the way such discoveries are able to allow us to further discuss and situate auteurs who have perhaps in the past only been known to us through a few key works.

For Agnès Varda, the touchstones are clear: Cléo from 5 to 7 (1962), Le bonheur (1965), and Vagabond (1985), with the helpful bookends of her first and final films, La Pointe Courte (1956) and The Beaches of Agnès (2008) to place them in emotional and film historical context. Many of Varda’s other films have been out of commission for years and by reputation deserve to be, say many. Yet if we are only to get a sense of an artist’s entire career through their masterworks (Cléo and Le Bonheur, to my mind) as well as their failures (the aforementioned Lions Love, according to more than a few), then we should welcome such services as Mubi, which has made a great deal of Varda’s previously hard-to-find work available to stream. Salut les cubains, made directly after Cléo, is neither masterwork nor grand failure; it’s too slight to be either. What it does do, which is valuable, is make visible the blind spots not only in her approach to political filmmaking but by association that of her French New Wave contemporaries.

Perhaps it’s unfair to knock such a clearly of-its-time little charmer, but the starry-eyed optimism of Salut les cubains, told almost entirely in still photographs Varda took while vacationing in Cuba ten years after the beginning of the revolution (Chris Marker, unsurprisingly, is one of the many names thanked in the opening credits), makes it little more than a dazed relic. Narrated by Varda and Michel Piccoli, Salut les cubains has the look, feel, and tone of an educational 16mm reel one might watch in history class in junior high school—if not for the particularly sixties French leftist perspective, one might mistake it for a American Good Neighbor Policy effort from the forties. The revolution is looked back upon as “lyrical” and having contributed to the conquering of widespread illiteracy among the peasantry; the 37-year-old Fidel Castro is described as the “Latin Gary Cooper”; images from dusty smaller villages are given admiring cinephilic lip service, with Varda name-dropping westerns The Big Country and Johnny Guitar); sweeping agricultural reforms come at no visible extraneous cost; Cuban women are complimented as the sum of “African pride and Spanish spice.” This sort of unquestioning exoticism hasn’t by any means disappeared from the work of ostensibly liberally engaged filmmakers (see Slumdog Millionaire), yet it’s fascinating not only for revealing a certain naiveté of the cultural moment but also of the artists living in that moment—initially Varda gently mocks the “received images” of cigars and beards used to typify Cuba but then goes on to revere a entirely different succession of stereotypes.

Salut les cubains is better as a celebration of a cultural and artistic moment in a nation’s history, viewed happily by an outsider. There are plenty of delights, from a soundtrack of Guanguancó and Afro-Cuban music to stills of singer Benny Moré rhythmically arranged so it appears as though he’s dancing in front of our eyes (this coming to life is even more poignant since Moré died before the film was completed) to celebrations of poets such as Roberto Retamar and painters Raul Milian, indicative of the thriving literary and abstract art scene in early sixties Cuba. Here, Varda’s celebration seems most vivid and, as Castro himself describes a “revolutionary” in a speech that constitutes one of the film’s only moving images, even “generous, selfless.” In these moments I have sufficiently been transported the way I was clearly intended to be, even from my little laptop. Soon, my tendency to web surf paid off, as well, as I found out that Varda’s even rarer six-minute 1976 short Plaisir d’amour en Iran, a similarly simple yet more emotionally open love story cum photo essay, was available to watch for free (at a much lower-quality image) at UbuWeb. For this auteur, two more pieces of the puzzle fall into place.