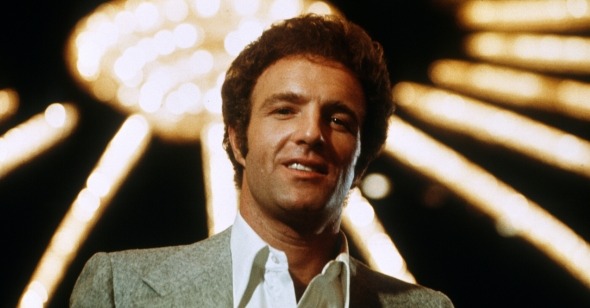 The Long Caan
Sarah Fensom on James Caan in The Gambler

When we first see James Caan in El Dorado (1966), he’s wearing a black hat and fatally knifing a man in a saloon. Though Caan wasn’t playing a bad guy in the Howard Hawks film—his major Hollywood breakthrough alongside John Wayne and Robert Mitchum—this introduction is a prescient one. Caan, whose career spanned six decades, would often embody men walking criminal or self-destructive paths. He was a killer (The Killer Elite), a con man (Bottle Rocket), a crook (Thief), and almost always a character doggedly pursuing some outcome that demanded extraordinary emotional and bodily sacrifice (Rollerball, to name just one example).

This month, Museum of the Moving Image stages its annual Caan Film Festival. A playful riff on the famed French film festival of nearly the same-sounding name, the series, dedicated to the Sunnyside, Queens-raised Caan, has been a fixture at the Museum (located in Astoria, Queens) for four years now. But in the wake of the actor’s death in July, this year’s edition, running from September 16–October 9, takes on a deeper resonance.

The festival chronicles Caan from El Dorado to Elf (2003), his late-career comic turn alongside Will Ferrell. Sandwiched in the middle is Francis Ford Coppola’s The Godfather (1972), the film for which Caan is best known. His turn as Michael Corleone’s hot-headed brother Sonny kickstarted a ten-year streak of roles that melded Caan’s menacing physicality and unwieldy intensity with the brusque masculinity of New American Cinema. The innate aggression that punctuated Caan’s 1970s run gave way to his more scattered work in the late 1980s-2000s, and when he popped up in Rob Reiner’s Stephen King adaptation Misery (1990) after some time away from acting (and battling a cocaine addiction), his very presence, in a role in which he was basically bedbound, heightened the film’s drama, the audience recognized the immediate irony of a threatening person being threatened. Even in Elf, his anger is held so closely under the surface, it seems capable of charring the goofy Christmas comedy’s marshmallow exterior at any moment.

That tension that Caan carries merely by being on-screen might be best exemplified in The Gambler, the 1974 film directed by Karel Reisz from a James Toback script. It follows Caan as Axel Freed, a clever Harvard-educated literature professor and gambling addict from a well-to-do New York Jewish family. After he loses$44,000 in a smoky underground Manhattan casino, we watch Axel thrust himself into one nail-biting scenario after another, but it’s Caan’s cool detachment and mysterious intelligence that drive the film’s sense of anxiety and doom as he keeps placing bets.

The Gambler is one of Caan’s most remarkable roles because of the depth of Axel’s characterization—though Caan is always emotionally potent and slyly funny, he’s rarely this nuanced. Throughout, Axel becomes a sort of coat hanger for various personas, with everyone in his life—his kind-hearted bookie (Paul Sorvino), his physician mother (Jacqueline Brookes), boot-straps furniture magnate grandfather (Morris Carnovsky), Texas co-ed girlfriend Billie (the criminally underrated Lauren Hutton), and his basketball-playing star pupil (Carl W. Crudup)—draping their ideas about his identity on top of him. They all claim to know who Axel is supposed to be, a witty Dostoevsky-quoting intellectual in tweeds and corduroys and a classy, hobbyist high roller with the familial capital to cover what should only be marginal debts. It’s Axel’s—and Caan’s—canny ability to step in and out of these identities that keeps the people in his life believing in him even when he’s revealing exactly who he is: an addict and a loser. In his 1974 New York Times review, Vincent Canby wrote that The Gambler “prefers to consider Axel almost romantically, as a kind of artist whose misspent life is his work-in-progress.” Indeed, the film depicts losing as a sort of art, and Axel, a risk-taking loser, as a singular man of genius. Canby’s observation, meant derisively, is actually the key to understanding Axel’s behavior, his sense of philosophy, whimsy.

Lecturing his class on William Carlos Williams’s analysis of George Washington in In the American Grain, Axel describes Washington as afraid of losing, saying there are certain lines he won’t cross. He quotes D. H. Lawrence: “Americans fear new experience more than they fear anything. They are the world’s greatest dodgers, because they dodge their own very selves.” Later, he puts it more simply to his bookie, Hips: “If all my bets were safe there just wouldn’t be any juice.” Here is Axel’s artistic manifesto, it’s the pursuit of risk, of “certain lines,” that makes him feel greater than who he’s supposed to be, greater than his limitations, greater than the expectations of others.

But while he pursues the sensation of fleeting victory, others expect some sort of lasting greatness. Hips tells a group of mob guys that the gambler is a “famous writer.” At a swanky birthday party at his upstate mansion, Axel’s beloved grandfather, A. R. Lowenthal, introduces him as a distinguished professor of literature and a “future author of immortal books.” Of course, all the “publish or perish” free time Axel the professor could use for writing goes into gambling. All the white-knuckled stress of intellectual work, all the uncertainty and anxiety, is siphoned into more literal risk-taking.

At the party, when Axel delivers a speech in his grandfather’s honor, the old man doesn’t realize that his grandson has taken the story of his hardscrabble success too literally. Axel describes how his grandfather knifed a Cossack king in the old country, scraped by on the New York streets as a teen to provide for his family, and began an empire of furniture stores by age 20. Axel commends his “wit and balls and will,” and notes, “every time I think my reach is stretched too far, I remember the moves that he has dared.”

Later, when his grandfather meets Billie, he tells him, “She’s not meant for a scholar, she’s meant for a club man, a playboy, not a man of character, virtue—not for a Jew.” Axel bristles at the box he’s been put in. After the meeting, he uses the $44,000 he has borrowed from his mother to place bets on three college basketball games and take Billie to Vegas.

Axel’s mother, whom Axel boyishly plays tennis and dances with, harbors a sense of maternal, but also class-based shame towards her son’s gambling habit. Her family’s upward mobility was supposed to secure not only Axel’s safety but also a rosy, top floor-slot in the city’s class structure. Instead, his addiction put him on the ground floor with bookies and mob stooges. With pained innocence, she asks Axel what those guys might do to him if he doesn’t pay his enormous debts. She sorrowfully gives him the $44,000 he owes, going to two banks to do so. When Billie asks him later how he got the money, he flippantly says he killed someone for it.

In true Caan fashion, it’s with his body that he most clearly exercises Axel’s creed, throwing it around and putting it in places it’s not supposed to be. After he loses the initial $44,000, he gobbles a sandwich in the casino kitchenette like an athlete refueling during play. He challenges a group of Black teenagers to a game of basketball on a city court. He physically threatens a cocky bank teller (a young James Woods) when he tells his mother he needs additional identification for her enormous withdrawal. And in the film’s climax, after he’s released of all his debts, he sacrifices his body in pursuit of what he believes is an expression of his soul: a relentless push against the boundaries of his reality. Axel solicits a prostitute in a bar and then deliberately instigates her pimp by refusing to pay her. A tussle ensues, and The Gambler ends poetically with a knife fight. The film’s final moments shimmer with a lucidity that reflects a major theme running through the actor’s oeuvre—his body in peril seemed to uniquely express the deeply sad and tender subtexts that course beneath sensational acts of violence.