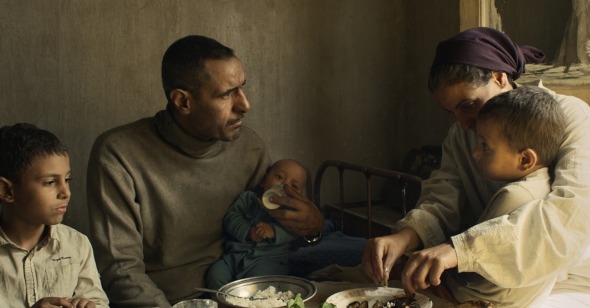 This Woman’s Work
By Matthew Eng

Feathers played at Museum of the Moving Image as part of First Look 2022 on March 19.

Like the dusty, disregarded Egyptian city she calls home, the protagonist of Omar El Zohairy’s debut feature Feathers is never given a name. Nor is she given much of a voice. All we know of this woman (Demyana Nassar) is what we watch her do. She rises early in a cramped and dilapidated apartment where the walls are chipped and yellowing, where there is always wash drying on a clothesline in the kitchen. She cooks breakfast, makes the beds, and patiently waits for her husband (Sami Bassiouny) to count out the money for that day’s groceries, the bills stashed in a lockbox that only he has the key to. When this lordly patriarch, a worker in the nearby factory, speaks to his wife—say, to request stuffed eggplants for supper or comment on the freshness of their milk—she keeps silent, her avoidant eyes permanently locked into a thousand-yard stare. When smoke from the adjacent factory threatens to billow into the room, she rushes to the windows and locks them to protect her infant; it is one of innumerable daily actions, performed swiftly and reflexively.

Save for a cryptic, inflammatory opening, Feathers continues in such dour fashion throughout its opening passages, outlining the patterns of a submissive woman’s humdrum day-to-day. Things perk up somewhat during a boisterous, at-home birthday party for one of the family’s sons, during which a magician performs. When it comes time for the classic disappearing act, the patriarch, at his most grandstanding, climbs into the trick box. The magician and his assistant close the lid, shift some slats, and pull out a chicken to the guests’ delight. But when it comes time to bring back the master of the house, he is nowhere to be found, no matter how many times the box is checked and maneuvered. Only the chicken remains.

And thus, just when a viewer may believe they have Feathers all figured out, the filmmaker fleetly pulls off a startling sleight of hand, oscillating between the grimly quotidian and the absurdly comedic without confining itself to either register for too long. From a magic trick gone awry, El Zohairy and co-writer Ahmed Amer concoct a feat of magical miserablism whose basic premise and bewildering twists are best preserved without any foreknowledge. What begins as a portrait of female subservience that utterly eschews psychological interiority transforms into a deceptively simple allegory of a repressive society that refuses to treat its female inhabitants as capable, equal individuals with or without the stewardship of a male authority. Feathers is a caustic rejoinder to a country still dragging its feet on gender parity, particularly when it comes to the issue of labor.

Even with the absence of a boorish husband, life becomes no easier for this anonymous wife, who is forced to assume responsibilities that she is continually thwarted from solving. The family is two months behind on rent and ridden with debts that only keep accruing. There are unpaid loans owed to the factory bosses, plus fees for private detectives and witch doctors, all of them grifters. There are bills for the veterinarian when the bird becomes ill and the subsequent vitamins and equipment it requires. There is also the emotional cost of handling the temper tantrums and undeniable grief of sons suddenly, inexplicably without a father. And, always, there are mouths to feed, including that of a chicken who may be a man. (Trusting his audience, El Zohairy only ever implies this preposterous possibility without once explicating it.) She tries to enter the workforce, but her husband’s factory refuses to hire women, claiming it would be against the law. Faced with dwindling choices, her marital bed literally repurposed into a chicken coop, the wife comes to rely on her husband’s older employer for cash, food, and transportation; to her dismay, such generosity does not come out of the goodness of this lecher’s heart.

Feathers is fueled by a quiet, quaking fury at a social imbalance predicated on inequity, exploitation, and rigid male chauvinism. Vittorio De Sica might have run with this premise in his day, but this is a tougher and wholly unsentimental treatment that is exemplified in the near-mirthless presence of its lead actress. In her first film role, Nassar delivers the rigorously disciplined performance of unyielding stoicism that Feathers needs. Though she seems to wear a single expression for most of the film, she is still capable of surprise: when the wife, dragged to an all-male social club by her husband’s boss, can no longer sustain her amusement at an especially flamboyant dancer, the laugh she emits jolts after nearly an hour of downcast stolidity. Nassar doesn’t need to alter much of her performance to suggest that there is a rage rustling beneath her bowed head and hunched shoulders, just as El Zohairy doesn’t need to hector his audience by verbalizing the inhumanity that resounds in his images. Commentary comes sidelong, like in the fleeting conversation between two factory supervisors who scheme to catch their hard-up workers stealing by imposing routine searches on them and who would rather allow a prepubescent boy to work on their floors than a woman. Like the chain-smoking Real Housewife of Egypt who eventually hires the protagonist to scrub her marble floors, these factory supervisors are committed to keeping the lower classes in their place, wringing them dry of all the time, labor, and energy they can expend.

Otherwise, El Zohairy bakes his politics into the film’s narrative circumstances and visual rhythms, which connote the sense that an already arduous life is only getting harder and more soul-depleting. In collaboration with cinematographer Kamal Samy, who brings austere beauty to each detailed, deep-focus frame, the director describes the parameters of this world with a Bressonian attention to comings and goings, hands that give and take, paper currency that never stays in one’s pocket for too long, changing hands with rapacious regularity. El Zohairy has name-checked Bresson as an influence on the film, alongside Aki Kaurismäki, Jacques Tati, and late countrymen such as Youssef Chahine and Mohamed Khan. But in its subversion of traditional character arcs and its static shots of workaday domestic drudgery, Feathers most closely echoes Jeanne Dielman, 23 quai du Commerce, 1080 Bruxelles; when Nassar’s character fails to close the windows one day and lets smoke into the apartment, the lapse recalls the pot of burnt potatoes in Chantal Akerman’s 1975 magnum opus.

El Zohairy’s film, which took the top prize at Cannes Critics’ Week last year, recalls these distinguished predecessors while abounding with singular creative flourishes. The jangly pop tunes and motley TV programs that blare through the apartment somehow only heighten the disquiet. The tumbledown vet’s office seems to be run by the haggard animals who reside and meander there with free rein. When the wife walks to a police station in a wide shot, a spooky, thrumming sci-fi sound lends the moment an alien quality befitting the gloomy isolation of her parched surroundings. And despite the wry tone and merciless narrative progression, Feathers bears real sincerity. This is a film that takes the time to twice pause on a boy’s anguished cries for his absent father and expresses a mother’s tender, tactile, wordless regard for her children with caresses, sweets, and fleeting excursions. When this same mother wanders into her bedroom in the middle of the night and sits at the foot of the bed, near the chicken who may or may not be her husband, no words are required to compound the desolation contained in this tableau.

Like her Belgian counterpart at 23 quai du commerce, the wife of Feathers ultimately finds her meekness mutating into an act of violent empowerment. Here, a pillow and a kitchen knife are the keys to a kind of liberation, a diminishment of the hardships faced by those whom the patriarchy has cast as helpmeet.