Wheel of Fortune and Fantasy 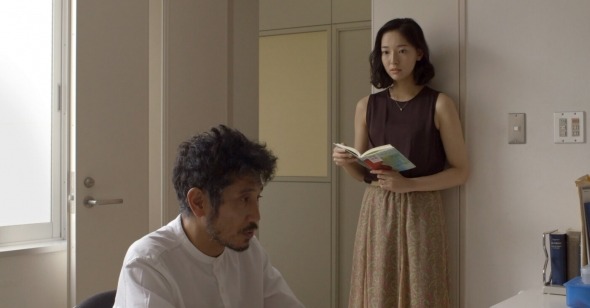 Wheel of Fortune and Fantasy is destined to be the less-remembered 2021 feature from Ryûsuke Hamaguchi, whose epic-scaled Drive My Car (also screening at this year’s New York Film Festival) received a screenplay prize at Cannes in July, accelerating the Japanese auteur’s ascendancy towards international stardom. Yet this anthology film, comprising three original “short stories,” each roughly 40 minutes in length and led by a female protagonist, bears no slightness or frivolity. Winner of the Grand Jury Prize at this past March’s virtual Berlin Film Festival, Wheel of Fortune and Fantasy exquisitely showcases Hamaguchi’s gift for homing in on moments of person-to-person contact and dilating its particular, hair-trigger tensions. Hamaguchi remains a filmmaker deeply and eagerly attuned to the minutiae and manifold meanings of human connection. He makes no great claims for his narratives nor strives for import in his dialogue-heavy writing. Instead, Hamaguchi leaves room for a viewer to meet his characters in media res during situations augmented by his keen eye for detail, his unidealized world-building, and his understanding that even the most ordinary life is a vessel of passion and pain and thus worthy of cinematic treatment.

These same qualities distinguished Hamaguchi’s previous film, the literary adaptation Asako I & II (2018), an enigmatic, indelible reinterpretation of the romantic comedy love triangle in which a besotted woman falls for a mild-mannered doppelgänger of her vanished first love. Hamaguchi’s nimble and nonchalant handle on potentially ludicrous material steadied this nearly unclassifiable creation in genuine human feeling. He is always on the ground with his characters—which is to say, among us—roving and probing through the slog of the day-to-day, chancing upon those who have altered our lives and those who simply have yet to.

Wheel of Fortune and Fantasy’s Japanese title, Gūzen to sōzō, translates in English to “Coincidence and imagination,” perhaps a more apt description of the fortuitous and lightly fanciful events that compose this triptych. Its first chapter, entitled “Magic (or Something Less Assuring),” begins with a lengthy, leisurely conversation in the backseat of a cab between a model named Meiko (Kotone Furukawa) and her best friend Tsugumi (Hyunri), who exhaustively relays a romantic, chaste first date with a burgeoning investor. Tsugumi is most touched by her prospective partner’s honesty, his willingness to open up to her about his last girlfriend, who cheated on him and broke his heart. Though Meiko appears good-natured throughout this debrief, wearing the bubbly and encouraging facade of an extraordinary dissembler, she’s really keeping an impenetrable lid over her spite and discomfort. After dropping Tsugumi off, Meiko decides to pay a surprise visit to her ex-boyfriend, Kazuaki (Ayumu Nakajima)—who just happens to be the dream date from Tsugumi’s story.

Here and elsewhere in the film, Hamaguchi dramatizes such revelatory twists with subdued, slinky craft, maintaining his characters’ poker faces before allowing them to drop a bomb that instantly and irrevocably bursts their bubbles of calm. What unfolds between Meiko and Kazuaki is a reunion of equals parts treachery and tenderness, during which the latter is given an ultimatum: choose between her, the deceitful woman he truly loves, or Tsugumi, a threat that comes to a climactic head a few days later when Meiko and Tsugumi run into Kazuaki while out to lunch. In a scene of unbearable, skintight tautness, Hamaguchi teasingly plays with our perceptions and our expectation of dramatic confrontation as a sudden and somewhat shaky zoom—tremendously jarring in a film composed, until this moment, of static and smooth tracking shots—punctuates the heartache that completely overcomes one of these characters.

Hamaguchi’s second episode, “Door Wide Open,” is the funniest, friskiest, and saddest, centered around Nao (Katsuko Mori), a promiscuous housewife finishing up her studies at a local university, where she is spurned by her younger classmates—save for one, the floppy-haired Sasaki (Shouma Kai), her covert and casually callous lover. Still bruising from failing a French class taught by Segawa (Kiyohiko Shibukawa), Sasaki enlists Nao in a plan to entrap their professor—currently the toast of Japanese society after receiving a prestigious literary prize for a novel—in a sexual harassment scandal. The story pivots on a risqué office-hours session, the fulcrum of which is a particularly dirty passage from Segawa’s novel about a protracted performance of transcendent fellatio, read aloud and in unrelenting depth by Nao for the presumed pleasure of the seemingly unimpeachable professor, a man of humble air and doleful, nearly dead eyes.

What begins as a comical feint at seduction, secretly recorded on Nao’s phone, evolves into something altogether stranger. Professor and pupil form a fleeting, mutually gratifying bond that proves erotic and enlivening for both characters, who will later be made to suffer the consequences for their meeting when one of them commits a single, thoughtless error, its residue clouding Nao’s expression years after the fact. The pleasure of the extended interaction between Nao and Segawa that precedes their downfall comes from Hamaguchi’s cunning craftsmanship, which centralizes his actors in to-camera reverse shots and insinuating long takes that allow the nuances of this new connection—a blush on Kai’s face, a flame of elation that thaws Shibukawa’s icy stare—to rise to the surface, unimpeded by cuts. Holding his performers in close-ups of delicately blooming emotion, he conjures a new form of intimacy unable to be classified or contained.

This same intimacy arises in the film’s final section, “Once Again,” which, unlike the chapters that preceded it, was shot during the COVID-19 pandemic. A scrolling title-card informs us at the outset that this narrative is set in what is arguably purgatory or paradise, a world in which a global virus has leaked everyone’s personal correspondences so that digital communication has ceased to exist, driving all of society blessedly offline. Our main character here is the butch-adjacent Moka (Fusako Urabe), a Tokyo-based, understandably out-of-work IT specialist who returns to her hometown of Sendai for a 20-year high school reunion, hoping to cross paths with a classmate who never shows up. The next day, while riding the escalator at the train station, Moka locks eyes with Nana (Aoba Kawai), believing her to be the longed-for companion from her past. Nana, too, recognizes Moka, and invites her back to the house where she plays homemaker to a husband and two adolescent children. Playing catch-up with the woman she believes to be the teenage girlfriend who left her for the sick, boring life of heterosexuality, Moka becomes exasperated with Nana’s presumed evasiveness. Turns out, Nana is not the classmate from 20 years ago, nor is Moka the classmate Nana believed her to be.

This case of mistaken identity might have been treated as a cruelly amusing twist of fate. Instead, Hamaguchi allows the scenario to progress as Moka and Nana become the ghosts that obsess them and say all that they wish they could say. Predicated on make-believe, this role-playing experiment produces real, cathartic emotion, no matter its “falseness.” As his tremendously affecting actresses face each other head-on, clasping hands and cradling one another in their focused gazes, Hamaguchi crystallizes a truth that has dissipated in the past year and a half, which is that a spiritual connection with a person with whom we’ve simply shared space and perhaps only a handful of words can be just as nourishing and transformative, as rooted in the wandering mind, as the bond shared with the love of one’s life.

I remain haunted by a moment from Asako I & II, an anguished outburst by Rio Yamashita’s Maya, a ceaselessly supportive friend to the titular protagonist. As a taxi carries away Asako’s jilted love, Ryohei, to a new home in a faraway city, the married and heavily pregnant Maya runs after Ryohei’s cab, calling his name, before collapsing in tears, her drastic action forcing us to reconsider the character and the place where her heart truly resides. Through Maya and the friends, lovers, and strangers who drift in and out of Wheel of Fortune and Fantasy, Hamaguchi wonders if we can ever really know the extent of a connection or the hunger for one when considering another individual from the outside.

In Wheel of Fortune and Fantasy, life is presented as a giant, tragicomic game of chance that requires all but its most privileged players to sacrifice and suppress their deepest desires, remaining mysteries even to those who know them best. Hamaguchi reveals the chaos that exists beneath the human face, a chaos never to be eradicated but perhaps alleviated for a spell when someone, sometimes anyone, reaches out to rescue us from ourselves with the gift of their attention.