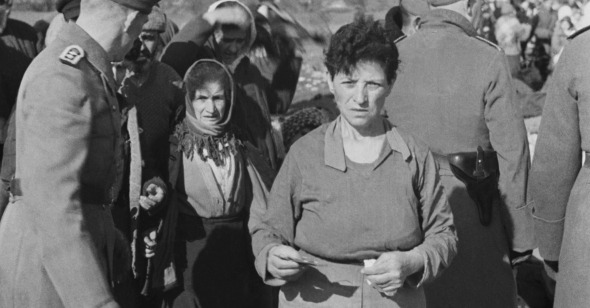 Babi Yar. Context plays at Museum of the Moving Image as part of First Look 2022 on March 20.

In a January 2022 essay for the London Review of Books, James Meek refers to the evolution of satellite photography, writing that it once belonged to the private realm of military intelligence but has now entered the public sphere. He uses the example of Maxar Technologies, a U.S. company which, in November of last year, released photographs of Russian soldiers, tanks, and trucks parked near Yelnya, a small town just to the east of Belarus and just to the north of Ukraine. Their presence was an implicit threat, the photographs a kind of evidence of things to come. Responding to the images, Meek asks whether an invasion might be imminent.

Babi Yar. Context is a film built entirely of “evidential” images. Those familiar with Sergei Loznitsa’s work will quickly recognize it as one of his archival documentaries (State Funeral, The Trial), distinct from his other documentaries (Austerlitz, Maidan) and features (Donbass, A Gentle Creature). Loznitsa is a master of this mode, stringing together artifactual images into narratives both micro- and macrocosmic. Here, he takes footage filmed by German soldiers, Soviet officials, and journalists, in combination with still photography and other archival materials, and pieces together the story of Germany’s invasion and occupation of Ukraine in 1941. The film is centered on the Babi Yar massacre, during which, over a two-day period, approximately 33,771 Jews were slaughtered in a ravine on the outskirts of Kyiv.

What is immediately telling about Babi Yar. Context is its name. “Context” is a curious term to employ. It proposes something like the truth, a gesture toward what happened. “The knowledge of history is the best-known defense against chronocide,” Loznitsa claims in an interview. These evidential images of soldiers and civilians, Nazis and Jews, provide a midpoint between knowledge and history—between a subjective and objective truth. This is the framework for Loznitsa’s archival cinema: a kind of foundation on which we can build a better understanding of the world.

Context and evidence play a vital role in that world, one increasingly composed of images. In Meek’s essay on the latest invasion of Ukraine, he compares satellite photography to that of paparazzi—scandalous images which nevertheless hold the utility of truth. The proliferation of paparazzi imagery might be seen as a natural outgrowth of spy games, a kind of Cold War paranoia in which we all keep tabs on our neighbors. Only now, such espionage takes much less effort. It has long been true that people willingly offer up images of their lives under the false auspices of community and connection. Voyeurism has turned back on itself. The perspective of a life—that spying game—is now performed by the subjects themselves.

These highly personal images, typically filmed on phones and distributed through social media, have become the format of our immediate history. (And equally, Babi Yar. Context would not be possible without its dutiful Nazi paparazzo and their new, lightweight cameras.) But this pervasive cinematosphere is nevertheless dismissed as something unserious—despite the fact that the truth claims of images and their immediate mediation have become essential forms of evidence in global politics today.

It is perhaps distasteful to call certain things “cinema”—whether that’s footage of the Holocaust, police violence, or the war in Ukraine. This is likely because the medium connotes a kind of entertainment. In his essay “Subject Positions, Speaking Positions,” Thomas Elsaesser writes, “The film experience is, par excellence, a site of mimetic emotions. Its ambiguous, libidinally charged play of identifications is therefore responding to a ‘melodramatic’ interpretation more obviously than a ‘modernist’ hermeneutics. Cinema, in this respect, is on the side of the excessive, perverse, or compulsive, rather than ruled by an aesthetics of detachment and distance.” Elsaesser uses the example of Claude Lanzmann’s Shoah, what he calls a “limit case,” arguing that, even then, the film is still “committed to a rhetoric of pathos, irony, and affect.” Cinema, like mimesis, is duplicitous; it occupies dual temporalities of now and then. The process of watching a film inevitably recreates that moment within our very soul; we become the site of its happening. To witness the murder of George Floyd—or, as with Shoah and Babi Yar. Context, the extermination of the Jews—is to incur some complicity through emotional response.

The question Elsaesser addresses is one of representation. He describes the philosophical dilemma as being riven between absolute literalness and “the fear that such literalness might itself be merely a mode of representation.” Despite Babi Yar. Context’s total adhesion to actuality—these images are crystalized referents; we can state unequivocally that this happened—it nevertheless incurs conventional narrative emplotments in its unfolding: close-ups create character, action provokes affect, chronology becomes narrative, and so on.

The Holocaust is meant to stand in singularity as unrepresentable. The camps were an ontological rupture. Jean-François Lyotard compared Auschwitz to “an earthquake [that] destroys not only lives, buildings, and objects but also the instruments used to measure earthquakes.” Babi Yar. Context doesn’t show the killings, of course. If the Nazis were willing to dig up tens of thousands of recently buried corpses just to incinerate them on pyres, they would of course extinguish any other evidence of their crimes. What Loznitsa shows instead is absence, articulated through that uniquely cinematic device, the cut: Jews are herded, stripped, beaten; and then suddenly the Jews have vanished. We see the ravine—itself an absence, a grave, a non-place—filled only with clothes. In a procession of color photographs, we see pink mittens and paisley scarves, ochre cardigans and fur coats, patterns of zigzags and stripes, photographs and diaries strewn about, a prosthetic leg. The images are a powerful counterpoint to the frequently cited pile of shoes at Auschwitz, which, in its uniformity, provokes a sense of unknowability, of a mass, of the unfathomable six million. In each pile of clothes at Babi Yar, we see an individual. It follows Loznitsa’s philosophy of history as that which comprises finite specificities. One merely has to do the work of uncovering these specificities piece by piece, frame by frame, shoe by shoe.

Or perhaps the truth is meant to be something we sense but never see, like a ghost. Toward the end of Babi Yar. Context, Loznitsa uses footage taken from the witness statement of Professor Vladimir Mikhailovich Artobolevsky on January 24, 1946. He speaks into a microphone surrounded by those who would bear witness to his witness—some merely listening, others writing down his every word. This is the moment of record, of history-making. Artobolevsky describes his encounter with an old woman, “her miserably thin arms raised to the sky” as she cries out in Yiddish. “Her entire body expressed such a terror, such extreme despair, that it is hard to imagine such a degree of human suffering. One cannot explain it with words. It cannot be told.” But before one can conclude that Loznitsa is now working against interpretation, against a knowable history, the man continues: “Perhaps only a talented sculptor could capture her figure and her expression.”

The scene introduces two other avenues of exploration. First, there is the alternative truth of testimony; second, the alternative truth of art. Such a sculpture would not be the exact woman, nor her exact expression. But Artobolevsky argues for a facsimile so perfect that it provokes in the observer the exact same experience he encountered in seeing and hearing the woman scream. Does such perfect art exist? Testimony, in the scholarship of history and trauma, has become an artform all its own, something beyond truth but gesturing toward it much like Artobolevsky’s hypothetical sculpture. Note that Artobolevsky sculpts his own statue: his description of the woman and her “miserably thin arms” must be taken as fact, as a kind of historical object. We envision the woman in our mind and in doing so invite form and narrative into our cognitive reality (our only reality). Would it matter if Artobolevsky was misremembering? Does not his sculpture already provoke the intended consequences of that perfect artwork he alludes to? “One cannot explain it with words,” he says, all the while conjuring this eidolon in our mind’s eye.

In his book Writing History, Writing Trauma, Dominick LaCapra tells the story of a woman interviewed on behalf of Yale’s Video Archive for Holocaust Testimonies. She witnessed the Auschwitz uprising and recounts her version of events: “All of a sudden,” she claims, “we saw four chimneys going up in flames, exploding.” LaCapra then reveals that, as a matter of historical fact, only one chimney was blown up, not four. Does this discredit her testimony? One psychoanalyst who had conducted some of the woman’s interviews intervenes: “The woman was testifying not to the number of chimneys blown up, but to something else, more radical, more crucial: the reality of an unimaginable occurrence.” The Auschwitz uprising was one impossibility within another: the unthinkable rejection of an unthinkable reality. “She testified to the breakage of a framework. That was historical truth.”

Testimony—which we now understand to exist, like art and archive, within a symbolic realm—proves comforting for its displacement of reality. Not a displacement of historical truth, not as something inaccurate, but rather: in the way in which it provides distance from the event. (If cinema is a medium of now and then, it at least also signifies a separation between the two.) In another of Loznitsa’s films, Austerlitz, we see footage of the camps today. They teem with tourists; it is strange, painful viewing. One symbol Loznitsa lingers on is the well-known inscription above the camp’s entryway: “Arbeit Macht Frei,” Work sets you free.

The gate represents one of the many ways in which the camps have been reconstituted to align with the semantics of memory (narrative) rather than reality (actuality). While the gate may demarcate, in the story of Auschwitz, a threshold between humanity and not, the entryway to hell or terra nullius, it was not a central fixture in the experience of most Jews—few deported to Auschwitz ever saw it. Similarly, Deborah Dwork and Robert Jan van Pel note, when visiting Auschwitz today, “A misconstruction of history begins right in the parking lot: visitors think they have arrived at the periphery of Auschwitz I; in fact, they are already in the middle of the camp as it existed in 1945.” Further still, the ruins of the crematories were located in Birkenau, not Auschwitz, but the architects of the reconstruction favored a narrative journey that ended at the site of extinction, and thus decided to “recreate” a chimney at the endpoint.

Do any of these decisions constitute a “historical truth”? Unlike testimony, a memory that unwillingly falters, these are artistic choices. They represent a search for language that steers dangerously close to transgression. The allure of the gate is obvious: it rhymes neatly with Dante’s inscription over the gates of hell (Abandon all hope, ye who enter here), and it is much simpler to occupy some symbolic hell than the reality of Auschwitz.

The horror of extermination may truly be unrepresentable in that it is constituted only by death. This is an “endpoint” the architects cannot offer. Loznitsa perhaps comes closest to representing extermination by refusing to do so, through his use of absence and omission. (The name of his production company, ATOMS & VOID, draws the distinction between life and death, something and nothing.) Evil is not banal but sublime. What Arendt reveals is that such banality only occurs in our observance of the act itself, in our stock-taking and list-making, in our building museums and rebuilding camps. This is the banal work of remembrance, to which Loznitsa is fully committed. But I would not call his film banal. I would simply call it context.