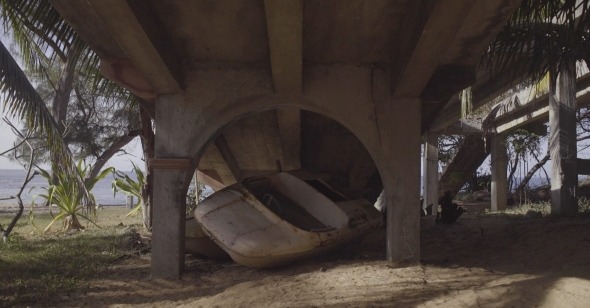 “If you want to, you can close your eyes for a while, and just listen to the sound.” Carolina Fusilier’s introduction to her first feature film, The Still Side, co-directed with Miko Revereza, at an early Saturday morning screening at the 2022 True/False Film Fest was not only a welcome invitation to nonfiction audiences tuckered out after two full days of screenings capped by late-night carousing—it was also a helpful guide for viewing. The film, composed of locked-off shots taken in and around a long defunct resort on an island off Mexico’s Pacific coast, is draped with a lush soundtrack of natural ambience occasionally punctuated by ghostly voices, filtered as if through a loudspeaker, announcing upcoming attractions at the resort’s closed water or zoological parks, and similarly spectral conversations held between Fusilier and Revereza (director of the beguiling pandemic release No Data Plan) that ramble across various cosmic topics including the mythical Filipino merfolk, the Siyokoy. The Still Side is an enveloping miniature, and though I didn’t take Fusilier up on her invitation, I can imagine closing my eyes occasionally might not hurt the experience. No image here is prioritized over another, and the film advances leisurely, over time, through consistency of visual approach and smartly placed soundtrack intrusions. Though, if I had closed my eyes for a bit, I might have missed those few shots in which, through the magic of digital trickery, the Siyokoy (or at least its shadow) seemed to have joined the filmmakers for a spell.

A pleasing sense of ambient drift marked a number of the landscape-focused True/False features I saw, a welcome respite from the “story” and character-obsessed rigidity that hobbles the American commercial documentary industry. It’s tempting to connect the dots between this strand of filmmaking to the resurgence in interest in ambient music and what that might suggest about the collective mental state of humanity; certainly there’s much that could be read into our desires and needs to escape the world at large in favor of inward-reflection, meditation, and other varieties of self-care. Are landscape-based films ambient? Could we conceive of a broader filmic practice (outside of the avant-garde) that exists at the intersection of nonfiction inquest, meditation apps, and, say, the Yule Log on demand? Even if not ambient in the same fashion as The Still Side, there was a pleasing sense of quiet and space to many T/F films—from Riotsville, USA, to I Didn’t See You There to Sergei Loznitsa’s massive Mr. Landsbergis, perhaps the most becalmed movie documenting a pivotal political revolution that I can immediately recall.

Not long after watching The Still Side, I found myself back in Columbia, MO’s Ragtag Cinema, the festival’s flagship venue, as well-worn and comfortable as aged house slippers, for a screening of Karim Kassem’s Octopus, another tripod-bound work. Kassem had arrived back in his home of Beirut to prep another film of the same title, but he had the misfortune to time his return to the day prior to the massive 2020 blast that rocked the city’s port, killing several hundred, and leaving upwards of 300,000 homeless. The filmmaker switched course, improvising a new filmthat attempts to obliquely document the aftermath. His approach begins promisingly with highly formal mediums and close-ups of faces; all his subjects seem in some stage of mourning or yearning for further news related to the blast. After this opening act, the film moves outside and takes in some of the devastation; the camera returns several times to a single wooden door, fashioned outside of the city and marked with an Octopus stamp, and its travel towards eventual use in the reconstruction. At least, that’s how I read the progression of Octopus. While I appreciated Kassem’s tact in the wake of devastation, and that he avoids any impulse to ambulance-chase the tragedy with his camera, there are times when Octopus felt perhaps too oblique, too far removed from its structuring absence, even as its visuals of the city remain compelling throughout.

Nastia Korkia’s Ges-2, about the refurbishment of a massive energy plant outside of Moscow into a world-class art space (think: Russian MASS MoCA), also operates in a similarly hands-off register, with the camera often at a remove from the action and no obvious “characters” to follow throughout (some members of the museum’s staff as well at its chief architect, Renzo Piano, appear intermittently). Korkia opens boldly with a subtitle declaring the film would be achronological and comprise “Nine Chapters, Three Appendixes, and One Karaoke.” Yet, at the film’s beginning, Ges-2 is a husk waiting to be gutted, and by the film’s end, it is ready to receive visitors. I found myself puzzling over the chronology and where the breaks in each chapter were—the three appendices are boldly marked in text cards, so why not the chapters as well? Perhaps these quibbles suggest more about my particular viewing habits and desires than any flaw in the filmmaker’s strategy, which is to collect a variety of different moments in the rebirth of Ges-2 and string them together without connection or implications of causality. Korkia certainly knew how to handle one of the best, most hilarious scenes in any film I saw at T/F: in a cramped office space preserved from the museum’s previous life, the new curators have hung a rare Kandinsky; watching over the painting is a comically buff security guard. Patrons are ushered into the room one or two at a time and more than a few are surprised and confused by this man, their close proximity to him, and his unexpected thoughts on the painting. At its sharpest, Ges-2 reminds of Sophie Fiennes’s masterful document of another unorthodox art space, Over Your Cities Grass Will Grow, but the structuring device remains elusive.

Paweł Łoziński’s The Balcony Movie, perhaps my favorite film of the festival, also operates without a narrative arc, characters, or story that needs to be resolved. Łoziński’s proposition is simple: he stages a camera on his balcony overlooking the sidewalk in front of his Warsaw apartment and accosts passerby, attempting to convince them to stop and interact with him for a few minutes. Over months of filmmaking, some of his neighbors take time to speak with him, some don’t, others recur and provide limited updates on their lives. The seasons change. Through smart structuring, Łoziński is able to build and break momentum, create humor and pathos and, ultimately, craft a work that approaches a nondefinitive state of Poland today. He does so much with so little—essentially one camera angle (with slight variations), a few microphones and a curiosity about the human condition—that it makes the heaving lengths many contemporary nonfiction films go through to convince of their value almost laughable. Who needs story when you’re attentive to life, to sensations, to moments, to how something looked or felt—namely, those things documentary film has always been most adept at highlighting?