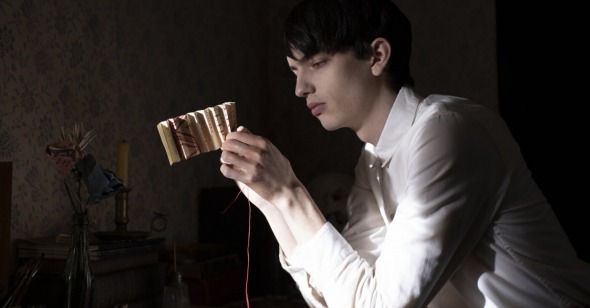 As this year’s Toronto International Film Festival returned, at least in part, to in-person screenings, several films on view continued to reckon—indirectly or otherwise, and to varying degrees of success—with our era of disrupted intimacy and heightened loneliness. Inevitably, the relationships on-screen seemed to turn a mirror to this moment, although these core human fumblings and frustrations have been there all along. Some of the films that most lingered in my mind were ghost stories. Haya Waseem’s arresting debut feature Quickening translates a young woman’s coming-of-age into an eerie, sci-fi-esque reverie. As she nears the end of her first year at university, Sheila (Arooj Azeem), a Pakistani-Canadian performing arts student, falls in love and has sex for the first time. But just as abruptly her world begins to unravel: her would-be suitor suddenly ends their dalliance; her parents’ marriage crumbles amid financial troubles; and she suspects she may be pregnant. Although it never veers fully into the supernatural, the film bears traces of Joachim Trier’s Thelma (2017) and Luca Guadagnino’s Suspiria (2018), equally shadowy films where the female corporeal might be tapped to harness devastating power. Here, the body reveals a haunting.

Sheila is the daughter of immigrants (played in the film by Azeem’s real mother and father), and her anxieties are incisively expressed not as warring ideologies between what are so often reductively deemed conservative and progressive cultures—for “freedom” is not uncomplicated here—but as a possession, a ghost trapped in the limbs, refusing to be suppressed. In that way, it seems natural that Waseem would render this ordeal in the language of horror: the ominous score, evocative sound design, and in particular Christopher Lew’s elegiac cinematography, with its uncanny, slow-moving pans and tilted angles, all uniquely capture Sheila’s building sense of displacement. Quickening amounts to an insightful, poetic portrait of a first-generation experience.

Stephen Karam’s The Humans, an adaptation of his Tony-winning play, operates in a similar vein, infecting an otherwise conventional family melodrama with horror elements. At the new home of young, unmarried couple Brigid (Beanie Feldstein) and Richard (Steven Yeun), Brigid’s family gathers for Thanksgiving dinner: her older sister, Aimee (Amy Schumer); their parents Erik (Richard Jenkins) and Deirdre (Jayne Houdyshell); and Erik’s mother Momo (June Squibb). All too familiar family tensions and resentments arise as the evening wears on. It turns out the deeply religious Erik and Deirdre don’t fully approve of these out-of-wedlock living arrangements, nor what they perceive to be Brigid’s unrealistic career aspirations. In fact, the general disconnect between the parents and their grown daughters becomes the source of several bitter exchanges. Apart from Momo, in the latter stages of dementia, they can all be casually and piercingly cruel to each other, followed by clumsy apologies or—as also often happens in families—no real atonement at all as the conversation barrels on to the next topic. And of course, there are secrets and long unspoken traumas that burst awkwardly out of this prolonged, forced proximity.

Lol Crawley’s camera creeps over the ceilings and aged piping along the empty halls of the prewar Chinatown duplex, as yet largely unfurnished. But for all its sparseness, the space begins to feel increasingly oppressive and claustrophobic. Lights keep going out so that by the end of the night, they are almost entirely shrouded in darkness. But already a sense of foreboding loomed over the holiday proceedings: Richard and Erik share their strange nightmares, and there is mysterious thudding from upstairs. The house is haunted by the lurking shadow of mortality, vividly captured in its final scene, masterfully executed by Jenkins. Predictably, given the cast, the film is brimming with wonderful performances, from Jenkins and most notably Houdyshell, but Schumer, too, is surprisingly effective, and the always welcome Yeun communicates multitudes with just a glance.

Jane Campion’s long-anticipated return to the big screen after twelve years already earned her a Silver Lion for Best Director at Venice. Her adaptation of the Thomas Savage novel The Power of the Dog, a delicious trickster parable of patriarchal comeuppance, replete with Ari Wegner’s striking cinematography, also boasts one of the year’s most exciting—if inconsistently harnessed—ensembles. Campion’s native New Zealand stands in for 1920s Montana, where the bachelors’ homestead of the wealthy Burbank brothers is upended by an unassuming young widow and her teenaged son. The two brothers are fantastically different: the ornery, all-around repugnant Phil (Benedict Cumberbatch) spews misogynistic and, as it turns out, revealingly homophobic ideals of manhood and fraternity. George (Jesse Plemmons) is the quieter, simpler man and wears his loneliness much more transparently. When George suddenly marries the soft-spoken Rose (Kirsten Dunst) and brings her to live at the Burbank estate, Phil makes it his mission to torment her. He viciously homes in on her son, Pete (the remarkable Kodi Smit-McPhee), a shy, spindly boy who talks with a lisp and slowly proves himself to be something of an enigma. He is, much to Phil’s chagrin, drawn to more “delicate” things, like flowers and late-night hula hooping, but he also possesses a curiously unflinching attitude to the grimmer aspects of ranch life. Phil abruptly takes the teenager under his wing and begins to replicate a dynamic that he once enjoyed with his beloved, now dead mentor Bronco Henry, whose shadow looms over the tale.

Despite an economical plot, the film unfurls into an unexpectedly rich and meticulous meditation on patriarchal fantasies of power, a grand masquerade, the film posits, or else a vapid idyll stitched out of nothing more than hubris and fear. The Yale-educated Phil, with all his wealth and charm, is merely playing cowboy and fails to appreciate any strength that does not suit the archetypal masculinity he so desperately clings to. Cumberbatch delivers his best performance yet, but it’s former child actor Smit-McPhee who gives a frankly mesmerizing portrayal of the mysterious young Pete and, in quite a few moments, steals the scenes right from up under his castmates. Unfortunately, Plemmons and Dunst get much less to do, although they strike, as usual, memorable impressions. Dunst is especially sympathetic as a woman withering under her brother-in-law’s cruelty and the expectations of her lofty new class. In one sequence, she delivers a cheeky line that—intentional or not—invokes her breakthrough role in Interview with a Vampire (1994): “You’re not to kill them in the house, Peter.” But Peter is not nearly so squeamish.