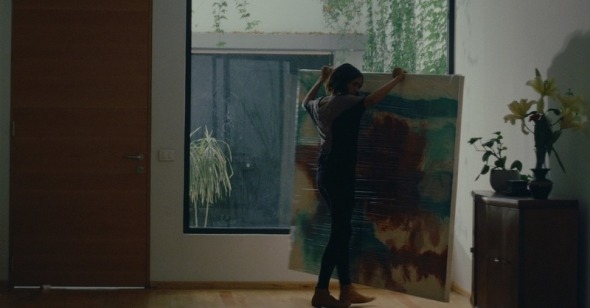 The Toronto International Film Festival’s Wavelengths program remains an essential overview of the goings-on in contemporary experimental cinema. Like most everything else in this year of the everlasting storm, however, the 2021 edition was significantly pared down: just six features and one shorts program (in comparison to the respective twelve and four in 2019). But without suggesting that such curtailment is at all desirable, it can be said that the year’s single shorts showcase, meaningfully titled “Present, Tense,” affirmed the vitality and necessity of Wavelengths as a whole.

The program’s title, which lead curator Andréa Picard described as being “for a tense present,” was in fact inspired by Michael Robinson’s Polycephaly in D, in which two telepaths, separated by mysterious circumstances, converse (in subtitles) about a shared past experience, one of them reminding the other to narrate in the present tense. In a series of movements punctuated by the telepaths’ exchanges, Robinson treats the Internet’s vast, ever-expanding archive of moving images as a kind of world-memory, conveying a sense of impending apocalypse through a deluge of propulsively edited imagery. In both its use of found footage and fixation on scenes of calamity and disaster, Polycephaly bears comparison to Artavazd Peleshian’s recent Nature (2020), though the catholicity of Robinson’s raw materials—which range from the end of The 400 Blows (1959) to Lil Nas X sliding down a stripper pole to hell—has more in common with the Guy Maddin of The Green Fog (2017). (One standout sequence giddily cuts between multiple iterations of King Kong, Jennifer Lawrence in The Hunger Games, and Michael Douglas in Romancing the Stone.) What gradually emerges from this roiling cascade of garish imagery—which extends Robinson’s investigations with the detritus of pop culture, while approximating the surreal collisions of everyday doomscrolling—is the terror of being caught in an eternal, undifferentiated present. But as in Onward Lossless Follows (2017), there is in Polycephaly the humorous release of realizing the contingency of a debased present-tense view. In the film’s flashes of illumination, we realize that even amid the flood, we are capable of seeing otherwise.

Where Robinson’s film relies on intentionally jarring transitions, Nicolás Pereda’s Dear Chantal (pictured above) operates on a far more mellifluous register. A hushed, elegiac (and presumably fictional) epistolary, it presents images of Pereda’s sister, Catalina, organizing her two-bedroom apartment in Coyoacan, alongside his narrated letters to Chantal Akerman regarding her interest in renting the place short-term. In one letter, Nicolás speaks of how his sister, a painter, prefers not to engage in the “extraordinary game” of cinema because it impedes her vision, “putting a uniform on an eye that is otherwise naked.” He does not comment on this statement directly, but in its acute attentiveness to space, gesture, and tone, Dear Chantal demonstrates that such judgments are ultimately relative. There is no absolute value to an image. And like the spaces in which we live and work, cinema’s capacity to expand our vision is, in the end, only as good as the contexts we are able to create for it.

In Inner Outer Space, Laida Lertxundi takes a different angle on one’s relationship to one’s environment. Its pre-title segment offers a play on the structural film: a set of images rotate in and out of three possible positions on a cardboard diorama. Significantly, though, the emphasis is thrown not on the relationship between individual permutations of the images, but on the figure of a woman whom we see make (apparently superfluous) adjustments to the set-up—which is the kind of footage that a “proper” structural film would omit, emphasizing a unified pattern over the flux of life and its sundry accidents. Later, we see a pair of women open a folder containing some of the photographs we have just seen. As they go through them, we occasionally cut to footage of the images being captured. The organization of personal experience soon emerges as the film’s primary subject.

Like T. S. Eliot, whose The Dry Salvages provided the title for her 2014 We Had the Experience but Missed the Meaning, Lertxundi is continually preoccupied with the space between experience and knowledge. Thus, throughout Inner Outer Space we are presented with various “real” situations and corresponding representations of them: the aforementioned diorama and photographs, various film clips, a child’s rendering of a landscape. What we are effectively asked to consider is the relationship between lived experience and an imaginative reconstruction of it, a consideration that culminates with what is, by now, a recognizable motif of Lertxundi’s cinema: a scene of filmed projection. Here, to the sounds of Complex’s “Am I,” we see two women in front of a wall of ocean waves, “diving in” and otherwise immersing themselves in the water. A lyrical burst of feeling, the scene is as Romantic a passage as the Wavelengths program contained, for it affirms the creative act of the imagination unbound by notions of indexical representation, and art (or encounters with it) as the only possible unification of inner and outer space.

In both Lertxundi’s and Robinson’s films, the voice of the filmmaker recedes into the structure of the work, while in Dear Chantal, Pereda is not so much heard as overheard. Two other selections by contrast, Minjung Kim’s “The red filter is withdrawn.” and Vika Kirchenbauer’s The Capacity for Adequate Anger, operate as mimeses of direct address. In Kim’s twelve-minute short, the 1968 text of Hollis Frampton’s “A Lecture” is presented (in Korean and English subtitles) over images of South Korea’s Jeju Island. The dominant motif throughout is that of the rectangle: while Frampton speaks of a rectangle of white light that is “all films,” every image being created by a “removal” of color (e.g., via a red filter, which screens out blue and green), Kim’s compositions are doubly “framed,” with myriad shots foregrounding the region’s cave and tunnel fortifications. The shape of the rectangle, which also recalls the cinema screen, thus becomes associated with metaphors of subtraction and negation—and only more so when Kim finally presents images of gravestones, a metonym for death and an entire history of Korean military action. Given all this, it would be naive to deny the mournful, sobering aspect of Kim’s cinematic excavations. But the analogy to the theater screen also points to something else: by explicitly linking death to the “negative” power that creates a film image, “The red filter is withdrawn.” also suggests that our bodily limitation is what allows our experience to be more than just white light, what allows us to have any kind of experience to begin with. It suggests, quite rightly, that it is only in the finitude of our frames that we are able to comprehend the world at all.

Unlike Kim’s film, which uses no voiceover whatsoever, Kirchenbauer’s The Capacity for Adequate Anger makes deliberate, effective use of not just textual address but also the rhythms and intonations of actual speech. Narrating in deliberately controlled monotone, Kirchenbauer reflects on her childhood memories, her insecurities and successes as an artist, her queerness, as well as her evolving relationship to art institutions. Per her own self-deprecating description, the film is a kind of autobiographical “slideshow”—though what emerges, through all its rhythmic recurrences and audiovisual repetitions, is a semiotics of the artist’s pose. There is a marked physical aspect to this, which she conveys in a number of anecdotes: her tendency as a youngster to pose like Freddie Mercury; memories of schoolchildren joking about her giving them AIDS; a visit to a dentist who asks whether she is HIV positive. But there is a significant rhetorical dimension, too, founded in Kirchenbauer’s self-reflexive examination of the structures of power involved in the making and exhibition of her film. (Prompted by “The red filter is withdrawn.”, one might recall Frampton’s famous 1973 letter to Donald Richie regarding a proposed retrospective at the Museum of Modern Art, and his rightful anger regarding the unrecognized labor and costs of artistic production.) Seen in this light, the title of Kirchenbauer’s film refers both to the artist and her audience. It asks, finally, what conditions would be too much for either to accept.

In the case of earthearthearth and Train Again, the only two films in the program to screen on 35mm, such conditions would be, in a more immediate sense, ineluctably material. The former, Daïchi Saïto’s follow-up to Engram of Returning (2015), and his second collaboration with saxophonist Jason Sharp, transforms Chile’s Atacama Desert into precisely composed fields of shape and color. Alongside Sharp’s sonic experiments with his own heartbeat, earthearthearth uses a range of film stocks and visual effects to achieve a purity of rhythm and hypnotic abstraction. But if the film’s deliberate repetitions do not quite sustain its half-hour runtime, it nonetheless presents the viewer with a kind of sublime, otherworldly terror not unlike that of 2001’s Beyond the Infinite sequence.

Terrifying and exhilarating in equal measure, Austrian filmmaker Peter Tscherkassky’s Train Again effectively collapses the (vehicular) history of cinema onto itself in dense, overlapping, materialist vortices of movement. A breathless work of relentless rhythm, it summons up everything from the Lumière brothers to Kubrick’s The Shining (1980), using rapid montage and graphic matches to link—again and again—the visual film strip with the sight of trains going off the rails. The title is a reference to Kurt Kren’s 1978 film 37/78 Tree Again, though I thought most often of the 1971 Paul Sharits film S:TREAM:S:S:ECTION:S:ECTION:S:S:ECTIONED for its overlapping “streams” of movement, witty plays with directionality, and the desire it creates in the viewer to get a look at the physical film strip afterwards. And if Train Again was an apt end to the program, not to mention one of the most kinesthetically exciting films of the entire festival, this is because it suggests that an (ontological) engagement with a medium’s past is a necessary step in assuring its future.

To return to Frampton one final time: in “A Lecture,” he remarks, “We learned long ago to see our rectangle.” The emphasis here is crucial, for it suggests that a medium is only as vital as our critical capacity to engage with it. However an image gets on the screen in front of us, technologically speaking, we nonetheless see things not with the light of the projector, but with, as it were, the Promethean fire within. The title of Tscherkassky’s film, like the Wavelengths program as a whole, resounds as a kind of exhortation. For if we learned long ago to see our rectangle, our response to it is not at all fixed; we have the capacity to see anew. And in the darkness of the theater, we can train, and train again.