Cannes 2021 Dispatch: The Art of Desire 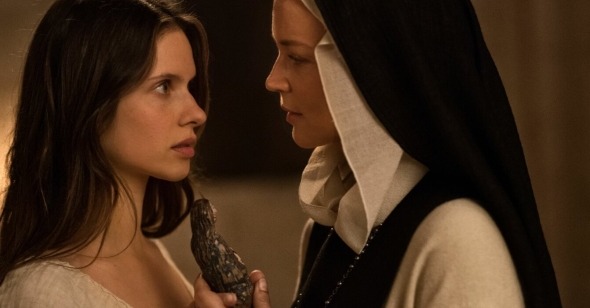 Cannes 2021 Dispatch:
The Art of Desire
By Sarah Fonseca

The question of sex in cinema has been on the minds of many an American moviegoer in recent years, in large part because it is hard to find. Reporting from Playboy in 2019, critic Kate Hagen annotated that just over than 1% of the “148,012 feature-length films released globally since 2010 contain depictions of sex.” Fortunately, in critical dispatches from this year’s Festival de Cannes, this very quality has been breathlessly emphasized: passion and physical intimacy made an unapologetic return to the screen. From Benedetta’s fire-and-brimstone affair to Anaïs in Love’s beachside romp, passion and its erotic trappings have been hard to avoid on the Croisette.

Such carnal images serve a purpose: they have the power to illuminate and underscore religious hypocrisy, the pleasures and perils of childbirth, and unreciprocated love, and they can even permit, as in the case of competition entry Bergman Island, the spectator to time-travel between history and fiction. When well-executed, a thoughtful romp can say as much, or more, than pages of dialogue.

Charline Bourgeois-Tacquet’s first feature Anaïs in Love (Les Amours d'Anaïs) is a film that prioritizes body language. Preciously booksmart, ambivalent to adult responsibility, and charming beyond comprehension, Parisienne Anaïs (Anaïs Demoustier) yearns for a love life that rivals the great affairs of the 17th century texts with which her PhD thesis is preoccupied. Thus, she runs circles around herself, incensing her boyfriend by ending a pregnancy (after she forgets to take her birth control), and baffling her more mature paramour Daniel (Denis Podalydès) by rebuffing him sexually, noting that lovemaking makes her anxious.

As a romantic comedy, Bourgeois-Tacquet's film is dependent upon a crescendo of chance collisions, each more provocative than the last. The same is true for love; it’s human nature to crave such intensity, despite the amorous conservatism that comes with age. Love is often found in proximity to trouble. While reading up on Daniel’s wife of many years, an author in her fifties named Emilie (Valeria Bruni Tedeschi), Anaïs finds herself blown away by the older woman’s ideas and craft. She is quick to shirk her interpersonal and professional responsibilities to seek out Emilie for intellectual companionship, going so far as to take a job at a provincial hotel where the esteemed author is in residence for a writing conference.

From the perspective of the parched American queer film critic, what transpires in the countryside is enrapturing—not because it is undeniably homoerotic, but also because it is allowed to unfurl with conversations absent intellectual pretension and without the queer introspection and label-ascribing that burdens many newer films under the queer and feminist cinema banners. Instead, Bourgeois-Tacquet allows her young heroine a symbiotic chance encounter with a kindred spirit. Thirty years Anaïs’s senior, Emilie, initially reserved around her new self-proclaimed protégé, soon finds the solutions to her own creative blocks between Emilie’s ears (and elsewhere). The freckle-faced Demoustier has played the ingénue for Robert Guédiguian, François Ozon, and Nicolas Pariser, but here she gives her most captivating performance to date.

Though the film was delayed for several years, Benedetta’s Black Death setting is uncannily suited for the intrapandemic era. Adapted by Paul Verhoeven from a recondite sexuality studies text by feminist scholar Judith C. Brown, the veteran director’s seventeenth feature, like a number of its precursors (Elle, Black Book, and Showgirls among them), testifies to the tenacity, prowess, and castigation of the feminine. Only this time, the testimony is a literal one, conveyed through the prodigious ascent and fiery descent of Benedetta Carlini (Virginie Efira), a pesciatine nun who was as cocksure in her betrothal to Christ as she was devoted to the blessings of sisterhood. As Brown notes in Immodest Acts: The Life of a Lesbian Nun in Renaissance Italy, convents of the era were extremely competitive, prospective applicants far exceeding the number of available cells. Benedetta’s family, while well-off, enrolled her in one where labor offset a portion of the hefty dowry. Likewise, she was only obliged to pledge ephemeral chastity, sans the usual eternal obedience to poverty. It is against this backdrop that Verhoeven and a ferocious Efira cast their most complex, and titillating, plot points.

Also crucial to the film are Charlotte Rampling, as a mature abbess thwarted by her own lack of faith when faced with Benedetta’s increasingly dramatic and implausible encounters with Christ, and the 29-year-old Daphne Patakia, as the non-virginal Bartolomea, who enters the convent through sheer will. The two young nuns collide in conflict and—inevitably—in a faith-informed, insatiable lust where little is left to the imagination. Benedetta’s adventurous—and, by now, excessively discussed—sex scenes speak less to homoerotics, provocation, or sacrilege than they do the Church, whose patriarchal figures have voyeuristically thumb-twiddled over whether and which forms of lesbian congress might warrant punishment. According to Brown, St. Augustine didn’t give much weight to sapphism. Ludovico Maria Sinistrari, baffled by it, demanded, "How can one woman lie with another in such a way that their rubbing against one another can be called sodomy?" The Church’s Joannes Dominicus Raynaldus designated lovemaking without ejaculation cause for death by burning. These are but two of many instances of the Church governing the bodies of its worshippers. Regardless, Verhoeven wants us to know who the real perverse parties are here, and he avoids charges of blasphemy by mining the history of the Catholic Church in rigorous, drippy excess.

Fleeing the hustle and bustle to focus on their own respective writing projects, Chris and Anthony become increasingly defined by emotional distance, differing work interests, and imbalanced notoriety. As local women clamor for Anthony after a screening of one of his films, Chris wanders Fårö’s roads less traveled with Hampus (Hampus Nordenson), a student and trusted steward of the Bergman estate. Like Bergman, Tony is drawn into darker material during his residency, sketching women in BDSM restraints in his notebook, while Chris is less moved. “They’re like horror movies without the catharsis,” she tells Tony of Bergman’s oeuvre. Instead, she considers alternatives to Bergman’s evocation of love and the six women who fathered the filmmaker’s nine children. While in a gift shop, she purchases a replica of the pair of sunglasses that Bibi Andersson famously sported in Bergman’s Persona; Chris is good-natured, wryly playing the role of the muse despite having much of her own to offer.

As Chris tells Tony about her screenplay outline and her uncertainty regarding its ending, her story of young love lost on Fårö comes to life on screen, with Mia Wasikowska and Anders Danielsen Lie playing her star-crossed lovers. As Tony spaces, Chris realizes she must go it alone, at least in art; one man might have defined the island for generations, but there is ample room among the lambskin rugs and jellyfish for Chris to find her own authorial identity. Bergman Island spoils rotten the discerning cinephile with its endless meta-commentary and fearless interrogation of an imperfect man’s successes.

Minimalist, grey, and shot largely outdoors, Laura Samani’s first feature, Small Body (Piccolo Corpo), set in 1900, follows Agata (Celeste Cescutti), a provincial woman on a lonely, determined journey to find a singular woman of faith, laboring outside of the Catholic Church, who will give the dead infant the birth name she lacks, thus rescuing the child from Purgatory. Sacrificing everything but the wooden box tethered to her back containing her daughter’s remains, Agata crosses lakes, woodlands, mountain ranges, and thieves to find solace for her firstborn. One such hustler comes in the form of Lynx (Ondina Quadri), a young man who attempts to sell Agata into enslavement as a wet nurse before their fates become forever intertwined, and Lynx offers to accompany her on her journey in exchange for the contents of her box.

Throughout Agata’s quest, Samani’s sparse, deliberate dialogue provokes and answers questions about what it means to be a woman who has failed at this core task of childbirth. Likewise, Lynx’s gender transgression—unnoticed by viewers until it is mentioned by his mother when he appears on his family’s doorstep requesting aid for an ailing Agata—implies his own departure from traditional Italian gender roles. The same proves true for their entire voyage in search of a peaceful alternative to religious orthodoxy. Change, and its catharses, are inevitable. By insisting on building companions of the barren and the transmasculine, Small Body evokes a passage from The Argonauts in which Maggie Nelson observes, “Evolution strikes me as infinitely more spiritually profound than Genesis.”

In Italian directorNanni Moretti’s latest dramatic comedy, Three Floors (Tre piani), adultery brings about humility for the middle-class patriarch Lucio (Riccardo Scamarcio). The film opens with a lingering close-up of residential Rome’s heavy-lidded dusk. Four cars neatly parked outside a lavish multi-family home falsely allude to the suburban ideal: complacency, stability, routine, and—especially at this hour—stillness. But where families are concerned, tranquility is never the default. Moretti is initially gentle in shaking the viewer from her naive slumber; a woman moves past a window on the upper floors. Monica (Alba Rohrwacher) descends onto the street, alone and in labor, dragging a suitcase behind her. Tires screech before we hear the grotesque crumpling of metal against bone. Monica is fine. Another woman, lying in the street, is not—neither is Lucio, whose glass-and-mortar first-floor home office is now occupied by his drunken neighbor Andrea (Alessandro Sperduti) and his hatchback. From then on, tranquility never returns to this building or its occupants.

Structured in three acts transpiring five years each, Three Floors makes a concerted effort to drag viewers into the Nietzschean spiritual evolution of the characters: Monica, with her husband always away for work, raises a daughter alone while sparring with her own matrilineal madness; Lucio grows so fixated on an elderly neighbor’s preoccupation with his own young daughter that he has an affair with the man’s underage granddaughter. Andrea grows increasingly sour with the mother and father who refuse to rise to his defense and foot his legal fees. As the quinquennial chapters pass, viewers anticipating masculine introspection or feminine emboldening may grow fatigued by the endless conflicts these figures encounter and manifest for themselves. Three Floors’ finale offers only partial satisfaction after all the universal taboos of bourgeois life have been checked off Moretti’s to-do list. Based upon the 2015 Israeli novel by Eshkol Nevo, Shalosh Qomot, Three Floors is missing the deep inhalations, reflection, and cultural specificity of its source text, in which a character observes, “If there is no one there to listen—there is no story.” With Three Floors, the inverse risks being true.