Welcome to Our House 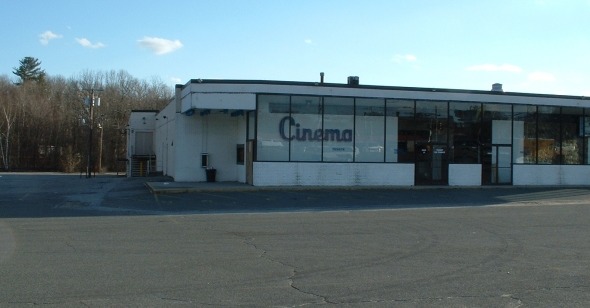 Welcome to Our House
By Michael Koresky

The movie theaters that defined the first 18 years of my life dotted the suburban landscape just northwest of Boston. These included, first and foremost, the eight-screen Route 3 Cinema (pictured above), from my hometown of Chelmsford; at this crummy joint, which finally shuttered in 1998, one’s feet invariably stuck to the floor like a bug on flypaper, the popcorn was completely unremarkable, a general smell of mildew hung in the air, and a film print melting in the projector was hardly a rare occurrence. It’s also where I cried at Bambi, was tickled by the singular irreverence of Little Shop of Horrors, nearly wet myself laughing at The Money Pit and Home Alone, delighted in the illicit thrills of seeing Raising Cain without parents. The other crown jewels that made up my own personal “Emerald Necklace” of Greater Boston movie-going were the two closest “art-house” theaters to our town: the storefront twin Lexington Flick (now the Lexington Venue), where I saw Howards End, and the West Newton Cinema, a single-screen theater in the fifties and sixties, haphazardly chopped up into screens of indiscriminate size by the time I saw Breaking the Waves there. Less exciting but still integral was the puny three-screen Billerica Flick, the crappiest of the bunch, but in heavy rotation nevertheless due to the variety it showed, including such essential experiences as The Hand That Rocks the Cradle inexplicably shown in a “sneak preview” double feature with Beauty and the Beast. Located in a strip mall, the Flick also closed forever in 1998.

In addition to these movie houses, which were either independently owned or part of small local chains, there were the General Cinemas in Tyngsboro (The Crying Game, Cliffhanger) and Burlington (Casino, Twelve Monkeys), and the 14-screen Showcase Cinemas in Lawrence (The War of the Roses, Schindler’s List), which, with two separate buildings separated from one another by the busy Wintrop Avenue, always seemed like a megalopolis to me. Little did I know that back in the sixties, Lawrence’s single original structure housed just two theaters, one of which was among the only screens in the area equipped for both 70mm and Cinerama. Only on very rare occasions would I be whisked away to the legendary Brattle Theatre in Cambridge (Pinocchio), depending on whether my mother wanted to make a day of it in the city.

Remembering any one of these temples triggers in me sensations of cocoon-like warmth and an almost exaggerated darkness, as though the projector’s beams were cutting through pitch-blackness. And it’s not merely an abstract sense of the past: the excitement of being in those theaters, of watching those dreams unfold on-screen, whether the movies were good or bad or (most often) somewhere in the middle, remains thrillingly present and specific. I can recall precisely what films I saw and which theaters I saw them in; I even have a foggy sense of the general spots where I sat for each film, as my distance from the screen is an essential ingredient for the formulation of the memory. The movie itself is only part of a totalizing experience, of willing submission, of communal idolatry.

On the experience of being young, Edmund White wrote, “We often experience things in the present with a nostalgia-in-advance, but we seldom guess what we will truly prize years from now.” I find this to be true about the movies, which were such a central part of my daily anticipations and thought processes that I couldn’t possibly have seen them as anything that would ever, even nominally change. I left home for New York in 1997, and suddenly I was faced with a new buffet of choices, theaters that showed an array of films new and old, provocative and traditional, and they were all so accessible—I didn’t have to pile into a car and drive 45 minutes just so I could see the latest Mike Leigh movie everyone was talking about. Movie theaters seemed more important to me than ever: communal spaces where like-minded young adults and my university compatriots could congregate and share in the same experience, to be followed by a drink or a slice of pizza. Now the conversations around the movies were as important as the films themselves (I recall standing post-screening outside the Loews Village 7 on 3rd Avenue trying to angrily correct my culturally prescient friend who was instantly heralding American Beauty as “the movie of the year,” as opposing factions formed behind each of us), as was the sense of being in a wider community that cared about the cinematic experience as one would care about a friend or family member. As a kid, it felt inspiring to have six daring geriatrics in the theater with me watching Leaving Las Vegas in the Lexington Flick’s attic screening room; in New York there were packed houses on Friday nights for just about everything. We were in this together—we felt such excitement as 18-year-olds to feel kinship with Ethan Hawke and Uma Thurman, who just happened to be sitting next to us in the front row at the Angelika to experience The Sweet Hereafter. During my years in college and immediately after, modes of film production and projection began to see the first signs of major change; nevertheless, the theatrical experience has remained.

For some reason, when I think of the movie theater experience, my mind first takes me back to the feeling I had watching Martin Scorsese’s The Age of Innocence at the Lawrence Showcase Cinemas back in October 1993. It’s all surely exaggerated in my mind, but I specifically remember the tomb-like quiet and the enveloping darkness in the room, and how all this contributed to the power of what I was seeing. The scene that stands out for me for some reason is when Daniel Day-Lewis’s lawyer Newland Archer visits Michelle Pfeiffer’s Countess Olenska to persuade her to return to her disreputable husband. Though he has come on ostensibly professional matters, as divorce counsel, he is beginning to realize his attraction and perhaps that he’s slowly falling in love with her; this contributes to a sense of emotional tightening, enhanced by the constricted framing and the cramped quarters of the drawing room in which they sit, the light from a crackling fireplace dancing on their faces. I remember the hushed tones of their voices as they struggle to maintain decorum despite such clearly unsettling business, the emotional and social consequences of which 14-year-old me couldn’t possibly understand. It made me feel like I was less a witness to their drama than a conspirator to their suffering.

I’ve seen Scorsese’s ceaselessly brilliant film many times since—on VHS, on DVD, on Blu-ray, in rep houses, and at Museum of the Moving Image with Scorsese in attendance—but nothing has ever quite recaptured that first feeling I had in that room. I know my parents were both there; I imagine the matinee showing was filled to at least medium capacity. But in my memory, it is just me and the screen, as though I stood between Day-Lewis and Pfeiffer in that room. All else has faded away but the sounds of the fireplace, the emotional burden carried in their stares, the ache of their suppressed attraction. Watching it at home, I admire the craft, scope, and fine-engraved subtlety of The Age of Innocence; in the theater, it was like staring into an abyss.

Until we again know what this moment means, we’ll have to live within some of those moments of moviegoing we carry with us. This column will not simply be about great films we saw in theaters, but about films on which are imprinted the mental traces of the past, of the ineffable experiences of seeing them at a certain point in our personal histories.

This moment is, of course, alarming. Not being in a movie theater for a possibly long period of time—while a populace already shifting away from the theatrical experience further entrenches in alternate media viewing methods—may begin the final process of designating the theatrical experience as a novelty. This is not to say that it will disappear, but that its status as a 20th-century communal phenomenon may be replaced by its continuance as a “niche” cultural activity—hence disposable. We’re not there yet, of course. We’re just here in this way station, this in-between state, which feels not unlike an empty movie theater either before or after show time. A place neither here nor there, a holding pattern, a timeless in-between.