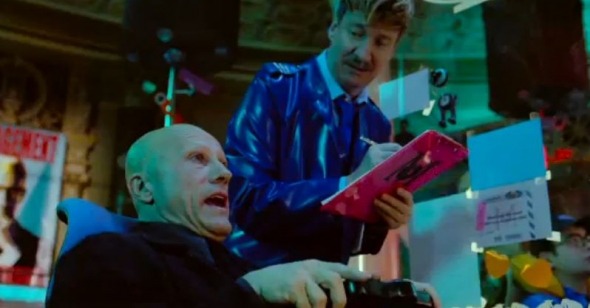 Out of Steam
By Jeff Reichert

Once upon a time, I would regularly contribute my hard-earned dollars to the box-office gross of each new Terry Gilliam film. I wasn’t alone, either: courtesy of major studio pushes, The Fisher King, 12 Monkeys, Fear and Loathing in Las Vegas, and The Brothers Grimm all found their way to theaters—sometimes thousands of them at a time. This seems worth mentioning because it’s now 2014, and Gilliam’s new film, The Zero Theorem, starring Christoph Waltz and Matt Damon, has opened on around sixty screens nationwide (and only one in Manhattan), more than a year after its world premiere in Venice, courtesy of an upstart distribution collaborative. I decided to forgo theaters entirely, opting instead to catch the film via my cable provider’s on demand service the day before it opened. It seems most theatrical audiences opted to stay away as well. What a difference a decade makes.

Gilliam’s position as a sometimes moneymaking, awards-feted studio auteur was, of course, uneasy at best, and probably destined to be brief. Following the breakout of 1981’s modestly budgeted Time Bandits, Brazil was famously meddled with by Universal, and the expensive The Adventures of Baron Munchausen barely saw the light of day. The run of more robust studio support from The Fisher King to The Brothers Grimm was interrupted by Gilliam’s cursed Don Quixote project and the subsequent act of creative/commercial self-immolation that was Tideland. (Ever the Python trodding on good taste, at the beginning of the film’s miniscule 2006 release, Gilliam showed up at New York’s IFC Center bearing a homemade cardboard sign reading “Studio-less filmmaker. Family to support. Will direct for Food.”) Sony Pictures Classics’ contained but largely successful U.S. release of The Imaginarium of Dr. Parnassus all but reinvented Terry Gilliam as independent auteur, and suggested there was still an audience out there for the filmmaker’s dutch angles, distorted close-ups, and acerbic dystopia. Even so, it was the kind of return to form that made one wonder if the thing itself wasn’t pretty flimsy the first time around.

And now arrives The Zero Theorem. It’s the story of the pasty and bald Qohen (pronounced Cohen, played by Waltz), some kind of future mathematician for a company called Mancom who solves problems via a contraption that has him pedaling an exercise bike like mad while manipulating a PS4-esque controller to move shapes through a virtual world that looks the near-future update of Star Fox. The production design and costuming tell us much of what we need to know about Qohen: in a world where everyone and everything burst with colors and patterns, he’s Johnny Cash–monochrome in black. At the film’s outset we find Qohen bugging his supervisor, Joby (David Thewlis, sporting a Davy Crockett–style cap as a toupee), to allow him to work from home so as to avoid interaction with the other humans he so despises and help increase his productivity. He’s also waiting for a very special communication he’s worried he’ll miss while at the office. And, as if an added layer of neuroses seemed absent, he’s also convinced he’s going to die shortly. At a party at Joby’s later that evening he meets Management (Matt Damon, white-haired, in a Liberace-esque suit), who offers him a chance: if he will work on the Zero Theorem, a problem that has already driven many a mathematician mad, he can stop showing up at the office.

We saw this home in the film’s swirling, needlessly disorienting first shot: a dilapidated church filled with steampunk requisites, such as computers with hologram projection screens set next to rotary phones, dirty future dishes piled high next to General Electric appliances. The rest of the film mostly takes place in this space as Qohen begins to attack the Zero Theorem, only to find it might be beyond his ken. As he falls further and further behind in his work, distractions begin to mount. Sex-kitten Bainsley (Mélanie Thierry, here to do little more than expose her breasts and mangle a German accent), whom Qohen met earlier at Joby’s party, is sent to relieve some of his stress, and they eventually begin interacting via virtual sex suits that transport them to play in a tropic beach paradise. Management’s son, computer whiz Bob (Lucas Hedges), worms his way into a kind of sidekick status for the formerly adamantly alone mathematician. And Qohen’s digital therapist, Dr. Shrink-Rom (Tilda Swinton sporting false teeth that are shockingly even worse than her fake chompers in Snowpiercer), keeps popping up on his screen to give him life advice. Meanwhile, pressure from his employer continues to mount, and Qohen still anxiously awaits a call on his rotary to let him know “what it’s all about.”

If you’re wondering whether all these distractions—the love interest, the boy, the Theorem—might possibly be narrative props meant to draw Qohen out of his self-imposed isolation and hypochondria, help him reconcile with a troubled past and maybe find meaning in his life, then you’d be right. Gilliam, an ever-inventive visual stylist has always evinced a fondness for self-actualization-by-overcoming-trauma hokum. In his final, heroic leap to the void—a climax that seems terribly weightless, due both to novice screenwriter Pat Rushin’s over-reliance on impenetrable jargon and his inability to craft a narrative of clear stakes—Qohen rediscovers some sense of purpose and succeeds in scuttling Mancom’s plans to dominate humanity. His success also allows Gilliam the chance to deploy some of the worst man-floating-in-space visuals since The Fountain. Though it’s perhaps the film’s final images of pale, naked Waltz standing alone on the beach watching a super-saturated CG sunset that linger longest . . .

The Zero Theorem may make little sense, but we once looked to Gilliam less for rigorously structured, internally coherent storytelling than for eye-popping imagery that played particularly well on the big screen. His new film is certainly underwhelming in my living room, but it’s hard to imagine The Zero Theorem would be much to look at in a theater either, so uninspired are its futuristic images, the likes of which we’ve grown well accustomed to since the days of Blade Runner. Has Terry Gilliam not ventured into the outside world since Brazil? Critiquing today’s technocracy by projecting a future featuring a proliferation of screens blasting moving advertisements in the faces of workers trudging solemnly to professional enslavement isn’t a fresh idea, and it certainly doesn’t result in fresh visuals. If, in The Imaginarium of Dr. Parnassus, Terry Gilliam’s protagonist was a surrogate who revealed his fears of being little more than a flimflam artist even as he mounted something like a comeback, the exhausted The Zero Theorem suggests that he’s perhaps given up entirely.