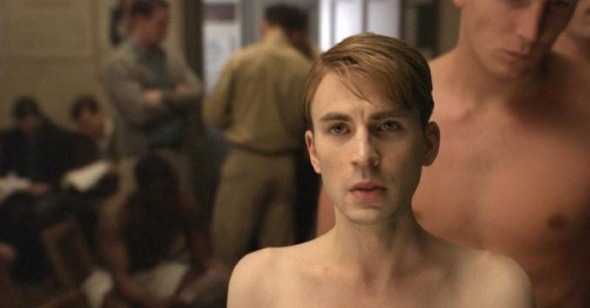 We‚Äôre almost there, Jeff! Next summer, Thor, Iron Man, the Hulk, and Captain America will finally leap out of their discrete summer-blockbuster cubicles and enter a world of communal superheroics, and the three-year, five-film, multi-tentacled franchise monster otherwise known as the Avengers series will reach its apotheosis. It‚Äôs been a hell of a ride, if you happen to get your jollies off multi-movie marketing blitzes and cross-character brand synergy. But what of the films themselves? Is our investment in the individual movies increased knowing that they are joining forces? Or are we more likely to think of the pre-Avengers pictures as little more than wallet- and time-draining filler? These issues crossed my mind a few times throughout Captain America, both because of the film‚Äôs temporal proximity to The Avengers and because there wasn‚Äôt a lot on screen that was really sucking me in.

There‚Äôs little objectionable or wrong-headed in this tale of shrimpy Brooklynite Steve Rogers (Chris Evans), whose voluntary exposure to a secret strength serum makes him the U.S. military‚Äôs number-one weapon against crazed Nazi scientist Johann Schmidt (Hugo Weaving). Director Joe Johnston dusts off some of the mise-en-sc√®ne from his earlier foray into retro-futurist tinged action, 1991‚Äôs The Rocketeer. The Captain America costume has a particularly nice tangibility to it. It looks like it was made from stuff lying around an Army base. And Evans lends a sweet, self-effacing earnestness to the role. Certainly, the decision to digitally paste his head onto a scrawnier body for the scenes of Rogers pre-bulk-up results in some unwelcome trips to the uncanny valley. Once he‚Äôs packed on the muscle, though, you never quite forget the little guy inside the big galoot‚Äôs body: a nifty trick that owes much to Evans‚Äô effective underplaying.

But to what end? Roughly 24 hours after seeing Captain America, I struggle to sketch its basic plot structure, much less individuated moments of humor, pathos, or suspense. Yes, the script is both incident-packed and pretty weightless, but might this also be a result of the film‚Äôs explicit placement within the larger franchise-building project? The film‚Äôs WWII-era plot line is book-ended by present-day sequences, and it gives nothing away to note that Rogers appears in them both, released from deep-freeze hibernation to join his fellow superheroes for the contemporary perils of The Avengers. Plot convolutions and last-minute reversals seem all the more inconsequential once they‚Äôre positioned as mere signposts along the way to a bigger, better destination down the road (one that you‚Äôll have to pay an additional toll to see). Furthermore, like its titular hero, Captain America feels a little too unquestioning of its own marching orders. It serves its part in the larger struggle‚Äîin the character‚Äôs case, the battle against international fascism; in the film‚Äôs case, the battle for sustained corporate fascism . . . erm, the hearts of fans‚Äîwithout bothering to develop much of a personality to call its own. ‚ÄîMC

Wow, Matt, I was totally unaware that Captain America was less a franchise-starter than the final stepping stone on the way to an amalgamated superhero convention already slotted into the release calendar for next summer. (I noticed that the film‚Äôs poster dubbed its hero ‚ÄúThe First Avenger,‚Äù but I didn‚Äôt really think much of it at the time.) This knowledge does slightly lessen my overall good will towards the picture, which was, to be fair, modest at best. Now, the weird present-day bookend seems perfunctory, rather than a potentially intriguing point of departure‚ÄîI left the theater imagining a sequel that spends a good 20 minutes at the outset catching earnest Steve Rogers up on the seventy years of world events he‚Äôd slept through with mild excitement. Captain America uno was certainly at its best in its pre-action sequences, which focus on such minor details as character, dramatics, and narrative‚Äîa miracle by today‚Äôs blockbuster standards. You wouldn‚Äôt mistake it for Chekhov, but it also feels like the big summer actioner most concerned with providing a complete theatrical experience.

Credit goes to Johnston, I suppose, for landing this one a little ahead of the pack, but even so it‚Äôs still a pretty bland affair. I wish this was an intentional riff off Chris Evans‚Äôs generic everyboy good looks, but even this film‚Äôs somewhat cheeky self-regard (was it just me, or is Hugo Weaving doing the best Werner Herzog impersonation of the year?) likely doesn‚Äôt extend so far. Once Evans is transformed from shrimp to hunk by German scientist Dr. Abraham Erskine (a game, winking Stanley Tucci in another amused supporting turn) and things really got ‚Äúmoving‚Äù my interest stalled‚Äîa little more breathing room in the film‚Äôs hurried backend might have done wonders. As it was, Captain American tramps through Europe defeating baddies in a bunch of places, over an indeterminate amount of time with a bunch of barely sketched supporting dudes before the big finale which, I think, took place on a plane. Though I may not remember much of Captain America a week from now (or tomorrow), I can say that I didn‚Äôt leave the theater feeling depressed and exhausted (Michael Bay), depressed and condescended to (Christopher Nolan), or just plain depressed (the rest). A win for the good guys? Shall we meet back here in say, twelve months and find out? ‚ÄîJR