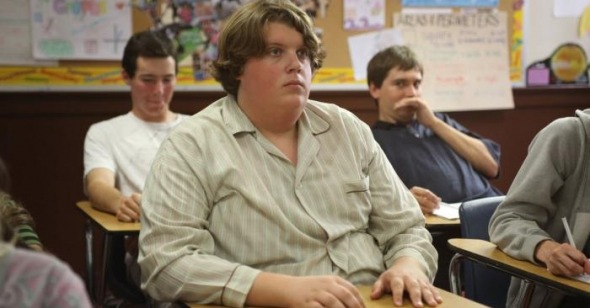 The terror of teenhood is in full flower in Azazel Jacobs‚Äôs alternately disarming and discomfiting Terri. Mostly gone is the (intentionally) coddling warmth of Jacobs‚Äôs breakout, the melancholic and marvelously musty Momma‚Äôs Man. That film was as much an act of devotion to the director‚Äôs parents‚Äîthe legendary found-footage-alchemist Ken Jacobs and artist Flo Jacobs‚Äîas it was an ambivalent expression of stunted youth, which has been perhaps the favored topic of boy filmmakers everywhere over the last decade or so but which Jacobs related with tenderness and a lack of clich√©. Momma‚Äôs Man‚Äôs veiled-thin-as-gauze autobiographical protagonist may have been a grownup, but he was as fearful of the future as any imaginable gawky adolescent, returning to his parents‚Äô womb-loft in Tribeca while in the midst of marital problems. Terri (played by relative unknown Jacob Wysocki), on the other hand, has had no experience with women to have even manufactured a perception of his relation to them. He‚Äôs stuck in that post-pubescent netherworld, unsure of his next move, or even if there is a next move, so intractable and eternal does his stasis seem.

Making matters worse for Terri is the fact that he is orphaned, and living with his heavily medicated, elderly Uncle James (Creed Bratton), who needs more supervision from his nephew than any child should be required to give. Terri is able to conceal his domestic realities from his cruel classmates: what he cannot hide is his appearance. Terri‚Äôs obesity is clearly one of the defining factors determining his self-imposed outcast status. It‚Äôs also initially where Jacobs, a compassionate filmmaker, goes wrong. The film‚Äôs first images, in which a dejected-looking Wysocki‚Äôs fleshy body all but spills out of a grimy bathroom tub straight from Gummo, might as well come fixed with a placard announcing ‚ÄúTERRI IS FAT.‚Äù Soon enough, the robustly figured yet facially wilted high schooler is gulping down nauseatingly composed plates of beans on toast. He‚Äôs framed in artfully meaningless shots through bisections of doorframes. It‚Äôs a detached, observational opening dashed off in indie-ville shorthand that doesn‚Äôt match the more immersive, effortlessly emotional film to come.

The first clue to the film‚Äôs extraordinariness is Wysocki, whose sustained dyspepsia doesn‚Äôt come across as rehearsed or manufactured, but rather the expression of a genuinely lived-in sad-sack in the making. He‚Äôs a real find: when he stares out from his stout blotchiness it‚Äôs from a place of palpable anguish. After a bully offhandedly grabs Terri‚Äôs breasts upon exiting a classroom and exclaims ‚Äúa-oooh-ga‚Äù, Wysocki‚Äôs face registers a poignant resignation as much as quiet anger. Terri‚Äôs proclivity to wear pajamas to school seems less a quirk than an act of depression when the clothes are draped around Wysocki‚Äôs expressive, lumbering frame. As befitting a teen, the young actor doesn‚Äôt seem to intellectualize his role, instead inhabiting the character with a graceful sway that feels experiential and for Jacobs appropriately documentary-like.

Jacobs helps to achieve this by placing his young star in a film structured around short scenes and motifs more than a tenable narrative through-line, though each has an emotional payoff. There‚Äôs the bit about the mousetraps Terri‚Äôs uncle has him set in the attic (a grotesque annoyance that leads to an unexpected encounter with nature); the subplot about the girl at school who‚Äôs been ostracized for allowing a fellow student to finger her in class (Terri‚Äôs defending her leads to a surprise friendship); the peripheral character of the scowling, willowy Chad, eternally in the principal‚Äôs office waiting room, who has the nasty habit of yanking his hair out one painful clump at a time (in a complex turn of events, he ends up somehow both Terri‚Äôs friend and antagonist).

The most central relationship in the film is between Terri and his principal, Mr. Fitzgerald, played by John C. Reilly with his patented, winning mix of candid buffoonery and maddening obtuseness. Fitzgerald first approaches Terri when the kid is kicked out of class (Jacobs staying an extra beat on the teacher‚Äôs sad, surrendering sigh after she forces him to leave is a beautifully empathetic touch) and sent to his office. Fitzgerald calls him ‚Äúdude,‚Äù treats him as an equal, shares with him his special stash of malted milk balls. Yet is his chumminess to be trusted? Terri makes us suspicious of Mr. Fitzgerald, which allows us to remember what it was like to be a teen and eye adults with wary glances. Is he genuinely helping our protagonist in their weekly bull sessions or is he just going through the motions? Is it okay that Terri is just one of many students getting extra attention from the principal, thus making him not as special as Fitzgerald claims? Should we reject Fitzgerald‚Äôs attempts at folksiness if he tells the same anecdotes about his own troubled childhood to every kid who walks through his office door? Is his separation of students into two groups‚Äîthe goodhearted and the badhearted, as he calls them‚Äîa nefarious, reductive way of doing his job or a necessary means to an end, a way to get his students to start considering their own hearts at a time when they may not be thinking with that particular organ?

Jacobs‚Äôs film could exist at any time (rarely if ever do we see these kids fiddling with mobile devices or computers at school or elsewhere; Terri still watches an old tube TV), but it‚Äôs particularly poignant as a film about now. Terri could be viewed as an indirect examination of the complexities of the education system, asking what an instructor‚Äôs responsibilities are to students beyond core curriculum. But it goes much deeper. When Terri hosts an impromptu hang-out session in his uncle‚Äôs shed with two classmates who have become oddly incongruous friends of his, Jacobs turns their awkward interactions into a pas de trois so expertly choreographed in its relatable anxieties and sexual frustrations that it becomes downright harrowing. Here, we realize that fragile stabs at communication among teens will always be the same, no matter the era. As one young character states, ‚ÄúIt‚Äôs good to be wanted.‚Äù This is the simple sentiment underlining so many other teen flicks, yet it‚Äôs so rarely stated in such a refreshingly bald manner.