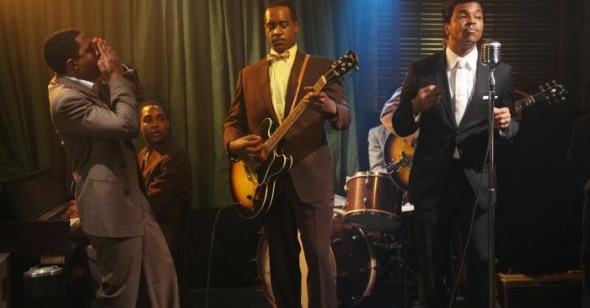 When Syd Nathan, the CEO of King Records, died in 1968, James Brown, the label‚Äôs greatest star, bought the desk from Nathan‚Äôs office and had it fitted with a gold plaque reading ‚ÄúI Remember the Man Syd Nathan.‚ÄĚ Nathan was white, and Brown boastfully black‚ÄĒso how to account for this? If we were to believe the movies‚Äô official history of rock music, we can‚Äôt; the narrative is one of the grudging black artist‚Äôs innovation, white owner‚Äôs exploitation, and cracker shyster‚Äôs appropriation‚ÄĒthe attitude summarized in Mos Def‚Äės insipid, ahistorical song ‚ÄúRock ‚Äėn‚Äô Roll.‚ÄĚ

Def shows up in Cadillac Records as an insouciant Chuck Berry. Enlightened liberals in the audience will enjoy their chance to applaud their preconceptions when Def/Berry catches out the Beach Boys‚Äô plagiarizing and plays martyr to bigotry during his Mann Act arrest, but screenwriter/director Darnell Martin‚Äės democratic treatment places Berry‚Äôs voice as just one among a multitude. In fact, when Berry first arrives in Chicago, he‚Äôs playing country guitar twang‚ÄĒMartin‚Äôs subtle scoff at the myth of ‚Äústolen‚ÄĚ music. (Besides, as everyone knows, Berry actually lifted his style from a time-traveling Alex P. Keaton.)

Martin‚Äôs fictionalization of the rise and fall of Chicago‚Äôs Chess Records (1950-68) uses the declamatory blues song ‚ÄúI‚Äôm a Man‚ÄĚ as its theme, and follows several men attempting to assert that fact through womanizing, moving 45s, and packing .45s: immigrant label founder Leonard Chess (b. Czyz, in Poland; played by Adrien Brody); his first star, Muddy Waters (Jeffrey Wright); Waters‚Äôs protege, Little Walter (Columbus Short). The aspiration and feeling at times ring as pure as Midnight Ramble melodrama, everyone trying to get through their own way, with contempt for the rest‚ÄĒWaters in a day-by-day blue-collar trudge, Walter through pure anarchy and, with imperious independence, Howlin‚Äô Wolf (Eamonn Walker, in a furnace-hot performance).

It‚Äôs a scattered movie, alloyed by uniformly high performances and extravagant emotion. Considering its aspirations to historical scope, the timeline is radically reshuffled (Elvis leaving for the army after the Rolling Stones hit Chicago?); key characters (Chess‚Äôs brother Phil) are missing, as well as musical elements‚ÄĒ‚Äúhillbilly‚ÄĚ is only alluded to, jump blues not at all; the Southern church is entirely absent (this is a felt lack, as you can‚Äôt rightly make devil‚Äôs music with no God).

Rock obscurantists can be worse sticklers than sci-fi fanboys, but it must be said that Cadillac Records doesn‚Äôt condescend to history even when jumbling facts‚ÄĒscenes are largely treated as interactions between feasible humans, not as excuses to broadcast racial parable. Respect is paid to the complex cultural pluralities behind the music.

Here, the blues, at one point, is described as ‚Äúa whole lot of fuckin‚Äô‚ÄĚ, and that‚Äôs what we see: Chess fuckin‚Äô his roster with improvisatory bookkeeping and unconscious paternalism; the artists fuckin‚Äô themselves (and Chess) with profligacy and belligerent living; and actual fuckin‚Äô, as the film‚Äôs later chapters are dedicated much to the affair (historically unsubstantiated) between Chess and his top 1960s signee Etta James (Beyonce Knowles). The story goes that Chess had to leave the studio to hide his tears when he first heard James sing ‚ÄúI‚Äôd Rather Go Blind‚ÄĚ‚ÄĒBrody‚Äôs expressive devastation and the luxurious masochism in Knowles‚Äôs voice entwine here to the highest in the film‚Äôs Himalayan emotional peaks.

The child of all that fuckin‚Äô was electric rock ‚Äėn‚Äô roll music, sharing the genes of declass√© Eastern European Jews who emigrated to the Brill Building from piss-poor shtetls, Scotch-Irish rednecks from the rawest backwood hollers, and sharecroppers and their sons from Mississippi Delta shacks. It was the 20th century‚Äôs truest music, and Cadillac Records doesn‚Äôt disgrace it.