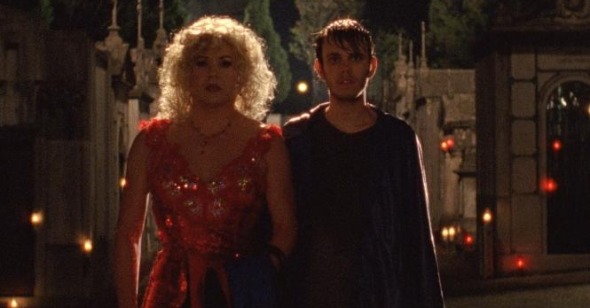 There‚Äôs a part of Jo√£o Pedro Rodrigues that likes to get down to brass tacks. In the first scene of his 2000 debut, O Fantasma, a dog scratches and yelps at a locked door. Cut to the action inside the room, and we see a black-suited figure right out of Feuillade, busily penetrating a man whose mouth has been stuffed with cotton. In Rodrigues‚Äôs sophomore effort, Two Drifters, we‚Äôre served up a series of similar shocks: a passionate farewell kiss between two men is swiftly followed by the bloody death of one of them, then by a funeral where a female stranger fellates the corpse‚Äôs ring off his finger. These first two films take the universe as one big erogenous zone, in which anything‚ÄĒan ass, a motorcycle, the wall of a public shower, even a tombstone‚ÄĒis waiting to be humped. No need for foreplay; we‚Äôre assaulted with the climax right out of the gate. And in its aftermath we meet another Rodrigues, one who withholds, who occludes and mystifies that sense of clear narrative purpose other filmmakers tend to reveal in bold letters. The films circle ritualistically around their initial blast of sensation. In its quest to reconcile the life of imagination and primal desire with the physical realities that close in around us, Rodrigues‚Äôs cinema sets his characters off sniffing, licking, and rubbing up against this implacable world in hopes it will respond.

In To Die Like a Man, it does. Despite its fair share of dreary, seedy interiors, this story of a Lisbon drag icon named Tonia (Fernando Santos) is a retreat into the natural world and, briefly, into the cosmos. It‚Äôs a film that yearns for and touches upon the wholeness that can be found in a landscape, a film in which the universe can be heard talking back to us in our loneliness. Though it contains many more moments of conventional emotional intensity than its predecessors, it‚Äôs ultimately a mellower film, and its lengthy running time lends an almost leisurely pace that contributes to a surprising serenity. With echoes of Jacques Nolot‚Äôs Before I Forget, the film is also a tough portrait of aging queer, of the trials of living in a body torn between persistent desires and a growing rejection of itself. Where Rodrigues‚Äôs earlier works are built around urgent expressions of youthful, hormonal lust, To Die Like a Man questions what desire means for someone preparing to leave his body‚ÄĒand, more provocatively, what it means to be transsexual as the body relinquishes its hold on one‚Äôs identity.

It‚Äôs difficult to know, at first, what Rodrigues will make of this material. O Fantasma and Two Drifters were neither psychological nor emotional; their dedication to envisioning states of uninterrupted arousal was so fervent the films seemed to stand in defiance of other encroaching human truths. Tonia is the director‚Äôs first real tragic figure: a low-energy diva given to slothlike movement, clinging fast to a stage career that has reached an end in the midst of a changing drag scene. Is Rodrigues capable of taking the melodrama of Tonia‚Äôs life seriously? Unfortunately, as we get acquainted with her turbulent romance with a young heroin addict she regards as both son and boyfriend, Rodrigues seems to have no idea how to make sex coexist with sustained melodrama. It‚Äôs disappointing that, after the epic horniness of his previous two films, Rodrigues has assigned such an unfulfilling sex life to his first transgender heroine.

Initially I suspected To Die Like a Man to be a case of condescension, with its gay male director looking to the transgender community as a social stratum more tragic and pitiable than his own. But the film‚Äôs major flaw may be that it dwells too heavily on interpreting trans identity as something beyond the human‚ÄĒas a struggle within nature, a state of ‚Äúbeing everything and nothing‚ÄĚ at once (in the words of Tonia herself), and ‚Äúa war against the Self‚ÄĚ (in the director‚Äôs statement found in the press notes)‚ÄĒall of which run the risk of turning the heroine into a metaphorical object defined solely by an existential crisis the film presumes she can never escape. The magnificent Fernando Santos does most of the heavy lifting in redeeming these clich√©s with a deeply felt, lived-in sense of pathos. Though we never get to see Tonia‚Äôs stage performance (the better to focus on the role she inhabits in her private life), Santos‚Äôs acting itself is in the best tradition of drag, playing off profound vulnerability with a studied regality.

For his part, Rodrigues ultimately transcends his film‚Äôs shortcomings by taking a sincere approach to classic queer questions of aesthetic sensibility, community, and spirituality. His newfound complexity is made evident on the surface‚ÄĒvisually, To Die Like a Man is a thing of tense beauty. The tightly composed 1:1.33 aspect ratio is a field that both signals spiritual imprisonment and facilitates aesthetic concentration: at one minute it denies depth, obscures vision, and lops off characters‚Äô body parts; at another, it intensifies emotional intimacies and the occasional dreamy color experiment. Beginning with the same gray and nocturnal palette of Rodrigues‚Äôs first two features, the film moves slowly into the light, and by its bittersweet end‚ÄĒwhen at its brightest and most open‚ÄĒthe use of luminosity (with its Biblical associations to creation and spiritual clarity) feels well earned.

To Die Like a Man finds a grave seriousness in camp. Where Rodrigues‚Äôs prior features immersed themselves in sexual fantasies and largely dispensed with realism, this film‚Äôs aesthetic is created from the collision of painful physical truths with ostentatiously artificial style. As the end begins to draw near for Tonia, who is gradually being poisoned by her breast implants, we are treated first to some gruesome close-ups of the silicone leaking from her body, then to a mystical interlude in the woods. After getting lost during a vacation, Tonia and her boyfriend stumble upon the secluded home of a transsexual couple. A skinny Liza Minnelli look-alike (Gon√ßalo Ferreira De Almeida) beckons them to enter the house, offers some tea, then takes them out for a walk through nature. All of a sudden, a round white moon swims up through the sky, accompanied by the haunting voice of Baby Dee from the heavens singing ‚ÄúCalvary.‚ÄĚ The screen begins to blush a deep cranberry red, and the camera holds still for several minutes until the song finishes. Spiritual reverence has arrived in the form of outrageous artifice.

Rodrigues has yet to pull off a convincing human relationship in any of his films, and even here, a subplot involving the return of Tonia‚Äôs estranged son feels disposable. But in To Die Like a Man he has given us for the first time a character with a clear need for deep spiritual connection. It isn‚Äôt clear whether the bit of surrealist-Catholic fantasia in the woods is meant to be redemptive or menacing, and whether or not Tonia has found a moment of comforting queer communion with the transsexual couple. But such ambiguities are appropriate, for in Rodrigues‚Äôs cinema of insatiable longings, even salvation leaves you unsettled, hungering for more. The grotesque shares a leaky boundary with the sublime; excess becomes indistinguishable from purity. Nature comes in to answer our dying heroine‚Äôs prayers, not by offering itself as a symbol of constancy, but by reflecting back to her the instability and contradictoriness she finds in herself. Like Tonia, the universe is daydreaming, living on make believe, uneasy with the physical fact of itself. When Toni sings fado in the film‚Äôs breathtaking final shot, she does so not by lip-synching but with her own natural, tremulous male voice. And from the valuable aesthetic lessons the film has imparted to us, we know this innate sound, too, is as much a beautiful illusion as anything else.