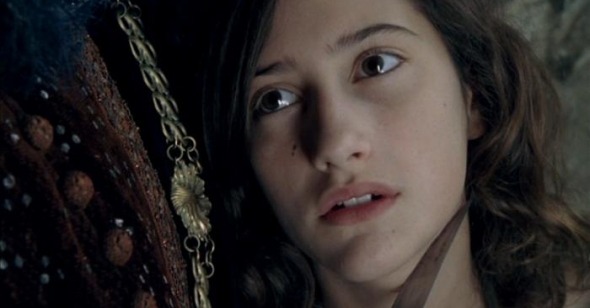 The Rules of Attraction
by Michael Koresky

The horrific bedtime story of Bluebeard is so ready for feminist subversion that news of Catherine Breillat‚Äôs tackling it almost arrives as something of a punchline. Often read to girls at an early age, this cautionary tale, about the ogre-ish nobleman who turns out to be a serial wife-killer, becomes fertile ground for exploring the seeds of Western sexual politics‚ÄĒrecall the interlude in Jane Campion‚Äôs The Piano in which a stage production of the story, acted in frightening silhouette, causes shocked Aboriginal audience members to brutally retaliate, while the whites look on unashamed. At its core a disturbingly instructive narrative about the importance of trust within male-female relations, the tale of the nefarious Bluebeard ultimately lays the blame for violence at the wife‚Äôs feet‚ÄĒif only she hadn‚Äôt unlocked that one forbidden room the poor heroine could have saved her sweet neck. It‚Äôs not just a matter of curiosity killing the cat but also of the woman not fulfilling her nuptial duties; regardless of her husband‚Äôs barbarism, it‚Äôs unlikely that murder would have befallen her if she had done as he asked.

None of this is that different from themes woven into many centuries-old fairy tales. Breillat‚Äôs new film ruminates on these matters, yet she‚Äôs not in forthright pedantic mode: rather, she‚Äôs closer to her self-reflexive satire Sex Is Comedy. We‚Äôre first clued into the tricky delicacy of the tone here from the framing narrative wrapping around the central, largely faithful, rendering of the fairy tale: two little sisters reading the story, the younger narrating it aloud to the older. The device becomes a way for Breillat to both make a greater dramatic point‚ÄĒabout how rules of male courtship are imbued into girls at an early age‚ÄĒand to simultaneously deflate her own drama by acknowledging it as child‚Äôs play. The younger girl, Catherine, played by five-and-a-half-year-old Marilou Lopes-Benites, is more curious, and in ways more sexually sophisticated than her older sister, Marie-Anne (Lola Giovannetti), even if she mixes up and misinterprets some of the information she‚Äôs gleaned from the adult world‚ÄĒwhen speaking of marriage between a man and a woman, she insists that after the wedding, ‚Äúthey want to become homosexuals.‚ÄĚ Her older sister corrects her, saying, ‚ÄúMarriage is when two people love each other.‚ÄĚ With a glint of sly self-confidence, little Catherine retorts, ‚ÄúNo, homosexuality is when they‚Äôre in love.‚ÄĚ

It‚Äôs the sussing out of these rules, true or perverted, by adults or children‚ÄĒof love, of courtship, of sexuality‚ÄĒthat gives Bluebeard its thematic heft. The story within the story, surely well known to many viewers, and here given the slightest twists throughout, begins in a convent school during what appears to be the late 17th century: two sisters, this time inversely named Anne (Daphne Baiwir) and Marie-Catherine (Lola Creton), both nearly drowning in their habits, are summoned by a suspiciously young Mother Superior to hear news of their father‚Äôs sudden death by carriage accident. Amidst tears they are sent home to their grieving mother. During the ride, they spot an ominous castle on the hill, which belongs to the mysterious local squire Barbe Bleu, whose many wives, it is said, were never seen again once they disappeared behind his walls.

Without dowries the women are forced to make life decisions, and once they cross paths with the title character (played with enormous sympathy and delicacy by the enormous and indelicate Dominique Thomas), he ends up smitten with Marie-Catherine. The rest is seemingly history‚ÄĒuntil Breillat has her way with the material. With such a simple, well-rehearsed tale, it‚Äôs all about the little differences: Marie-Catherine is not only fiercely independent, rather than the shrinking violet we might expect of such doomed heroines, but also surprisingly dominant in the relationship with her mammoth husband. On their wedding night, she makes her first demand‚ÄĒthat she keep her own room, a place for reading and repose, where her husband may never enter. It‚Äôs a delightful reversal that portends that events may not transpire quite as we expect.

Breillat mounts Bluebeard efficiently and cheaply, shooting on video and casting many local, nonprofessional actors; the result recalls the intentional period artificiality of such films as Eric Rohmer‚Äôs Perceval or Robert Bresson‚Äôs Lancelot du lac. In drawing attention to its own visual limitations the film summons an appealing cardboard storybookishness, resulting in some of Breillat‚Äôs most surreal, evocative images, from a forest shimmering with streaming light as a carriage pulls through and over fallen autumn leaves, to the ghastly beautiful tableau that lies behind Barbe Bleu‚Äôs forbidden room, to the repeated static shots of Marie-Catherine and then her husband ascending a turret‚Äôs spiral staircase, shown over and over in quick succession to mimic upward movement but clearly the same unbroken angle‚ÄĒthe effect is a feeling of enormous entrapment.

Austere, but only in the most teasing of ways, Bluebeard refuses to make victims of any of its characters‚ÄĒyet it also doesn‚Äôt temper its bloodshed. After one of the story‚Äôs most intense moments, Breillat immediately cuts to little Catherine jumping up and down on an old mattress exclaiming that Bluebeard makes her laugh. It‚Äôs a wonderfully reassuring moment, even though her sister, the more na√Įve and romantic of the two, is not so sanguine. How this parallel story ends is reminiscent of Breillat‚Äôs Fat Girl, in which the sexual fantasies of the younger spell doom for the older (Breillat, being a younger sister herself, obviously identifies with these observant younger girls). The director seems to be saying that power dynamics, whether between sisters or spouses, are taught and learned at an early age‚ÄĒand there‚Äôs no more destructive force than jealous love.