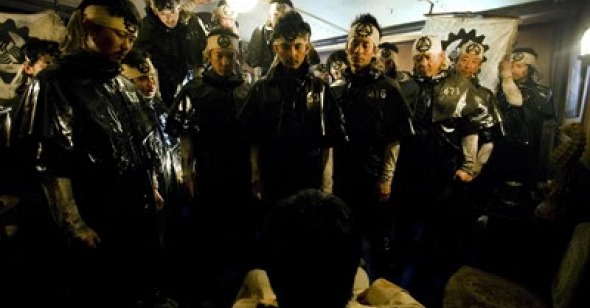 Ship of Fools
by Michael Koresky

From a critical perspective, the reasons why a contemporary film director would adapt a nationally famous piece of proletarian literature from the twenties are less important than how he chooses to bring it to the screen. So while watching Sabu’s new movie of the 1929 novel Kanikosen by Takiji Kobayashi—an autodidact whose impassioned communist writings and beliefs eventually lead to his torture and death at the hands of Imperialist Japan’s Tokko police—my mind was constantly toggling back and forth: were the film’s aesthetics purposely undermining the book’s message or actually trying to buttress it? Such is the minefield of postmodernism—foregrounded technique (in this case in terms of lighting, camera placement, and odd musical cues) can force us to expect critical detachment, and historical excavation can come with a hefty price tag of cultural superiority. It wasn’t until the final third of Sabu’s stylistically bold, narratively scattershot latter-day communist propaganda that I realized it was neither a precocious reimagining of an outmoded fictional genre, nor a purposely grotesque dramatization of political failure, but rather an earnest modern call to arms.

Though steeped in cheeky asides and occasional anachronisms, the film mostly remains a period piece, and a largely unironic celebration of socialist action. Whether this has any effect on the viewer whatsoever will quite obviously depend on her or his predilections. The fact that Sabu made Kanikosen because Japanese youths have rediscovered Kobayashi’s story through a recent manga adaptation (the success of which many are quick to attribute to current economic recession) gives the whole thing a whiff of opportunism rather than of personal conviction. Yet even as his reasons for making the film remain both culturally transparent and ideologically muddy, there’s no denying that Sabu has ultimately fashioned a fluid, persuasive ode to revolt.

With its initial forced dark comic set pieces and perfectly lit set design, however, Kanikosen seems as though it will drift off, awash in alienating tonal inconsistencies and desperate cartoonish antics. Ryuhei Matsuda (the object of lust from Oshima’s Gohatto) is Shinjo, at first just one of many faceless, and mostly nameless, workers toiling away in the massive hull of a crabbing ship, which also doubles as a canning factory; with its wretched underlings working amidst gigantic grinding gears, imposing steam pipes, and massive levers, Kanikosen often strikes visually as Potemkin by way of Metropolis, splashed with occasional crimson reds, thanks to piles of oddly lustrous crab shells standing out amidst the cold blue steel. Shinjo soon incites his miserable fellow workers, often subject to horrific beatings by the sadistic, company-appointed foreman Asakawa (Hidetoshi Nishijima, handsome but for a perfectly placed scar slashed from his left eye to his cheek), to free themselves from enslavement through pact suicide. Their buffoonish attempt to die en masse, nooses tied around each of their necks, shot and acted like a blackout comic sketch (although the source of the humor here is difficult to discern), is thwarted when the ship heaves left and right, their toes never quite able to rid themselves of the sliding boxes perched below them. As the men find their footing, so does the film.

Shinji escapes the ship, along with a fellow cannery worker, and is picked up by an enemy Russian vessel (their rescue is shot with beautiful, almost Spielbergian grandeur, as the ship emerges out of the fog, stunning back light shining down on Shinji’s tiny boat from above). Shinji’s predictable discovery that the Russians live in evident borderless, classless paradise, typified by buffets of food and sprightly Cossack dances, leads him to heroically return to the crab ship and rabble-rouse the crew into striking and standing up to the evil Asakawa—who in the meantime has killed an escaped and captured crew member.

At this point, Sabu’s overly emphatic lighting and almost cartoonish, colorful art direction begin to feel more in the service of its broadly captivating narrative. The sight of exploited, beaten-down men slowly becoming conscious of their social nonstatus carries a thrilling charge. Unsurprisingly, Sabu decelerates considerably by indulging in slow-motion climactic turnarounds and tragedies, yet these melodramatic flourishes are infinitely preferable to the wild-eyed absurdity of the first third, overflowing as it was with sudden flashbacks and dream sequences. What initially seems like historical burlesque becomes vivid and honest, unafraid of coming across as naïve or overly idealistic in its politics or aesthetics. And for those who might dismiss Kanikosen as automatically dated, imagine for a second a new American film version of Upton Sinclair’s The Jungle (Linklater came close with portions of his sadly undervalued Fast Food Nation). That 1906 agitprop novel’s power and core of truth would outshine questions of “relevance,” and might be more thrillingly political than anything being made right now. It’s doubtful that Kanikosen, visually and narratively beholden to Japanese graphic novel trends, could make any significant political impact, perhaps, but beneath its wild contortions lies a beating heart after all.