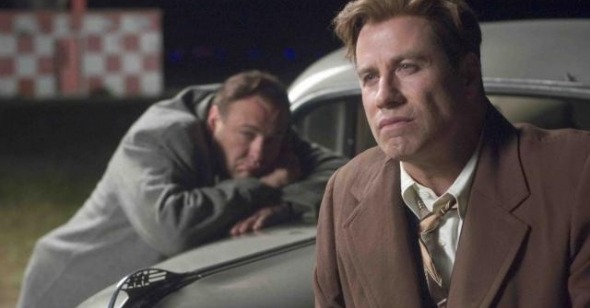 Lonely Hearts revisits the story of Martha Beck and Raymond Fernandez, tabloid darlings who spent 1948 exploring America, leaving a trail of scammed or slaughtered divorcees, widows, and spinsters behind them. Flimflam romeo Ray was just doing his old serial seduction thing, picking marks from their personal ads, but teaming with hard-luck girlfriend Martha, who posed as his sister, raised the stakes of his confidence game considerably; they eventually went to the chair in Sing Sing convicted of three murders, ostensibly connected to 20. Writer-director Todd Robinson‚Äôs film inexplicably brings together a bevy of bankable names around the case, with Salma Hayek and Jared Leto as Beck and Fernandez, and John Travolta and James Gandolfini as Detectives Robinson and Hildebrandt, a pair of Long Island detectives drawn onto their case.

The Beck-Fernandez killings, which launched a thousand headlines in their day, have been filmed more than once already, most notably as 1970‚Äôs Guignol The Honeymoon Killers, with fat Brooklyn-born harridan Shirley Stoler playing a Beck significantly closer to the dowdy truth (you couldn‚Äôt really call Robinson‚Äôs film a romanticizing of the case‚ÄĒHayek‚Äôs characterization is monstrous‚ÄĒbut it does doll up the personnel a bit). Lonely Hearts‚Äô original ‚Äúangle‚ÄĚ comes in its paralleling Beck-Fernandez‚Äôs grandly dysfunctional fumbling at domesticity with Det. Robinson‚Äôs own clumsy attempts to reconstruct his fragmented personal life‚ÄĒhis wife commits suicide over the opening credits, and he has a strained-to-breaking relationship with his young son‚ÄĒmatching two damaged family units pushed to the outer limits of alienation by what they‚Äôve done and seen, compelled even at the torturous extremity of their circumstances to imitate normalcy. Martha, seeking a palpable note of permanence and fidelity in an existence built around perpetual Don Juan-ism, is suddenly stricken with the desire to settle down and have a baby, as if picket-fence redemption is still possible with her and Ray a few dead bodies past the point of no return.

It could be the premise for a great Nick Ray picture, but though Robinson‚Äôs division of screen time between the fugitives and their pursuers seems to come from the most honorable of motives (Travolta is playing the director‚Äôs grandfather, who worked on the Beck-Fernandez case), he never manages to open a dialogue between the storylines before they converge, and over-reliance on Gandolfini‚Äôs narration suggests the director was out of his depth. The filmmaking is confident, if anonymous, throughout‚ÄĒthe air of two-and-a-half-star mediocrity is unmistakable‚ÄĒthough the taciturn Travolta chapters fare worst, lacking even the trace of outlaw tawdriness that gooses the scenes between Hayek and Leto. Material surrounding Travolta‚Äôs solemn, incognito office romance (Laura Dern) and station house roughhousing is utterly rote; there‚Äôs one good visual gag that plays on the mismatched weight classes of Gandolfini and Scott Caan‚Äôs prick inspector when they start to mix it up, but the rest is obligatory macho put-downs (‚ÄúI fucked yer muddah,‚ÄĚ et al.)

As for Fernandez and Beck, in a story that offers access to the entire dreamlife and romantic ideals of a distant decade, we have to settle for scurrilous True Crime; Lonely Hearts‚Äô title may recall Nathaniel West, but the ideas are strictly straight-to-video. Leto, between his receding-hairline getup here and his bulked-up Mark David Chapman in the upcoming Chapter 27, seems to be dead-set on selling himself as an important actor through attention-getting chameleonic parts‚ÄĒbut though his pouty fronting of a smeared-eyeliner tween rock outfit makes him an easy punchline, this film‚Äôs only real pathos comes by way of his tatty, low-rent gigolo. Ray‚Äôs morally retarded wakeup, long after Martha‚Äôs violent possessiveness has irretrievably sucked him into its undertow, is communicated through tiny winces of crushed clarity; it‚Äôs a sharp piece of characterization set amidst utterly dull surroundings.