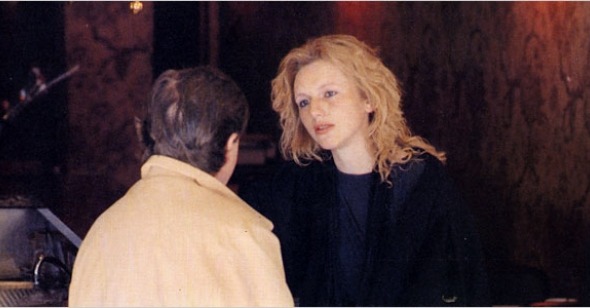 J‚Äôentends plus la guitare (I Can No Longer Hear the Guitar)
Dir. Philippe Garrel, France, 1991, The Film Desk

Is Philippe Garrel ready to ‚Äúbreak‚Äù in America‚Äîor, at least, New York? Last year‚Äôs limited release of his opus Regular Lovers was the first stateside distribution he‚Äôd received in four decades. Nobody got rich off it, but for the cabal of film obscurantists it screened to, it was an unquestionably major document. Like his contemporary Roberto Bola√±o‚Äôs The Savage Detectives, it was a ‚Äúlove letter‚Äù to the generation who came of age in the late Sixties and Seventies, accomplished with romance, poignancy, and the sociohistorical breadth of a 19th-century novel (that it‚Äôs a generation that‚Äôs treated itself to far too many eulogies already does not, I should say, diminish the art).

Now BAMcin√©matek curator (and longtime Garrel booster) Jake Perlin‚Äôs nascent distributor Film Desk is giving the director‚Äôs J‚Äôentends plus la guitare (I Can No Longer Hear the Guitar) a long-deferred run. It‚Äôs a chancy gamble‚Äîbut the until-recent obscurity of Garrel‚Äôs name stateside, his ever-modish sullenness, and his impeccably hip references/collaborators (Cale, Godard, Jean Seberg, Nico) might seem to favor a new generation of kids pretending they‚Äôd known about him for years (this is the best-case scenario).

Further evidence that the Nineties might be the greatest film decade: Guitar was finished in 1991, three years after the mausoleum-throated Teutonic chanteuse Nico plopped off her bicycle in Ibiza, dead (keeping an appointment, by most accounts, she‚Äôd had for some time). Garrel had spent most of the Seventies with her. Their bodies of work from their time together are inextricable: the cover of her album Desertshore is a still from Garrel‚Äôs monumentally inhospitable La Cicatrice interieur (The Inner Scar), in which she and her music prominently feature, alongside the director himself. Together they‚Äôd blackened spoons, stabbed veins, and creatively malingered in slag piles of medieval dolor and post-plague barrenness.

They met sometime in ‚Äô68, ‚Äô69, we‚Äôll say. He was a prodigy, having turned out a near-masterpiece by age twenty (the mythopoetic house-of-horrors Le Lit de la vierge, which uses her ‚ÄúThe Falconer‚Äù). She was ten years his senior, and had been making the scene forever‚Äîtripping through La Dolce vita, recording with the Velvets, and basically being the Forrest Gump of ‚Äúcounterculture‚Äù starfucking, notching affairs with Bob Dylan (who wrote ‚ÄúI‚Äôll Keep It With Mine‚Äù for her), Jackson Browne (ditto ‚ÄúThese Days‚Äù), Lou Reed (to whom she granted the legendary dismissal ‚ÄúI cannot make love to Jews anymore‚Äù), Jim Morrison, Tim Buckley, Alain Delon (with whom she had a child in 1962), Iggy Pop (whom she allegedly gave the clap) . . . Garrel seems to have taken her more seriously than the aforementioned. He seems to take most things rather seriously.

Garrel often plays himself in his autobiographical films. His screen presence is near nullity‚Äîthe heavy head hangs; he speaks in quiet monotone, barely moving his lips; his posture is loose, as if nodding; his gaze is disconcertingly intent. In Guitare, however, that demeanor is channeled by Beno√Æt R√©gent, playing ‚ÄúGerard,‚Äù opposite Dutch actress Johanna Ter Steege as the Nico stand-in, Marianne.

Gerard and Marianne are on a limbo vacation amidst the tumbling slopes of postcard Positano, staying along with artist Martin (Yann Collette) and his girlfriend, Lolla (Mirielle Perrier). The stereotyped image of the Bay of Naples as a plein air paradise of purgative light is inverted; everything is shot in blue, dusky offseason light (I can scarcely think of a diegetic electric light source in the movie, and many key scenes occur in near-darkness). The tide rasps in the background, and the four drift in a Sargasso of lassitude.

There are no identifying period markers in his film in memoriam‚Äîother than a general sense of self-explorative indulgence that we associate with the late Sixties, that is. The only cultural signifiers are books of poetry. Everyone is sedated, rarely seen standing, occupying underlit, underfurnished rooms, against a canvas of fresh, cool white linens. Eyes locked, sinking into one another, they pontificate on the love they‚Äôre living or losing. The dialogues are by Marc Cholodenko, a little-translated French poet and novelist with whom the director has collaborated on screenplays since 1989. There‚Äôs a lot of meandering, stoned talk, and little wordplays based around in Marianne‚Äôs fragmentary French.

Garrel, who cuddles his camera into the snuggest of intimacies, places paramount importance on the close-up and, in effect, its limitations. A key line, from Martin: ‚ÄúI‚Äôm too close to you to even be able to look at you.‚Äù The director‚Äôs produced an entire film out of loose ends, scrutinizing female faces in silent repose, which seems the quintessence of his cinematic experiment: how much can you extract from looking hard? (Collette, whose visage is half-collapsed around a glass eye, is fascinating to guiltlessly stare at.)

Return to Paris. Drugs are implicit from the beginning‚Äîwhat else inspires people to slump in naked, twilight cells?‚Äîbut now heroin comes in. Gerard, deceptively passive and near-incapacitated when he bottoms out, eventually proves himself a proper heir to a lineage of unrepentantly asshole-ish leading men of the French art house (see Messrs. Eustache, Pialat...). ‚ÄúAfter tomorrow, will you still be around?‚Äù Marianne‚Äôs young boy, raised in another house, asked of Gerard. He says yes; the kid‚Äôs never seen again. She breaks Gerard‚Äôs heart; he spreads his pain around. There‚Äôs a procession of fucks with memorable faces. A casual thing with Linda (Ad√©la√Øde Blasquez, dark, sternly middle-aged). His clean-up savior Aline (Brigitte Sy, savage, beak-faced, either homely or gorgeous; the mother of Garrel‚Äôs child, Louis), who just‚Äîappears‚Ä¶ and then a baby just‚Äîappears. By which time he‚Äôs off fucking young Adrienne (Anouk Grinberg), while Marianne‚Äôs gone and buried, and that‚Äôs all there is to it. Has it been a year? Five? Two decades?

This all gets at the feeling that comes when waiting to fall asleep and remembering people you used to know. To judge from his films, Garrel seems a profoundly disappointed person; disappointed in the Gaullist re-election, in old love affairs, and generally in the world as it is (one so inclined could see this as a symptom of very early success). Regular Lovers, which documents the respective deaths of political and romantic idealism, is in the company of Jack London‚Äôs Martin Eden as autobiography in which the author seems to indulge a fantasy of his own suicide. I‚Äôm working from a fractional view of his filmography, but an ascetic strain runs through Garrel‚Äôs movies, which speaks of someone who‚Äôs in the habit of refusing the world‚Äîthough maybe he just likes a blank backdrop against which to put a pretty girl in relief.

The disappointment in Guitare seems to stem from the realization that you‚Äôve come too far along to backtrack into the identifiable moment where things were right (the pat finality of death has that effect). Prog-fusion jazzman Fran√ßois ‚ÄúFaton‚Äù Cahen does a superlative soundtrack, which often suggests obscure menace‚Äîand so is all the more moving when it unexpectedly breaks into slippery, sentimental fiddle and gamboling piano, as Gerard opens the door on Marianne, returning home to give things another try (‚ÄúIt‚Äôs time for a kiss‚Äù). A cut; kneeling before his seated beloved, he contentedly presses his lips to hers‚Äîand then the clatter of her piss hitting water interrupts.

I haven‚Äôt seen anything in movies that affects me quite this way: it is rude and ridiculous and really real. It‚Äôs the old harmony that Garrel‚Äîor Gerard‚Äîcan‚Äôt forget, which underlays everything after (from Martin Eden: ‚ÄúA man who has found the path to the hidden temple but has not followed it; who has, perhaps, caught glimpses of the temple and striven afterward to convince himself it was only a mirage of foliage‚Äù). So: is the title just wishful thinking?