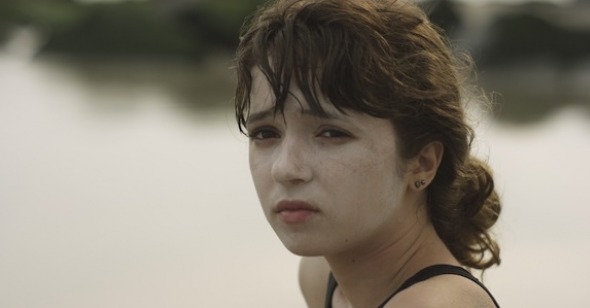 There’s a great risk that comes with truly intimate cinema. Eliza Hittman’s feature debut brings us so close to its young subject—and to the very sexual core of adolescence—that it seems to put both her and the audience in a kind of constant peril. This risk is also the beauty of It Felt Like Love, which eschews coming-of-age conventions in favor of a chain of immersive moments, not bothering to put us at ease during any of them. In dramatizing what probably amounts to only a few, crucial weeks in one girl’s life, the film evokes an entire, authentic world of teenage pathology. Rarely does a movie so fixated on flesh and body mortification feel so completely interior.

Working with cinematographer Sean Porter, Hittman palpates the edges of the fragile, tiny universe of virginal South Brooklyn teen Lila (Gina Piersanti) with a mixture of great tenderness and purposeful discomfort. At first all we see of Lila are her back and the black straps of her bathing suit crossing it like an armor about to be pierced. The camera position and gently calibrated lens work are so expressive that, even from this shot, we feel we already know the girl as she stares out at the waves. With her face caked in unblended white suntan lotion, the thoughtfully expressionless Lila looks like a fragile doll; Piersanti even resembles Giulieta Masina in La strada during these early moments, a mask of innocence waiting to be cracked (Hittman will close the film with a striking visual rhyming of this mask-like visage). It’s summer in sweltering New York, the Gravesend section of Brooklyn, and Lila is whiling away the hours with her closest friend, Chiara (Giovanna Salimeni), and Chiara’s boyfriend, Patrick (Jesse Cordasco). A third wheel constantly forced to encounter the canoodling of the other two, the sexually frustrated Lila seems a spiritual cousin to Anaïs of Catherine Breillat’s Fat Girl; her emerging libido, coupled with the hypersexual culture surrounding her, sends Lila on a quest to become a sexual being.

Motherless, raised by a seemingly intentionally befuddled single father, Lila thrusts herself into a sexual world barely navigable for a girl of so little experience, beset as it is by ravenous, slightly older men. The unsettling twist of Hittman’s film is that Lila is not corrupted by any tangible other, but constantly puts herself into compromising, potentially devastating situations; she is even constantly, if half-heartedly, rebuffed by the college-age object of her affections, the dreamy if thuggish local boy Sammy (Ronen Rubenstein). A tattooed, blue-eyed pothead rumored to be willing to “fuck anything,” Sammy nevertheless seems to know enough not to get involved with an underage girl like Lila. This doesn’t stop Lila from inserting herself into his rough-hewn circle of boys, whose behavior toward the persistent girl grows increasingly degrading.

Whether Lila is ever in true danger in the presence of these older boys is one of the film’s recurring, discomfiting ambiguities. Indeed, part of the film’s effectiveness exists in the sometimes barely perceptible line it draws between “bad” and normal behavior, on the part of the boys and girls. It Felt Like Love could have been another lock-up-your-daughters cautionary tale à la Thirteen, but is instead remarkably nonjudgmental. The film’s lack of moralizing extends to its highly empathetic camerawork; keen, unemphatic editing; and especially its score-less soundtrack (a truly refreshing choice in an American indie landscape long burdened by chintzy guitar noodling and piano treacle). There is a preponderance of bared underage flesh in Hittman’s film, but none of it feels gratuitous or lasciviously displayed. The skin here isn’t supple but vulnerable, exposed but not eroticized. That the most confrontational and explicit nudity in the film is of three flaccid, desexualized penises, flashed directly to camera, says a lot about Hittman’s refusal to play by the rules.

With its oblique yet unashamed view of sexuality, lack of hand-wringing, and intimate, caressing camerawork, It Felt Like Love feels like the work of a proto Claire Denis or Olivier Assayas, rather than reminiscent of the less visually acute, more garrulous roster of today’s American independent filmmakers. It’s thrilling to see such perspicacity visited upon contemporary New York’s outer boroughs. Hittman, who was born and raised in Flatbush, Brooklyn, makes the environs of Gravesend enveloping and familiar. This sense of authenticity is aided immeasurably by the performances Hittman elicits from a young cast of either nonprofessionals or first-timers, most recruited from areas around South Brooklyn. Though many of them are clearly amateur, the director smartly utilizes their insecurities, harnessing that special performative quality that teenagers have, when they’re in the process of constructing their own identities. Salimeni is particularly strong at navigating some emotionally difficult paths as she both supports and is turned off by her slightly younger best friend. Meanwhile, Piersanti holds the film together with her glassy gaze. At one point Sammy tells Lila she looks different every time he sees her, and indeed the actress seems to morph from scene to scene, from elfin innocence to weathered, mature woman. By the end of the film, a transformation—in a sense, a death—has taken place, perfectly expressed in the sound of a girl’s music box tinkling out Ravel’s heart-wrenching “Pavane for a Dead Princess.”