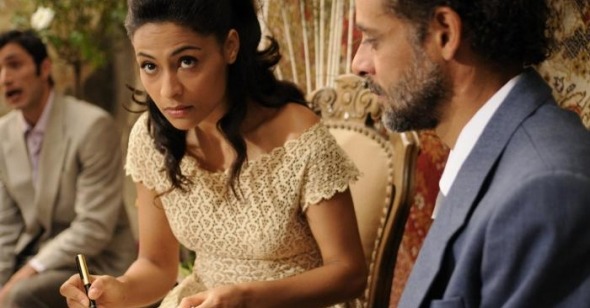 “He starts with the image,” Jean-Luc Godard once said of Brian De Palma. Replace “image” with “sensation,” and you have Julian Schnabel. A rapacious, mercurial stylist, the painter-cum-filmmaker has over the years rarely hesitated to sacrifice storytelling coherence in favor of soaking in his characters’ vertiginous emotional states. Consider the plot of his 1996 debut, Basquiat, coming to a halt as the eponymous artist bicycles around the Lower East Side to the Psychedelic Furs’ “India,” as if floating on a cloud of marijuana smoke. Or the soundtrack switching from diegetic nightclub music to the lyrical orchestra swelling inside Reinaldos Arenas’s head as the Cuban poet loses himself in dance with a lover in Before Night Falls. Or the thoughts and emotions rushing through paralyzed Elle editor Jean-Dominique Bauby, made palpable as glimpses of calving glaciers and throbs of old Georges Delerue scores in The Diving Bell and the Butterfly. In Miral, Schnabel’s fourth feature film, this pursuit of tangible sensory flashes leads the director to blur the edges of the screen in order to visualize a character’s intoxication as she steps out of a tavern. When the effect arbitrarily reappears a few scenes later to evoke not much of anything as the same character is sent to jail, however, we come to the grim realization that the haziness may be emanating less from the people on screen than from the self-besotted auteur behind the camera.

Miral’s credits sequence gives the impression that Schnabel is trying to rein in his assertive tendencies and put the film’s topic ahead of his own greedy eye: the words roll over images of maps of the Middle East as somber strings weep on the soundtrack, a sharp contrast to the striking blend of x-ray negatives and Charles Trenet crooning that kicked off The Diving Bell and the Butterfly. The promise of aesthetic sobriety dissipates as soon as the bobbing and weaving of the first scene’s handheld camera segue into the tinted filters and canted angles of the second, though the notion of addressing a Very Important Subject continues to the end. Said subject is the Palestinian cause, envisioned as a perspective-shifting mosaic of female solidarity and sorrow that reaches from 1947 to 1994. Depicting a yuletide party celebrating the inception of Israel under the British Mandate, the opening sequence gets a mild shot of extratextual oddness from cameos by Vanessa Redgrave (whose “Zionist hoodlums” speech at the 1978 Oscars has long been met with accusations of anti-Semitism) and Willem Dafoe (whose role as a concentration camp kommandant in Paul Schrader’s Adam Resurrected surely counts as one of the actor’s most alarming recent appearances). But authentic confrontation is not on this timid picture’s agenda. Miral is interested in reconciliation, specifically the careful, nobody-gets-offended kind from supposedly hot-button but really middlebrow, awards-hungry releases that forever aspire to turn minefields into drawing rooms.

Also in the introductory Christmas soiree is Hind Husseini (Hiam Abbas), the founder of the Dar Al-Tifel refuge for Palestinian orphans and the first of the four female characters whose interconnected stories give the movie its form. A stately matriarch dedicated to non-violent resistance and old-Hollywood saintliness (“No, but I have 2,000 daughters” is her Goodbye, Mr. Chips–worthy response when Dafoe’s benign American military officer asks if she ever married), she lends the diaphanously structured screenplay, adapted by journalist Rula Jebreal from her own autobiographical novel, the closest it has to an anchor. Though saddled in later scenes with a powdered granny wig and enough doleful solemnity to make Irene Papas green with envy, Abbas brings shades of conflict and life-worn dignity to a character that’s used as little more than a humanitarian totem to be contrasted with the other, more forceful protagonists who follow. As the film skips ahead to the late 1960s against the background of the Six-Day War, the narrative thread is passed on to abused runaway and self-destructive odalisque Nadia (Yasmine Al Massri) and nurse-turned-terrorist Fatima (Ruba Blal), who, while sharing a penitentiary cell, are filmed side by side as if to embody the respectively apathetic and radicalized sides of the nation’s next generation.

Despite schematic thematic trappings and misguided filmic choices—including a ticking-bomb sequence set in a theater that, by bluntly referencing Gillo Pontecorvo’s Battle of Algiers, merely brings attention to its own insufficiencies as a political tract—this section has enough vignettes of rough-edged humanity to suggest that subplots such as Nadia’s wobbly relationship with haplessly pious Jamal (Alexander Siddig) might be fruitfully expanded into narratives of their own. But then we get to Miral herself, whose story covers three-quarters of the film. As Nadia’s teenage daughter, a Jerusalem schoolgirl torn by the turmoil of the First Intifada between Husseini’s pacifist teachings and the militant engagement of a hunky boyfriend (Omar Metwally), Freida Pinto offers superb bone structure and a handful of variations of wide-eyed petulance, but not enough emotional mobility to conceal the void where the picture’s central quandaries should be. It’s not entirely the actress’s fault, however, that her character is sketched in Jebreal’s screenplay as a cross between plaintive witness to the area’s injustices and the world’s most photogenic bomb-planter, surrounded by declaratory dialogue so stilted that it sounds dubbed (“This is a very crucial moment for our country,” “This is a difficult period of transition”).

Where is Schnabel in all of this? Everywhere, lamentably. Not a man known for his austere canvases, he nevertheless found concentrated focus in the claustrophobic setting of The Diving Bell and the Butterfly, really a prison film in which the main character’s eye becomes a two-way keyhole. With that focus diffused by Miral’s sprawl of decades and protagonists, Schnabel’s stylistic flourishes (solarized hues, abrupt close-ups, the inevitable Tom Waits dirge) rattle around like the proverbial “necklace without a string” described in Vincente Minnelli’s The Bad and the Beautiful. There’s scene-by-scene technical wizardry in how DP Eric Gautier keeps finding new, off-center ways for light to enter the frame, or in the glints of abstract color that pop up unexpectedly in compositions of saloons and beaches. But because Schnabel can connect only superficially to these characters’ struggles, his stabs at immersive impressionism come off as gauzy next to the films of Claire Denis or Michael Mann, where the lyrical-ominous camera feels directly linked to people’s pulses. In the end, Husseini’s orphanage is presented as the protagonist’s crowning achievement, not unlike Basquiat’s paintings, Arenas’s poems, and Bauby’s autobiography. It’s a lukewarm, can’t-we-get-along gesture. Think of how much more interesting and dangerous the film might have been if it had the perversity to posit the idea of the artist not just as anguished outsider but as terrorist, contemplating (and perhaps even flirting with) a less gallant character’s aestheticism of her own radicalism, à la Schrader in Mishima. But that’s clearly not an idea for Schnabel, who’s here a well-intentioned tourist applying style to the screen like smeary paint on glass.