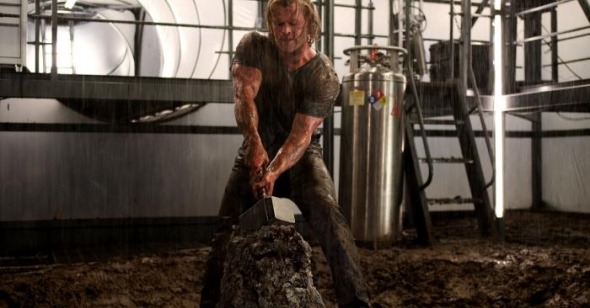 When in 1994 I saw Mary Shelley’s Frankenstein, in which then powerhouse Brit hyphenate Kenneth Branagh stripped himself to the waist, offering up his newly buffed and broad-chested torso, and proceeded to writhe around with a body-suited Robert DeNiro on a floor covered in slick puddles of birthing goo, I realized we were no longer dealing with just the world’s foremost Shakespearean auteur. “Superheroes Are the New Shakespeare” read a scary Gawker headline today—but the turtle-faced writer-director-star and former Emma-Thompson-and-Helena-Bonham-Carter beau used to prove the opposite. His Henry V, his Hamlet, even his Benedick in Much Ado About Nothing, are nothing if not triumphant, virtuous, athletic, romantic—stopping just short of superhuman. They prevail in the Battle of Agincourt and conquer saucy love interests, and even that fussy, withering melancholy Dane cuts a robust figure as he heroically parries and thrusts with Laertes, even sending his foil sailing across the room with a distinctly supernatural force.

So, though at first it might seem odd that Branagh has been placed at the helm of the new 3-D Hollywood blockbuster Thor, by Odin’s raven, I think it works! And not just because the mighty Thor gets a shirtless scene almost as gratuitous as Branagh’s in that hoary monster movie: as the titular thunderous God, fallen to Earth from the goofily grand and very vertical realm of Asgard, Chris Hemsworth rages and bellows like no one since Branagh’s Hamlet at the end of Act Three. With his digitally enhanced baby blues, Tom of Finland–approved V-shape, and fashionable facial scruff, this lummox would seem to be an impenetrable Conan type, but Hemsworth makes him a serious sweetheart: even when tossing a room full of emergency room doctors around like rag dolls, you can’t help but root for the guy. He just wants to please his dad (Anthony Hopkins as Odin), who has cast him out for his serious temper tantrums, and he’s likeably not pleased when he has to take revenge on his brother (Tom Hiddleston as Loki) for siding with the villainous Frost Giants (the evil head of which is acted by Colm Feore channeling Tim Curry from Legend) in a battle royale for the future of Asgard. Stripped of his powers and biding his time in a tiny New Mexico town that looks like it consists of one dusty block (perfect for the spaghetti-ish showdown between hunk-of-man Thor and a hunk-of-metal colossus), Hemsworth turns out to be a real stand-up guy, charming as he smashes coffee mugs with pleasure and grunts to the waitress for more drink.

It’s probably silly to have even invoked Branagh at all, since Thor often feels like any other perfunctory Hollywood film by committee. One could recoup the swoopy, canted camera craziness as “so Branagh,” but it looks like it could have come from any mindless post-Raimi concoction of the past decade of Marvel messes. But there is a somewhat beguiling playfulness here, and not even the leaden overbaked levity of Natalie Portman as unworthy love interest and scientist Jane Foster completely dampens Thor’s all around good spirits. —MK

I was about to gently chastise you, Michael, for attempting to place an auteurist gloss upon this mildly pleasant and instantly disposable extended trailer for an even bigger and louder movie to come, but you have headed that charge off at the pass. Actually, I myself would like to ascribe some Branagh-ness to this mighty (silly) saga, less in the case of visual style (who knows who shoots what for these concoctions?) than performance style. The genuinely amusing bits of business with our burly Asgardian learning the intricacies of basic human etiquette—interspersed with sharp little verbal jabs and nicely turned line readings from de rigueur indie It-Girl (the very pleasant Kat Dennings), the happily (and eternally) slumming Stellan Skarsgard and a surprisingly spry Portman (methinks you are a trifle harsh on the lass)—bespeaks a director who knows his way around a pentameter. There’s a nice, ceaselessly brisk rhythm to the earthbound cast’s back-and-forth (never mind all that heavy verbal lifting in Asgard, whose rainbow bridge resembles a fondly remembered level of Super Mario Kart) that creates not just laughs but a bit of genuine warmth towards these happily mugging pros. Mr. Hemsworth, meanwhile—who previously made a memorable impression as the scary hitchhiker in the great A Perfect Getaway—is every bit as endearing as you suggest; I only hope that he can dial down his enviably ridiculous physique for future roles to avoid the C-level fate of such comparable behemoths as Dwayne Johnson.—AT

Andrew, having just watched our beloved Mr. Johnson strain to lug his now-less-than-aerodynamicized bulk though Brazil in Fast Five, I agree that Hemsworth should consider streamlining himself for future roles. Maybe he’ll even show the knack for light comedy that Christopher Reeve cultivated in the wake of Superman, and damned if I wasn’t reminded of Richard Donner’s loveable mess while watching Thor—in both films, the sheer sententiousness of the off-world palace intrigue makes the Earthbound hijinks seem more appealing. I too enjoyed Hemsworth’s bellowing interactions with Dennings, Skarsgard, and Portman (obviously cast because she makes her costar look like an authentic titan just by standing next to him), and would like to add a word of praise for Tom Hiddleston’s Loki—an impressively self-divided villain by summer movie standards. The scene where he descends from his chintzy CGI Elsinore to visit his exiled brother contains some nice grace notes of regret, and so I’m glad that (SPOILER ALERT) it looks like he’ll be back in The Avengers. The Internet also tells me that Joss Whedon’s upcoming film is also the reason why Thor features approximately 90 seconds of (an unbilled) Jeremy Renner crouching on a rooftop in the rain holding a bow-and-arrow—it’s to hype his upcoming appearance as Hawkeye. Ain’t it cool? —AN