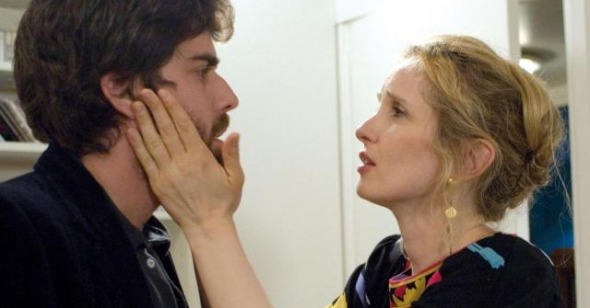 Take Me Home
By Michael Koresky

The unanimous acclaim for Richard Linklater‚Äôs Before Sunset, certainly high on the list of this decade‚Äôs small handful of American masterpieces, will engender a fair amount of good will towards Julie Delpy‚Äôs 2 Days in Paris. And not merely by association with that fine earlier film‚ÄĒDelpy was that film‚Äôs anchor, and so naturally and effortlessly did her indelible character C√®line‚Äôs world views, philosophies, agonies, contradictions, and neuroses float off the screen that it left little doubt that we were watching an approximation of the actress herself. The fact that she cowrote the screenplay with Linklater and leading man Ethan Hawke only compounds the nagging verisimilitude of the character‚ÄĒas does Before Sunset‚Äôs real-time shooting style, which heightens the film‚Äôs near documentary feel.

2 Days in Paris goes a long way toward exposing the challenge of trying to separate Delpy from C√®line as a fruitless one. Even though Delpy consistently tries to create a critical distance from this film‚Äôs far more intentionally obnoxious character, Marion, many of C√®line‚Äôs little details and traits pile up around her‚ÄĒas in Sunset, she praises her ‚Äúkitties‚ÄĚ; she works as a photographer, which recalls C√®line‚Äôs absent war photojournalist boyfriend; and she even reiterates, in a more overt visual flashback, one of Sunset‚Äôs most charming moments: Delpy‚Äôs recalling that as a child she would become so entranced by the wonders of the world (pinecones, light shining off of a tree‚Äôs leaves) that she would be driven to disarming distraction, getting lost on the way to school‚ÄĒhypnotized by beauty, and therefore an example of natural beauty herself. Doubtless this is taken from Delpy‚Äôs reminiscences of her own childhood experience; yet hearing it again onscreen is something akin to having a friend mistakenly telling you the same anecdote twice as a means of ingratiating himself to you. What was once off the cuff now seems overly rehearsed, even disingenuous.

Besides this, Delpy‚Äôs feature directorial debut could hardly be called a recycling of the Sunrise/Sunset films, although many reviewers will be tempted to do so since the film, like Linklater‚Äôs, focuses predominantly on two characters, Delpy‚Äôs Marion and Adam Goldberg‚Äôs interior designer Jack, who spend a limited amount of time in an unfamiliar (to him) European city. Narrative or stylistic similarities end there, as Delpy announces her work as thematically and emotionally in opposition to those films‚ÄĒwhere Linklater was interested in sense-heightening instances of human interaction, the gifts and ravages of time, the delicacy of living in the moment, Delpy is unapologetically crass, structurally clumsy, and cheerfully indelicate. If Linklater‚Äôs guiding force was Eric Rohmer, Delpy seems to be more stuck in the functionality of contemporary French comedy. Often, Delpy will go the farcical route, trying to get at honesty through clumsy situational humor. Though it‚Äôs unfair to prize one approach over the other, there‚Äôs no doubt that 2 Days in Paris is often leaden and certainly less engaging than one would expect, not to mention poorly lit and spatially disorienting (if Delpy‚Äôs intention was to visually demystify the romantic persona so carefully honed in her earlier films, then job well done‚ÄĒshe often makes herself look haggard).

As the film‚Äôs glib opening English voice-over signals, this is an altogether different beast from Sunrise/Sunset‚ÄĒLinklater strictly forbade hearing characters‚Äô interior monologues. Marion and Jack have been together for two years, a frightening fact for both of them, and he is meeting her parents (played by Delpy‚Äôs real mother and father, natch; they had also made charmingly brief appearances as C√®line‚Äôs neighbors in Before Sunset) for the first time. This is really just a bare framework on which to hang Delpy‚Äôs ruminations on the state of the world and the mysteries of sexual relationships, resulting in jokes about terrorism and French penis size (smaller than Americans, so says Delpy). The beetle-browed Goldberg, whose mind-bogglingly self-conscious mannerisms have in the past made Jeff Goldblum‚Äôs obsessive otherworldliness seem downright restrained (his every line reading in the otherwise unassuming rom-com indie All Over the Guy was a compendium of disinterested tics), makes for a pretty poor romantic lead, let alone a substitute for the always engaged Ethan Hawke.

Though 2 Days in Paris purports to ultimately be an Annie Hall‚Äďish elegy to lost relationships, Delpy and Goldberg cannot create enough of a poignant interaction to make their falling apart matter. And after a simply disastrous third act (it would be too enervating to go into the muddled details of the narrative‚Äôs hysterical disintegration), Delpy just seems to give up, even cutting out the sound of Jack‚Äôs final soul-bearing monologue and lazily overlaying it with her own voice-over closing thoughts as a means of summary. It‚Äôs an especially strange strategy for Delpy, who seems to announce herself, onscreen and off, as an investigator of the vagaries and quirks of language. Yet when the moment comes, words indeed fail her.