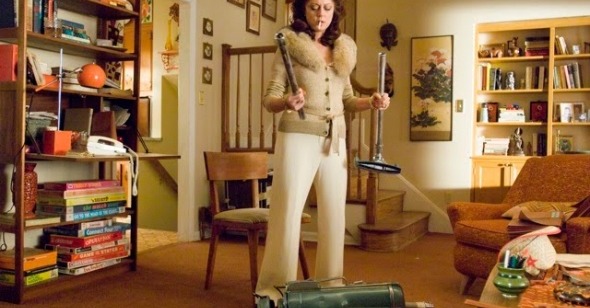 I never read Alice Sebold‚Äôs novel The Lovely Bones, possibly because I didn‚Äôt spend enough time in airport bookstores in 2002. So I can‚Äôt say whether or not Peter Jackson‚Äôs film version fails out of excessive reverence to its source material, or because it‚Äôs not faithful enough. But I can say with total confidence that it is a failure, and a conspicuous one at that. Arriving near the end of an Oscar season already flush with egregious offenders, from the glibly pandering (Up in the Air) to the earnestly dull (Invictus), Jackson‚Äôs film stands out in its strident commitment to bad ideas.

Take, for example, a midfilm montage in which the blowsy matriarch (Susan Sarandon) of a family struggling to deal with a severe trauma‚Äîthe unsolved murder of her teenaged granddaughter, Suzie (Saoirse Ronan)‚Äîarrives from out of town and stages a domestic coup. In narrative terms, the intrusion makes sense: she‚Äôs trying, in her own brusque way, to ease the burden on her heartbroken daughter (Rachel Weisz) and son-in-law (Mark Wahlberg), while they wait out an increasingly futile police investigation. Jackson, whose early features showed a real talent for switching tones (rewatch The Frighteners for its effortless blend of the silly and nightmarish), inexplicably frames the proceedings like outtakes from Mrs. Doubtfire, all kitchen slapstick and gently aggrieved reaction shots beneath aggressive pop music. By the time Sarandon is burning eggs on the stove and sweeping dirt under the rug (ah, visual metaphors), all we can do is watch the onscreen pileup with mute, rubbernecking horror‚Äîwhich, to be fair, puts us in a position similar to that of the film‚Äôs not-quite-departed protagonist.

This brings us to the central conceit‚Äîor gimmick‚Äîof The Lovely Bones: its omniscient, beyond-the-grave narration. Already the victim of a brutal crime, young Suzie has to suffer all over again in the afterlife by observing her family‚Äôs crippling grief. ‚ÄúI was 14 years old when I was murdered,‚Äù she whispers, and it‚Äôs hard not to be affected by the terse, tragic simplicity of this statement (although her comment that her disappearance occurred ‚Äúbefore they put pictures of kids on the side of milk cartons‚Äù is odd, as the film is set in the Seventies). The tension is hypothetically twofold: can Suzie navigate the strange space of the ‚ÄúIn-Between‚Äù (a liminal realm that reconfigures its lush CGI topography in accordance with its inhabitant‚Äôs emotional state) while simultaneously dropping clues to her family that her killer is actually the creepy, middle-aged bachelor (Stanley Tucci) next door?

One would like to think that they could have guessed the guy was a psycho based simply on his Ned Flanders mustache and predilection for casting menacing silhouettes against the living room window. Tucci‚Äôs sure-to-be-feted performance is little more than a collection of vocal tics and nervous stares‚Äîthe sort of thing that any talented actor could do. Still, the extended set-piece where he lures Suzie into an underground dungeon beneath a field‚Äîwhich we had previously seen him sketching out in a notebook so hilariously incriminating that we know it‚Äôll be found before the film‚Äôs end‚Äîis truly uncomfortable, partly because Tucci plays the botched seduction with conviction, but mostly on account of Jackson‚Äôs sweaty build-up, which is rendered all the more distasteful by his faux-austere decision to cut away at the final moment.

It could be argued that the entire film is engaged in a similar process of making the horrific dully palatable. A late revelation that Tucci is actually a serial killer (such a novel subject for a film!), with a half-dozen child victims strewn across several states, is accompanied by artful tableaux of muddied corpses. Grim stuff, but there‚Äôs no time to dwell on it, since Jackson immediately shifts his attention to another shameless suspense scene, involving the discovery of the Murder Diary by Suzie‚Äôs younger sister. The upshot of all this finds these discarded girls frolicking in sundresses in their screensaver paradise‚Äîoddly enough, Tucci‚Äôs first victim, a middle-aged landlady, is not among them, probably because she‚Äôs not a sufficiently heavenly little creature.

It‚Äôs an old trick: stirring up messy feelings and then choking them off via tidy sentimentality. If The Lovely Bones feels like something of a vanguard offender in this regard, it‚Äôs probably because Jackson‚Äôs investment in spectacle renders the flimsiness of the material all the more obvious. It‚Äôs tempting to write a laundry list of specific scenes that don‚Äôt work‚Äîi.e. Suzie ‚Äúpossessing‚Äù a proto-Goth girl so as to share an undead smooch with the cute Indian boy who had been waiting for her on the day of her murder; the choreography of Tucci‚Äôs apparently re-edited final moments, reminiscent of nothing less than Homer Simpson‚Äôs trip down Springfield Gorge. But the common denominator is the sensibility of a director who is obviously more at home with Orcs and giant apes. At this point, Jackson would seem to be detached from the particulars of drama‚Äîand the dictates of basic good taste‚Äîas Suzie is from the real world.