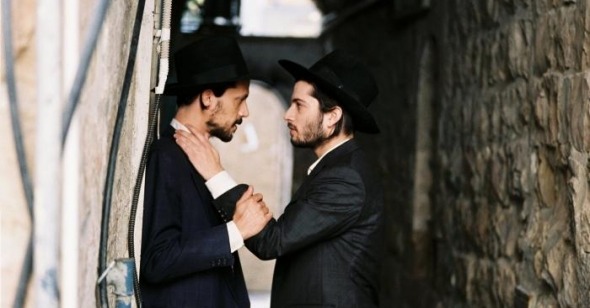 On the Butcher Block
by Michael Koresky

Most of the gay Israeli films that have made their way to the U.S. have seemed to prefer narratives of extreme conflict. Of course there have been exceptions (last year‚Äôs glib yet exceedingly hot romantic comedy Antarctica‚Äės only issues were, refreshingly, those of sex and commitment), but for the most part, they place their central homosexual couplings within larger political or social frameworks that make them seem like extraordinary challenges to embrace or overcome. So in Eytan Fox‚Äôs breakout Yossi and Jagger, it‚Äôs not just a clandestine gay love affair, but one enacted within the uber-masculine barracks and battlefields of the Israeli army, and Fox‚Äôs follow-up, The Bubble, depicts, with increasing histrionics, the romance between a Palestinian and his Tel Aviv lover. Being lovers cast out of the mainstream isn‚Äôt enough; here another dimension of repression and catastrophe is layered onto homosexual desire. Of course this is the stuff of classic melodrama‚ÄĒthe more odds the better‚ÄĒand it makes perfect sense in the context of a country constantly in turmoil.

Now here‚Äôs another to add to the growing subgenre of films about the two-pronged repression of gay Israelis: Haim Tabakman‚Äôs Eyes Wide Open, which situates its tenuous same-sex affair in the Orthodox community in contemporary Jerusalem. As one can imagine, much tortured hand wringing, heavy-breathing, and mezuzah-kissing ensues. Aaron (Zohar Strauss) is the thirtysomething son of a recently deceased butcher who has taken over his father‚Äôs shop. He hires a new assistant, the mysterious and undeniably hot yeshiva dropout Ezri (Ran Danker). At first he nimbly staves off the obvious attraction he has to Ezri by taking up what he perceives as a holy challenge and proudly resisting temptation. But not only is Aaron G-D-fearing, he‚Äôs also married (to a properly drab housewife, played by someone named, simply, Tinkerbell) with a couple of anonymous children, so the discovery of his eventual transgression is twofold, setting off reverberations at home and in the entire finger-wagging neighborhood.

Aaron‚Äôs ultimate decision to bed the teasing, more sensual and open Ezri‚ÄĒwhose sexual wickedness is what might have gotten him expelled from school‚ÄĒhappens rather abruptly, especially after his insistent, vocal Talmud interpretation that man should not enjoy life and abstain from pleasure, and that embracing life‚Äôs obstacles brings one closer to the almighty. (‚ÄúYou are a masterpiece,‚ÄĚ he tells Ezri. ‚ÄúA challenge to overcome.‚ÄĚ) But once he sees Ezri bending over a big Francis Bacon-esque slab of beef, all is lost: muted longing becomes passionate meat-locker lip-locking. And who can blame him? Ran Danker is flat-out dishy, and a lust object for any inclined viewer, regardless of denomination‚ÄĒunencumbered by too long or stiff a beard, Ezri goes for the more casual close shave. Plus his eyes are like pools of fresh chopped liver, and he has a tendency to unabashedly strip all the way down when bathing in the local holy spring. Sex trumps all‚ÄĒthe gloves (and yarmulkes) are off.

As in Yossi and Jagger and The Bubble, gay sex here remains redolent of the forbidden. Such strenuous restraint takes its toll on the audience, but thankfully Strauss and Danker make for enormously appealing leading men‚ÄĒeven the mismatch between steely, squat Strauss and model-pretty Danker works within the film‚Äôs circumscribed setting. Ultimately, Eyes Wide Open works better as a portrait of uncoiled passion than a boundary-breaking love story.

It‚Äôs so tempting to treat Eyes Wide Open as the preposterous melodrama that it easily could have been, but Tabakman manages to make a well composed, unemphatic, and fleet-footed drama out of the overheated material. A more restrained portrait of unconsummated desire might have been both more authentic and compelling, but a less titillating film would have attracted little attention. As is, it‚Äôs a fairly by-the-numbers taboo love story, regardless of its exotic setting. One wonders who the next Israeli gay romance will be about: An Israeli soldier and a Hamas resistance fighter? A Holocaust denier and a survivor? A kosher cook and a pig farmer?