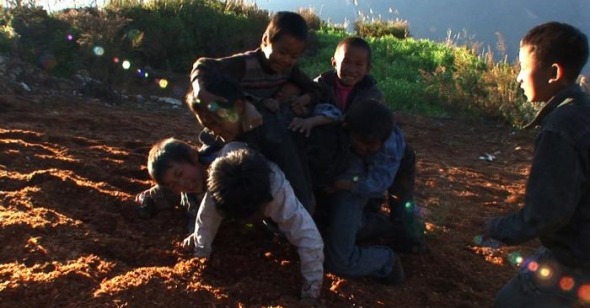 Since we cannot belong to all places and cultures at once, films that open a window onto the outside world will always be invested with a certain degree of documentary value. But in the case of China, the idea of cinema as a candid reflection of real life extends beyond this habitual, often unconscious response. The finest filmmaking to come out of the mainland this decade bears a commitment to updating us on the soul of the nation, and this duty has placed it in a tight bond with that old theorists’ whipping boy: realism. Much of the authority we find in recent Chinese cinema comes from its aesthetic of immersion, that documentary impulse which has been a guiding force in even the country’s apparently fictional films. Through a shared vocabulary of patient observation and extreme duration, today’s vanguard of Chinese directors have been voraciously hoarding away as much reality as they can—as if hyperaware that their landscape has never been more subject to rapid disappearance, and that there has never been greater international demand for stories of those living through this dramatic historical moment.

The astonishing ambition of these works is rooted in their desire to devour the society whole, and to deliver it to us under an illusion of a complete and comprehensive mimesis. But there are complications in this dream of totality. In their quest for an ultimate intimacy with the real—which serves as a corrective not only to the grand illusions of the nation’s authoritarian government but also to the fantasies of its big-budget prestige pictures—contemporary directors have coupled their righteous conviction in the power of cinematic verisimilitude with a scrupulously maintained remove from their human subjects. Even as they allow us to slip into faithful replications of time’s passage, these films hold us at arm’s length emotionally, lest we should mistake ourselves for anything other than outsiders.

It’s no surprise that Zhao Dayong’s Ghost Town—one of the most heartbreaking films to yet emerge from China’s prolific documentary movement—comes to us as a three-hour chain of patiently sustained shots. Nor is it a shock that the film immediately sets out to strike the requisite balance between in-the-field absorption and calm, respectful detachment. An establishing shot has us hovering over the titular Southwest town of Zhiziluo, which appears as a cluster of dilapidated structures tucked away in the mist-covered mountains. Once we’ve landed on the ground, we are greeted by a small group of locals (mostly members of Tibeto-Burman minority groups, the Lisu and the Nu) who seem to have been placed in the frame for the specific purpose of being filmed. The camera is positioned on the opposite side of a winding alley as they chat and pace back and forth, unsure of how to behave. Some look directly into the camera; one yells out, “Can you see us?” Their body language says: what is there to see here? What could possibly be so interesting? And as Ghost Town drifts through its three loosely organized chapters, each populated by lonely and disaffected people just trying to scrape by, we gradually come to understand their skepticism.

For them, Zhiziluo is to be fled from, not somewhere one would willingly linger. Few seem happy living in this small town that history has forgotten, and many are looking for a chance to escape to the cities, where the dangers of labor exploitation and forced marriage await them. But while we in the audience may know China as the inspiration for many a muckraking documentary and outraged exposé, the film’s subjects have to confront on a daily basis something less sensationalistic and more inscrutable than their own poverty: the facts of boredom and aimlessness. A typical scene finds the camera standing on the sidelines as a few townspeople gather in the street to smoke, gossip, or argue, often lowering themselves into a deep squat, sometimes with stray dogs, cats, and chickens looking on with disinterest. One is reminded of all the loitering and wasting of time in Jia Zhangke’s Platform and In Public because, as in those films, Ghost Town harbors no cheerful communitarian illusions, and instead depicts a world in which social relations are in a state of collapse.

The film is in fact structured as a descent into increasingly bleak cases of family separation. But one of its tiny miracles is that this downward emotional trajectory reverses itself, turning more hopeful, open, and life-affirming as the situations become more desperate. In the film’s opening third, we encounter a father and son, both Christian ministers, disagreeing about the Bible’s policy on dancing and playing instruments. Later, when the son is alone, he vents his frustrations about a father who has never paid much attention to him. In subsequent scenes he seems eager to draw the camera into a conspiratorial relationship, as if starved for the invisible confidant on the other side of the screen. The second chapter heightens the melodrama, with the central character dissolving into a basket case as he tries to forget a failed marriage that has sent his wife and children to the other side of the mountain. The film then closes with an episode that, at first glance, promises to play like a nightmare of hand-to-mouth existence, but then slowly, unexpectedly builds as an ode to a child’s survival instincts. Abandoned by both his parents at an early age, a young boy spends his day scavenging for food and, despite seemingly insurmountable hardships, manages to turn his small world into a playground for him and his neighborhood friends.

In case this description makes Ghost Town sound like two-hanky poverty porn, we should return to the issue of how—like his predecessors Jia, Wang Bing, and Ying Liang—Zhao carefully and subtly maintains his emotional distance and forestalls easy identification. It is important that so much of the film consists of the camera hanging around people to whom we are never formally introduced. Aside from a handful of fully developed characters, most of the figures onscreen are never endowed with a name or biography, even if they eventually become familiar to us through their frequent reappearances in the background. Zhao also makes it difficult for us to get a foothold in time and space. In contrast to the film’s long takes, extended running time, and inclusiveness of all kinds of mundane details—which create the illusion that a world has been offered to us intact—Ghost Town is riddled with loops and gaps. While there’s nothing conspicuous or particularly avant-garde about its structure, the film begins to acquire a spectral quality as figures seen in one section turn up in another, and as the three discrete narratives progress without any explanation of how much time lapses within them and where each stands in temporal and geographic relation to the others.

Yet another distancing effect, self-reflexivity is a favorite trope of the modern, self-knowing documentarian, a promise to the audience that the filmmaker is aware of what’s ethically at stake in the representation of real life. But in the few moments in Ghost Town where the camera is directly acknowledged, the gesture seems as much a foregrounding of the villagers’ media savvy as it is a reminder of the director’s influence on the action. As if to emphasize the pervasiveness of media in even this remote area, the director informs us that the orphaned boy who’s just gone out hunting small birds for lunch also has a TV set in his home. In a number of other scenes, the film opens itself up as an opportunity for performance, and the subject being filmed recognizes that he or she has been given a moment in the spotlight. Reunited with his estranged family, the self-pitying divorced husband of the second act holds his child in his arms, then asks the baby to plant on a kiss on daddy’s cheek. “Now that’s good cinema!” he exclaims.

What, in the end, is the point of distance in a documentary like this, other than to comfort some with the knowledge that poverty has been safely contained within the frame, and to relieve others from having to think through the intertwined feelings of guilt, pity, compassion, and fascination inspired by images of suffering? I have to admit that, for all my analysis of Zhao’s admirable detachment and restraint, I found myself overwhelmed, disturbed, and ultimately perplexed by the film—as if I had never before confronted this dilemma of being a privileged viewer shielded from the pain experienced on the other side of the screen, and as if my emotional response had exposed my own naïveté about both poverty and cinema. Zhao’s negotiation of our emotional proximity to his subjects makes us conscious of the screen as an impermeable divide constituting difference, delineating their entrapment from our freedom.

What makes this effect doubly haunting is the stoicism with which our conflicted gaze is met. Where other films might have framed these images of despair as an activist-oriented provocation, Ghost Town does not give off the impression of having been designed for political impact. Rather than taking on an aspirational tone or purpose, it exhibits a determination to see this life for nothing more or less than what it is. Many of Zhao’s subjects echo this sentiment. At one point, a tough old woman who we’ve seen sitting on street corners throughout Part Two finally gets her own close-up, and begins to perform a Lisu folk song equating life to suffering. “I’m free to do as I please,” she intones, “now that I’ve lost everything.” Her voice is so unsteady that song is indistinguishable from speech. She hears the lyrics and clearly means them, but doesn’t dwell on the song as a reflection of her own life. Instead she gives a wry smile, the words having already disappeared into the past, leaving behind a single moment of solace.