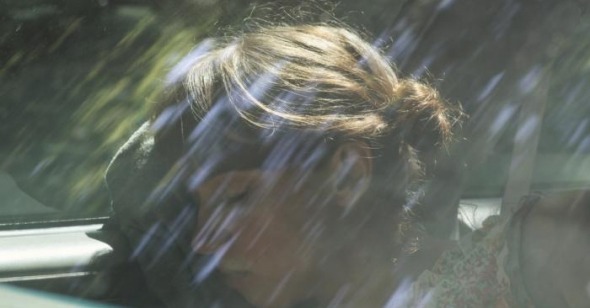 What Makes Her Tick?
By Michael Koresky

What will future generations of film folk make of the countless American indies made in the latter half of the twenty-first century‚Äôs inaugural decade that follow inarticulate youths as they graze absent-mindedly through overgrown fields of urban anomie? If these films are taken en masse, future sociocultural dissection may yield winning theories about a coddled generation, but on what level will they actually be enjoyed? Every era has its own claim on ennui and spiritual dislocation, especially trendy topics when paired with youthful hesitation and sexual confusion. But often such umbrella terms give unambitious artists license to justify their artistic lethargy on philosophical and aesthetic grounds‚Äîif the characters mope, so can the camera; if they‚Äôre inarticulate, then why bother writing dialogue? The tenets of realism become a black hole in which one can bury unnecessary details like story, momentum, motivation; staying on the surface equals ambiguity.

So does Bradley Rust Gray‚Äôs new Zoe Kazan vehicle The Exploding Girl come across like a story its filmmaker simply had to tell? Does it seem to contain a statement Gray simply had to make or a visual idea he had to express? Or does it just slot a mite too easily into a well-practiced movement currently hypnotizing American filmmakers from Andrew Bujalski to Joe Swanberg to Lynn Shelton and, to a lesser and more intriguing extent, So Yong Kim, Gray‚Äôs life partner? It would be unfair not to remark that each filmmaker does have her or his own particular brand of wayward, rambling dissolution‚ÄîBujalski offers tongue-tied, bemused procrastination; Swanberg, stultifying, vapid noncommunication; while Shelton‚Äôs Humpday tries to blend all this stammering with sophomoric hi-jinks. So Yong Kim manages to rise above it all with In Between Days by ensuring the difficulty to impart feelings through words stems out of cultural barriers. So, yes, each filmmaker attempts and achieves different narrative forms; but what they seem to have collectively done is perhaps irrevocably identify a generation as not only lost but also agonizingly inexpressive.

With no discernible intellectual pursuits or emotional interests, The Exploding Girl‚Äôs airy protagonist, Ivy (Kazan), becomes a perhaps intentional cipher. What we come to know of her over the course of a spring break back home in New York is depicted in a shorthand as transparent as one would see in any forty million dollar studio throwaway: in one shot we see Ivy teaching kids in some vague classroom setting (good-natured, giving); she visits the doctor, who talks of her history of epilepsy (troubled, potential danger on the horizon); her willowy longtime buddy and maybe one-day romantic partner Al (Mark Rendall, surprisingly not a member of Bishop Allen), who needs a place to stay and crashes with Ivy and her mom during the week, is sweet, disheveled, and childlike, with a black backpack drooping off his shoulders and topped with a mushroom cloud of greasy hair (she has hip friends). Once these traits are established, we expectedly follow her around the city via an artfully distanced camera, capturing Kazan‚Äôs face as it betrays little of an inner life, watching her chat and break up with a severely disinterested college boyfriend over her cell phone, all while the strongly foregrounded potentiality of a seizure shrouds the film in cheap, unearned suspense.

Of course, when she does finally, quietly ‚Äúexplode,‚Äù Gray keeps the camera at an expected remove, her fit elegantly obscured by a lamp blurred in the front of the frame, only an arm and a shoulder visible while a hapless Al simply sits over her, his back to the camera. It‚Äôs another example of an unwillingness to really dig in, to try to communicate what makes this who she is, and consequently why we should be remotely interested. Certainly kewpie Kazan, onscreen constantly, isn‚Äôt enough of a commanding presence to do all the heavy lifting: there is perhaps something remotely compelling in her wide, deep-pocketed stare, which, when coupled with a receding chin makes her seem like she‚Äôs eloped from a Keane painting. But she‚Äôs too constantly performative for someone whose life we‚Äôre supposed to be witnessing on the fly; she always seems aware of playing to the camera. And since the camera remains eminently, dully respectful, she‚Äôs at sea here. Making matters worse, the film relies far too heavily on her tentative flirting friendship with Al for dramatic tension: rarely do the actors seem like they‚Äôve known each other for more than the length of the film shoot. And if their listless outings together and sparkling sidewalk repartee is any judge, their alleged twelve-year relationship is predicated on nothing but mumbling, bumbling inanities (He, chewing on a soda straw: ‚ÄúDo you ever, like, want to have babies?‚Äù; She: ‚ÄúWhat, like, now?‚Äù; He: ‚ÄúNo, someday, like, I don‚Äôt know‚Äù; forced faux giggling, the conversation goes nowhere, and finally, he: ‚ÄúYou wanna go home?‚Äù).

The lack of meat in this meandering portrait of youth wouldn‚Äôt rattle so much if there were the sense of aged wisdom coming from its maker, but The Exploding Girl feels like it could have been patched together by any first timer twenty years his junior. Slapdash scenes of telegraphed ‚Äúplayfulness‚Äù (Al showing Ivy the toy spider he made out of a cell phone vibrator; Al showing Ivy the apartment once occupied by Nikola Tesla, unfortunately recalling the White Stripes‚Äô whimsical dialogue in Coffee and Cigarettes) are buffeted up against self-conscious images of directionless melancholy (Ivy staring at streets; Ivy staring in the mirror; Ivy staring at rooftops). If it didn‚Äôt all boil down to utterly unremarkable, adolescent issues like whether or not to kiss the girl and whether or not to call the boy, then perhaps its lack of engagement would have been more persuasive. And how to wrap up this portrait of charmless early twentysomething drifters? With a rooftop hymn to the beauty of flapping birds and girls‚Äô tear-stained cheeks. Worst spring break ever.